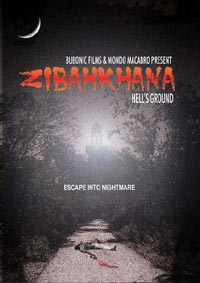 Omar Ali Khan - an aficionado and connoisseur of the weird and macabre lollywod/Punjabi cinema - has released his first directorial effort: Zibahkhana [literally, Slaughterhouse]. I hope that it gets out on DVD etc. as well. Our ChiTrib recently had Kim Barker's report, Zombies breathe life into film, that I read and railed against [It is not Pakistan's first horror film and 'serious' is not how I would characterize any of Pakistani cinema and the 'slasher genre' reached Pakistan soundly by the time of Wahshi Jatt or the masterpiece Maula Jatt]. Oh well. I remember, as a teenager, watching this awesome horror movie called Zinda Laash/Living Dead] during some cricket tournament and yelling juggats at the tv screen [Also catch the Bollywood version - Bandh Darwaza/Closed Door]. I hope Zibahkhana is as fun.

on a side note: Khan has a nice little ice cream shop in Islamabad called "The Hot Spot" (get it?), and it is covered with artwork from Pakistani horror films of generations past. The guy seems like he's obsessed...but their waffle with butter pecan ice cream is awesome.

Netflix had a Pakistani horror film once upon a time (a Dracula-version), but I can't seem to find it anymore...Amazon.com has it, and from the title sounds like the Zinda Laash sepoy refers to: http://www.amazon.com/Living-Corpse-Yasmine-IX/dp/B0002V7STI

Just so you know, Omar Khan, the Zibahkhana director, restored released Zinda Laash on DVD, the movie referred to earlier. There's a clear homage to it in Zibahkhana! It doesn't claim to be Pakistan's first horror film, it claims to be Pakistan's first contemporary horror film, something Maula Jutt can't really lay claim to! I hope you enjoy it, it's bloody good fun.

ZIBAHKHANA - HELL'S GROUND just won a Special Jury Award for the BEST GORE at the Fantastic Film Festival, Austin TX. ZIBAHKHANA has been - after a long struggle due to the digital format of the film - been granted a screening for the Pakistani censors and if all goes according to plan, the film should be hitting the odd screen in Pakistan very soon indeed.