Since moving to Berlin, I haven't watched any Fox or gone to political websites or kept up with all that stuff. Guido keeps me up. Check this, though. Huma Imtiaz and Rahma are twittering across Sindh/Punjab and beyond (follow them here and here) and snapped this at a bazaar in Multan. 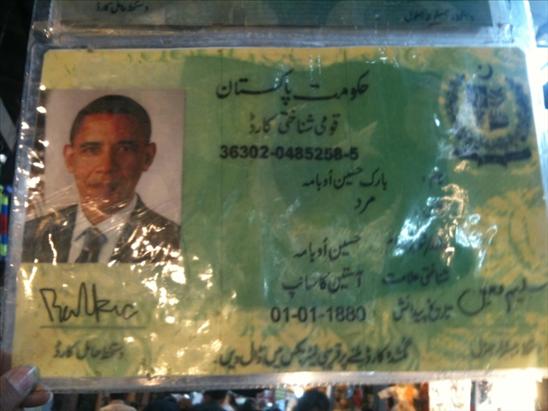 The reason it makes it a worthy induction into the Yes! series is that the entry for "Distinguishing Marks" reads Aasteen ka Sanp - literally the snake which lives in one's sleeve. An idiomatic phrase, this is a contraction of Aasteen mein Sanp palna - to nurture snakes in one's sleeve - meaning to keep one's enemies at really close quarters. As Mushafi (1748-1824) said, Daytah hai apnay dil mein us zulf ko jo jahGah/Goya kay Aasteen mein wo sanp palta hai - Whoever gives that (curling, maybe) Lock (of hair) a place in his/her heart; It is as if he/she grows a snake in his/her sleeve. Wow, that is the least effort I have ever made in a translation.

So, Obama then, in Multan, is a snake, hiding in someone's sleeve (Zardari?). Brilliant.

An exceptional post! Thinking to myself that this is the sort of fodder that conservatives in America need to fuel their confirmation biases. No American passport or birth certificate would stand a chance against this revelation!