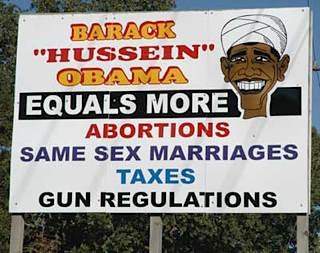 No offense, but those people are colossal d**ks. If I had any doubt in my mind about my choice of Obama, these videos laid them to rest.

And this is why I'm not taking this all for granted.

see also: http://talkingpointsmemo.com/archives/223460.php as for taking it for granted, I'm hoping this filth only serves to get more of us out there hitting the pavement, phones, etc. to counteract it.

I'm sitting in my flat in Copenhagen, looking at this stuff as I prepare my absentee ballot, getting more and more depressed by the second. I'm with you, ADM, I won't believe it until I see Obama on the podium being sworn in. In the meantime, I do what I can to follow the campaigns from abroad; I watch videos like these, and as much as I try to convince myself that what's captured here is an exceptionally idiotic and vocal minority, I can't help but marvel at the stupidity (and venomous, primal hatred) on display here. I was an undergraduate in Boston in the late 60s, so I can tell you truthfully I've seen shit like this before — yet still I'm astounded! Somehow it seems worse now, because what's required to make an informed decision can be found everywhere, in plain sight, almost instantly, even halfway around the world. But these are people who defiantly believe, and defiantly proclaim their belief, in lies not only absurd in content but obscenely transparent, ignoring all actual evidence to the contrary, in order to preserve their miserable world view. It's not so bad that they believe everything Democrats tell them is a lie, but that they think people like McCain, Palin, and Bush etc are truth tellers; that McCain is an agent of change, and Palin is a victim of a left wing dominated media witch hunt. These are the same people who believe that angels exist but evolution is bunk; who go to church on Sunday and believe it when they are told that they — and only they — are saved. I think it wouldn't be difficult to convince such as these that war is peace and freedom is slavery. It's clear they already believe that ignorance is strength. And maybe it is. Sorry to rant on your dime, Sepoy, but I just couldn't watch these videos in silence. If these — my fellow Americans — prevail, I am definitely not going home.

Ultra-left sectarian that I am, I really must say that the problems is not with "them," it's with "us" in the sense that for too long people on the left with their "Anybody But Bush" blather have given the Democrats a free pass to cease acting as a political opposition. Just to name a few, presidential signing statements (stating the president's intention not to enforce the law he is signing), suspension of habeus corpus, torture, cynical union-busting, warrantless wiretapping, and deliberate deception of the electorate have all been very largely ignored by the Democrats, not only when they were actively being advanced, but now during the election as well. This has been the most shameful aspect of Obama's "above the fray" rhetoric. So it is small wonder that the country has degenerated as it has done. There was nothing that Bush and the Republican Congress could have done that would have caused irreparable damage so much as the near-total depoliticization that has taken place with full participation by the Democrats. That said, I think it is pretty clear that the Republicans will not stop short of fomenting the politics of assassination. For those who follow their logic, it will be morally incumbent to stop Manchurian Candidate Obama from becoming President, a patriot's duty to keep the foreign terrorist from taking over the country. To Zalman I would add that things are not and will not be any better in Copenhagen. This is not an American problem. The depoliticization and massive growth of the far-right we are seeing in the U.S. now is in fact global.

Spencer, I agree with about at least 2 things. That an Obama presidency, if he even survives that far, could very well be met with a hail of bullets; and that the growth of the far-right is world wide, and means one can't be complacent in Copenhagen or anywhere else, although it would be a lot easier here to adopt a WTF expatriate insouciance. As for your prior arguments, though, you kind of lost me at "sectarian". Non-ultra-left depoliticized naif that I am, I'm not quite sure what that means, but I firmly believe that if Bush had been defeated in 2000 and/or 2004, things would not be exactly the same as they are right now. Maybe it's blather, but it beats saying that it makes no difference who we vote for, which I think is another kind of blather I've heard all too often. I have an even more simplistic explanation, which is that approximately half the voters got what they thought they wanted. I'm not one of them, and I certainly haven't ignored any of the travesties you speak of. I'm afraid I'm at a loss to explain why a larger segment of the population can't figure out to act and vote in their own interest. It isn't enough to say people have been deceived, because they're complicit in their own deception. They elect politicians who lie to them, and their politicians oblige them by lying some more. That is their mandate. Right now, I'm just gonna vote, and hope this time it actually counts with the majority. Obama wasn't my choice in the primary, but yes, I'll gladly accept that Obama/Biden are "not McCain/Palin", if only for the 3 Supreme Court Justices that will likely need replacing in the next few years. And hope Obama survives long enough to do accomplish something.

BTW, people I talk to in my neighborhood share the view that Obama won't survive. I've already been at a loss to disagree with them. But I've got an even darker scenario, doubtless you've thought of this as well: McCain gets elected, and then HE gets shot. Or he just goes down with a "heart attack". Who would ever know?