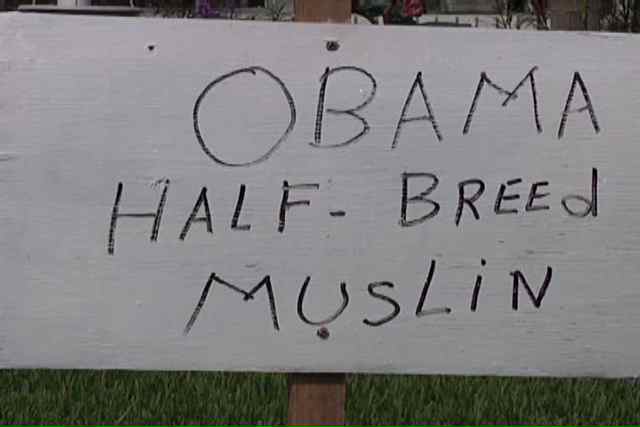 The golden age of political signage is upon us. [HT, wonkette.]

The Era of Negative Sentiments is very definitely be upon us!

"Muslin is a type of finely-woven cotton fabric, introduced to Europe from the Middle East in the 17th century. Its first recorded use in England was in 1670. It was named for the city where Europeans first encountered it, Mosul, in what is now Iraq, but the fabric actually originated from Dhaka in what is now Bangladesh." I'd wear that.

I love how people are dumb.

Yeah hey professor take a break from campaigning for Obama. We need this election, the world needs to this election. We can't have you be bowing down putting your forehead on the sidewalk in the middle of an Ohio street for Fajr scaring the natives. Also, Lets try to appease the racists by saying: He's HALF white. thats good, right!?

It's a shame that stupidity doesn't always cancel evil so neatly.

Obama himself didn't do much to quell this particular "slur". "What is disturbing about the campaign's response is that it leaves unchallenged the disgraceful and racist premise behind the entire "Muslim smear": that being Muslim is de facto a source of shame. Obama's supporters often say they are being "Swiftboated," casually accepting the idea that being accused of Muslimhood is tantamount to being accused of treason. Substitute another faith or ethnicity, and you'd expect a very different response. Consider a report from the archives of this magazine. Thirteen years ago, Daniel Singer, The Nation's late, much-missed Europe correspondent, went to Poland to cover a hotly contested presidential election. He reported that the race had descended into an ugly debate over whether one of the candidates, Aleksander Kwasniewski, was a closet Jew. The press claimed his mother had been buried in a Jewish cemetery (she was still alive), and a popular TV show aired a skit featuring the Christian candidate dressed as a Hasidic Jew. "What perturbed me," Singer wryly observed, "was that Kwasniewski's lawyers threatened to sue for slander rather than press for an indictment under the law condemning racist propaganda." "Occasionally, though not nearly enough, Obama says that Muslims are "deserving of respect and dignity." What he has never done is what Singer called for in Poland: denounce the attacks themselves as racist propaganda, in this case against Muslims. " http://www.thenation.com/doc/20080317/klein

Yes, Salman. As I said, back when: {{site.baseurl}}archives/imperial_watch/an_open_letter_to_senator_barack_obama.html

Sepoy, Well-written open letter :-) Obama isn't using the inflammatory rhetoric of the crusader president in foreign policy matters pertaining to the "Muslim World.” and that kind of tone will have a positive effect on matters regarding Muslim Americans. However, will he directly address the matters of the Muslims at home is the golden question. "Is it easier for the American administration to reach out to the “Muslim world” than it is to deal with Muslims in America?" http://www.agenceglobal.com/Article.asp?Id=1963 "Bringing it all back home: Obama's efforts to repair relations with Muslims abroad are admirable. But what about those living in the US?" http://www.guardian.co.uk/commentisfree/cifamerica/2009/apr/09/barack-obama-islam-muslims-us Btw, I noticed your use of the term "Islamicate". I think, it was Marshall Hodgson who coined this appropriate and inclusive term. I know that some people like Carl Ernst use it but by and large it is still the "Muslim world" or the "Islamic world." Do you think that it will ever catch on, at least with "experts" or intellectuals? I have by and large resigned myself to using imprecise terms like the Middle-East (and the less ambiguous term - Muslim world), which can pretty much mean whatever one wants it to mean and includes whichever country one wants it to include.