It is odd when I see figures from my dissertation in popular media. But this cartoon from alQuds riffs on the new PM: Cloning Hajjaj b. Yusuf is the solution for the US in Iraq. 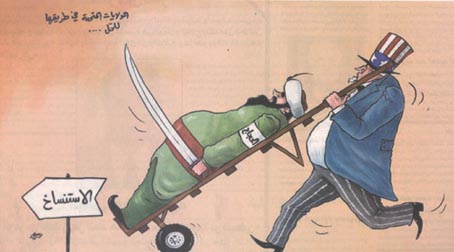 For those not up on their TabarÃ“, al-Hajjâ€šj b. YËšsuf al-ThaqafÃ“ (d. 714) was the lieutenant of Umayyad Caliph 'Abd al Malik (c. 692-705) whose claim to fame is being the most brutal Muslim ruler in the Islamic past. He came to power, over the eastern empire in c. 694, with Kharajite, Kufan and Basran factions raging rebellions all over Iraq. Stocking his army with Syrian tribes, Hajjaj unleashed some supreme ass-kicking (well, beheadings really were his forte). To get the Kharajites out of Mecca, he bombarded Ka'aba. This guy had no fear. In c. 701, he built a new capital in Wasit - between Basra and Kufa - so that either city/faction can be brought under army control should a rebellion start again. He was especially harsh on the Kharajite rebels who had tried to assassinate him several times. Eventually, sponsoring the expedition that send Muhammad b. Qasim to Sindh in c. 712 (to hunt down Kharajites NOT to rescue maidens).

But his greatest sin was his treatment of the old notables of Mecca and Medina who never forgot the terror of Hajjaj. His name became synonymous with brutal dictatorship in Arab poetic traditions. While he had the good luck of dying a natural death, his family and tribe suffered the wrath of his enemies once they got into power (being hacked to death by dull swords and sewn into leather skins alive were the two popular means of revenge on the Thaqafites).

>> Eventually, sponsoring the expedition that send Muhammad b. Qasim to Sindh in c. 712 (to hunt down Kharajites NOT to rescue maidens). Interesting. Both the Pakistanis and the Indians will be surprised to read this since it goes against their national mythologies.

I know. My friends familiar with my research are all rooting for a fatwa. I am hoping more for a James Laine type deal that I can just avoid by not visiting until the govt. changes.

To get the Kharajites out of Mecca, he bombarded Kaíaba. Wasn't the Ka'aba damaged in Hajjaj's fight against Abdullah Ibn Zubair (who was no Kharajite)?

Zack: You are quite right. I blame blogging. Abdallah b. al-Zubayr was a claimaint for the caliphal throne, against 'Abd al-Malik, who had ensconed himself in Mecca. Along with his brother Musab, he attempted to fight off both the 'Umayyad and the Kharajites. However, once 'Abd al-Malik started to triumph against the Kharajites in Iraq, they tried hard to claim al-Zubayr to their side and send bands and emmissaries to Mecca. The kharajites were split into camps by now, so while the al-Zubayr was fighting the Azariqa (of Ahwaz), he was approached by the Kufan contingent. It was all moot becasue 'Abd al-Malik's Syrian army quickly wasted everyone. When al-Zubayr's followers deserted him (for Umayyad positions), Hajjaj's offensive was a seek-and-destroy mission. The Kharajites of Kufa were the other targets.(la hukma illa li'llah).

Yeah I had no idea that there was an alternative theory to the "Muhammad b. Qasim rescuing the fair maidens" one. Sepoy, could you maybe refer to some sources that provide a bit more detail to the story? As the first commenter said, this myth is ingrained in Pakistani nationalist mythology. I remember reading government authorized Pak Studies book once in which the question was posed "When was Pakistan formed?" The answer that given was: "Since the day that Muhammad b. Qasim set foot in Sindh to rescue the kidnapped women, etc." Loved it. Anyways, hook me up with some references so I can look it up. Cheers.

Chanad: I am delivering a paper on this and will post about it when the time comes. The shortest answer is that the earliest source of the Arab invasion to India is Baladhuri's Futuh al-Buldan. You can easily get it. No maidens are mentioned. The maiden tale comes from a c. 13th persian source and is redolent of Alexandrian tales. To deconstruct the whole narrative and to show the aims of the Pakistani state in propogating it, is to write my dissertation. Which I am. I swear.

Hajjaj B.Yusuf will also be always remembered for his great work and efforts on putting A'raab on Arabic Scripture of Quran , hence making Quran easier for those whose first language is not Arabic. P.S. After you hand in your dissertation, go live in ALPS for atleast 2 years !!

Sepoy: Okay, I guess I'll just have to wait. Do let me know when you're done with your dissertation though. I recall reading a couple years back some story about the maidens running away from their captors in Sindh and hiding in a building (or maybe it was a cave). This place is located somewhere north of Hyderabad (near Rohry I think) and the site has become a pilgrimage/tourist site now. I can't remember the details of the story, but I remember seeing the pictures. I'm just wondering if you did any research about this, and if you know how this all fits in. Thanks! (p.s. the Alps sounds like a good plan to me)