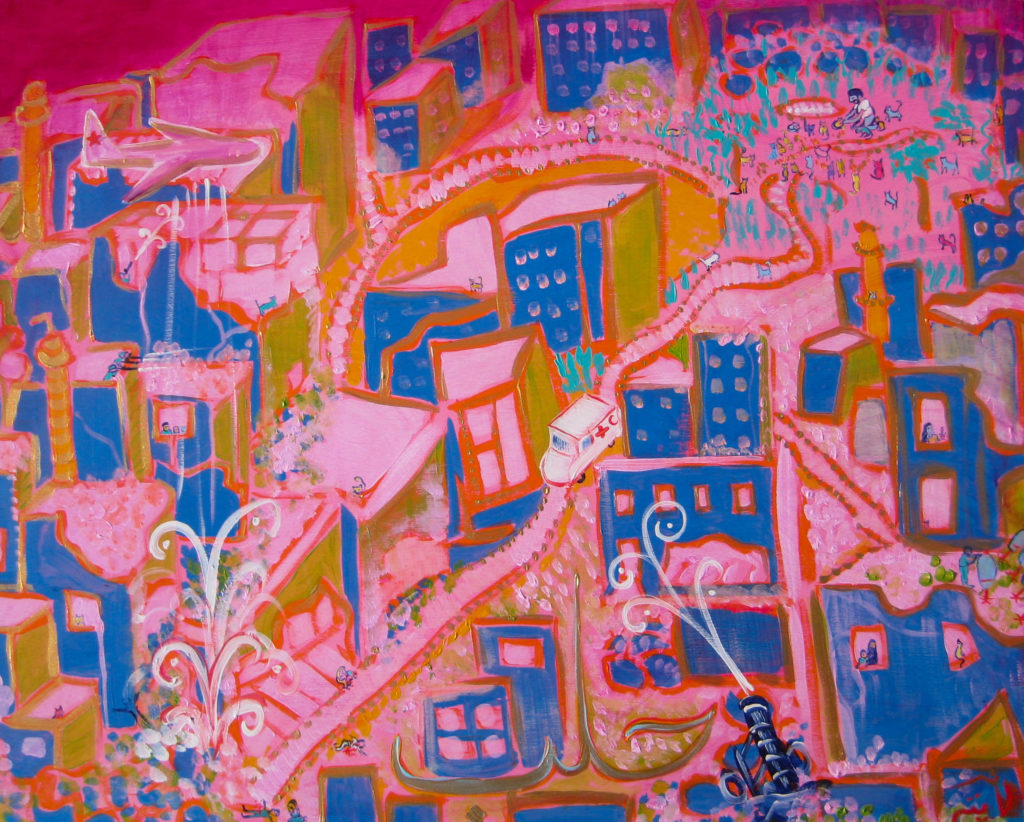 Aleppo is a city in Syria. Aleppo is a city near-destroyed by civil war. Aleppo is besieged. Aleppo is a refugee crisis. Aleppo is the site of an international proxy war. When ill-informed Libertarian presidential candidate Gary Johnston asked this question on a cable talk show this fall his hosts didn't even know where to start. Did he think he was on Jeopardy? Did he answer any other questions in the form of a question? What levels of ignorance would cause a politician running for major political office to ask 'what' Aleppo is, rather than 'where' it is?

When I was first asked to participate in a group exhibition organized around the theme of the painter Grandma Moses's artwork at our local museum, I laughed. I couldn't imagine what I could contribute. Grandma Moses painted 'primitive' style landscapes populated by tiny peopleâ€”usually pastoral Vermont scenes. What could be further from my work? But after some thought, I realized that Moses's technique for creating in her paintings a totality of a place by ignoring various features of realism such as perspective and proportionality were a perfect way to capture something I'd been thinking about a long time: how to portray life in the war zone of the Syrian city Aleppo.

As an artist who is in fact located in the pastoral and idyllic setting of Vermont, far away from the horrendous civil war in Syria, I have only scattered glimpses of the landscape in Aleppo. The primitive style allows me to piece together these shards, gleaned from photos on the internet from journalists, civilians, and even militants, and construct an imaginary piece of city. The organizing principle of my painting, and the inspiration for this reconstruction is a civilian by the name of Muhammad Alaa Aljaleel, a man who fled the city with his family to Turkey, but returned alone, unable to tolerate the idea that Aleppo would be totally abandoned by civilians. Muhammad then set up a cat shelter, where he feeds cats who have been left behind in the city, either because their owners have died or have fled. He also looks after dogs and even farm animals and works tirelessly to help out orphaned children left in the city.

There are no good guys in the Battle of Aleppo, which has been ongoing since 2012, with over thirty thousand dead. The Syrian government is backed by Russia, Iran, Hezbollah, and others, and the rebel forces are fragmented, some backed by Al Qaeda-allied militant groups and covertly by the US and NATO. The UN has called the Syrian Government's relentless shelling of civilians 'an extermination.' Similarly, they have expressed horror at the indiscriminate attacks on civilian targets by the rebel groups in the current round of fighting, in which the rebels are attempting to break the government siege of the city which has isolated the eastern part of Aleppo from all supply lines.

Muhammad Alaa Aljaleel's cat shelter is located in the besieged rebel-held eastern section of the city. Every day, Muhammad posts to Facebook numerous photos of dozens of cats gnawing on bones and eating little scraps of meat. These images are in fact some of the only signs to the outside world that civilian life still exists in eastern Aleppo and that all the residents are not dead, wounded, or long-fled to fates that have been proven to be just as deadly, and welcomes that have been far from warm.

It could be argued that a state of siege and civil war is hardly a time to concern one's self with cats, but I believe that Muhammad's shelter is an amazing act of protest against the inhumanity of perpetual war. His refusal to turn his back on living creatures, or choose sides, or take up arms, all this is a powerful demonstration of non-violent resistance to the inhumanity of war.

This painting will be for sale in a silent auction to benefit the Bennington Museum, in Bennington, VT. The auction will be open for bids from November 25th to December 29th, 2016. Half the proceeds will go to the museum, and the other half will be donated to Muhammad Alaa Jaleel's cat shelter in Aleppo, which is still able to receive funds. Please contact the Bennington Museum with bids after November 25th.