[Gentle Readers, let me introduce to you another member of the CM family:à¨®à©à¨Ÿà¨¿à¨†à¨° Ù…ÙÙ¹ÛŒØ§Ø± mutiyar who prowls the streets of Lahore in a bael-gari and whips any machar she encounters. She is currently finishing her B.A. She is the best. We like her. We hope you do, too. - sepoy.] 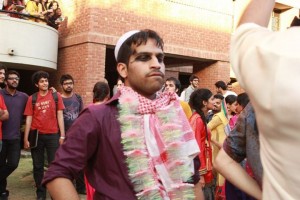 “Some might see this as racism but it's really funny to see all your friends doing stupid stuff."

I've met students from LUMS who have participated in those popular “Paindu Day” and "Daaku Day" festivals where youths dress up like stereotyped Punjabis, Sindhis, Pashtuns, etc to show their self-proclaimed “appreciation” for aforementioned cultures in Pakistan. The appreciation, however, is lost somewhere in translation and ends up only becoming trite and typical of mostly rich students studying in a university located in a gentrified housing residential area. Obviously the last detail is conveniently brushed aside. The usual trajectory of such a conversation goes like this:

Interviewer: So, tell us more about the motivation to “appreciate” rural culture in this particular way?

LUMS student: Well, yaar, dekho. My driver na? He's from some duur daraz village and he talks in such a funny way like he bumps off words and sounds like your typical paindu. Then there's Sheeda Tulli or Bhatti in your Punjabi movies and even Urdu dramas, and they all look so hilarious and happy despite not having much na.

Interviewer: You decided to appreciate this culture by wearing excessively bright and tacky garb, black marker moles on your cheeks and keeping mid-parted oily hair?

LUMS student: Aho! That's how paindus say it, right? AA-HO! Ho, get it? I'm hilarious. My friend laughed at my brilliant mimicking — I mean appreciative impersonation — of the jaahil painday for, like, hours, yaar. 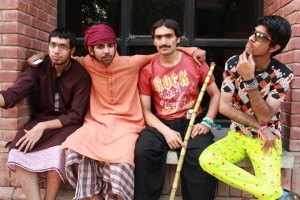 I: And you saw nothing wrong with it?

L: Yaar, please. Racist hogi tumhari dunya mai. Idher scene chill hai. Only over-sensitive uncles and aunties will be offended at our appreciation of rural people. Ek to you guys want representation and then tum laug fauran bura mana letay ho. Look at this black mole I put on my cheek to look like one of them. And check out my pagri and my fake mustache that I'll twirl dramatically like every done-to-death Punjabi villain in movies does. My girlfriend here put on a tub of makeup to look happy and cheap si like those paindu girls. Someone really needs to teach them what to wear, you know?

L: My other friend appreciates Sindhi culture so he dresses like a Daaku (bandit). I love the diversity in Pakistan, man. Another friend of mine pretends to eat niswar and wields a fake machine gun to look like a Pathan and — 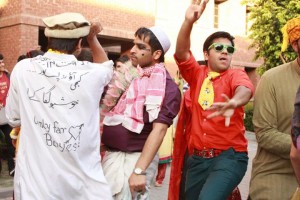 L: Yeah, whatever you call them. They smell weird, hai na? This is appreciating cultures in Pakistan. What's the big deal! Khocha, come on! Maybe we could find a bachi who puts on a topi burka for the day and acts like a subservient Pathani wife which is so hilar — 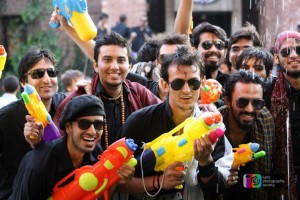 L: Lighten up, yaar! We're appreciating culture. Besides, we do pay the dhol wala a good amount of money and I'm sure the janitors on campus love to see us copy their accents. They know we're appreciating them.

L: My idea of showing interest in the cultures of Pakistan is by acting like them. Don't lie. You know they're misfits in the city. I don't hate them, though! I certainly do not have a superiority complex either...

I: But you would never let them sit on the same couch with you, right? Or embrace you on meeting because, you know, they smell “different” and you don't want your peers to see you in questionable company, correct? Ever considered taking them to Gloria Jeans with you? Maybe for dinner at CTC? Or will they be told to wait in the car? 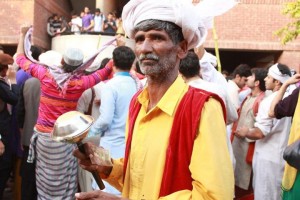 Photos via here and here.

...the "not putting up pics of the girls due to privacy issues of girls" disclaimer on the FB page speaks miles. Girls just cant be seen to "wanna have fun" even if it is paindu fun.

Just to set the record straight, Daku Day and Paindoo day cannot be lumped together. 'Paindoo day' is no doubt insensitive and insulting to certain cultures and people and it's stupid to try and justify it as an attempt at appreciation. But I have never during my four years at LUMS and even after that heard anyone associate Daku Day with cultural appreciation or cultural humiliation etc.. There is no 'cultural group' in Pakistan where banditry and robbing is a part of tradition. My point is that the two days cannot and should not be tarred with the same brush. On Daku day students dress up as bandits (the way they are usually portrayed in South Asian TV and film) and 'attack' each other with water guns, try and go all Gabbar Singh on their juniors and get money from them (the latter is the only valid objection that can be made against Daku day: some students might feel bullied although most of them take it in good spirit). There's nothing racist in that.

And the third day of the color week was conveniently skipped? The Yo-day, where the guns are pointed at the Western, pop culture in the very same fashion. Perhaps that would've made it a little difficult to prove what you were trying to prove here? Don't you think you are being a bit too quick in making the generalizations, as it's quite evident the interview is all made up with hardly any real interaction with any student who was participating in it? It only shows your narrow mindedness, as the whole point seems to be publicizing your own preconceived notions with selective (and made up) examples, being taken totally out of context to suit your own thinking!

I wasn't the only one who hated these so called festivals. Always rubbed me off as elite. Thanks for this.

I completely agree with the point the writer is trying to make. During my studies at LUMS, I hated this so called 'paindu day' the most. In reality its a disgusting humiliation of the rural and lower and middle class by the so-called elite . You dont need a special eye to see the superiority complex pasted on the faces of the people who participate in it. They are only fooling themselves by saying its not racism. P.S: I partially agree with fatima above, daku day should not be lumped with paindu day. although there are some bad incidents by some stupid people on that day too. but still I wont say it racism. but if someone associates it with sindhis on anything he is a low life racist !

To the Author. I am deeply impressed by the fact that you chose so articulate a person to represent the Lums student body. See what I did there? Sarcasm (if you missed it). There is another among that class of literary and social devices called satire. I hope you are aware of it. Now this is just my humble and personal opinion but 'Daaku day' (closely relates to the atmosphere of fear of being mugged or a victim of violence in pakistan), 'Paindoo-day' (relating with the vast economic and educational disparity) and ''Yo-day' (reflects on the cultural disparity between classes in contrast to 'paindoo day') satirize the various problems in Pakistan and more importantly the world in which we students are going into. Of course I do not imply in any way that they are meant to. For most of us they are an opportunity to dress up and have some fun. Nevertheless these 'offensive' events in which we celebrate and are subjected to the violence and bullying of Daakus and appreciate the shear difference between the cultural differences of the upper or lower classes do give us something. You feel they are offensive. I might agree with you but for the diversity of backgrounds that people at Lums come from which though predominately upper-middle or upper class is made of a sizeable minority of people who could not have afforded a Lums education if not for the sizeable financial aid Lums provides many students. These events are a batch activity and to my knowledge no one has ever felt offended by them. In my lay person understanding of it all I can say is that it is healthy to recognize our differences and laugh at how minor they are whether it be an accent or an overgrown mustache or wandering around in shorts or choice of grammar. I hope I have not offended you. People are too quick to take offense in this nation. Burning Mosques, Temples, homes and people at the very first sign of a perceived offense. I personally have been lucky enough to be surrounded by people who take a dim view of being so quickly offended here at Lums. Respectfully. A Lums Student.