Below the fold, two great events in NYC coming up. Do attend and support. 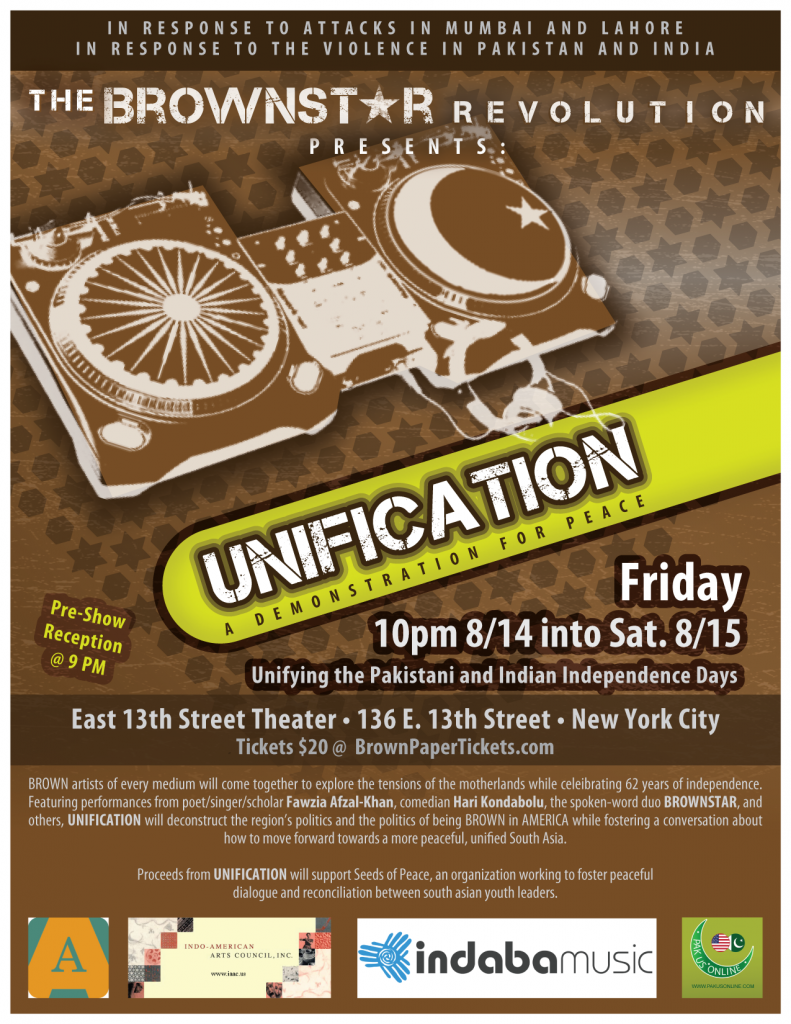 BROWN artists of every medium will come together to explore the tensions of the motherlands while celebrating 62 years of independence. Featuring performances from poet/singer/scholar Fawzia Afzal-Khan, comedian Hari Kondabolu, the spoken-word duo BROWNSTAR, and others, UNIFICATION will deconstruct the region's politics and the politics of being BROWN in AMERICA while fostering a conversation about how to move forward towards a more peaceful, unified South Asia.

Proceeds from UNIFICATION will support Seeds of Peace, an organization working to foster peaceful dialogue and reconciliation between South Asian youth leaders.

About Seeds of Peace
A 501(c)(3) public charity founded in 1993 by journalist John Wallach, Seeds of Peace is dedicated to empowering young leaders from regions of conflict with the leadership skills required to advance reconciliation and coexistence.

In 2001, Seeds of Peace launched a program for Indian and Pakistani youth from diverse economic and religious backgrounds. Through a year-long program and the coexistence program at the Seeds of Peace International Camp in Maine, Indian, Pakistani and American facilitators challenge the youth to open the wounds of history and delve into the religious, political and territorial battles that have sown so much mistrust and bloodshed. Over the course of the three-week coexistence program, insults, tears and rage are gradually replaced by words of compassion, understanding and sincere attempts at reconciliation.

About Fawzia Afzal-Khan
Fawzia Afzal-Khan is a performance artist, working in the classical vocal North Indian tradition, and founding member of the theatre collective, Faim de Siecle, with whom she recently performed in the World Premiere of Five Streams at the Asia Society. She holds a PhD in English Literature from Tufts University and is a professor at Montclair State University. Fawzia is completing her memoir, Sahelian: Growing Up With Girlfriends, Pakistani-Style, set in Lahore and the United States. In addition to her career as a musician and academic, she is an accomplished poet and was a finalist in the 2000 Annual Greenburgh Poetry Competition.

About Hari Kondabolu
According to the Seattle Times, Hari Kondabolu is a "young man reaching for the hand-scalding torch of confrontational comics like Lenny Bruce and Richard Pryor." An accomplished and socially-minded comedian, Hari holds a Masters in Human Rights from the London School of Economics and has performed on Jimmy Kimmel Live, Comedy Central's Live at Gotham and was featured in the 2007 HBO U.S. Comedy Arts Festival. Additionally, his short film MANOJ, which he wrote, co-produced and starred in, was selected to play at the Just for Laughs Festivals in Montreal and Chicago. You can learn more about Hari at www.harithecomic.com.

About BROWNSTAR
In a sky of black and white,
a BROWNSTAR shines bright.

BROWNSTAR is a two-man spoken-word duo bursting forth from the pens and dreams of emcee-poet-performers PUSHKAR NORTH STAR SHARMA and SATHYA SOUTH STAR SRIDHARAN. Grown in the Heartland of America but Flavored with the Masala of the Motherland, BROWNSTAR shouts what often goes unheard, giving BROWN a voice and songâ€š presenting a fresh perspective and exploring the contradictions, complexities, and epiphanies of South Asian identities. Utilizing original performance pieces, BROWNSTAR walks the tightrope of hyphenation, their stage show ignites a conversation about South Asia and its diaspora, exploring everything from Kal Penn to Rushdie to the legacy of Gandhiji and the contemporary politics of The-Louisiana-Governor-Formerly-Known-As-Piyush. BROWNSTAR reveals its unique perspective while asking those timeless, human questions about our world, our galaxy, and our universe. 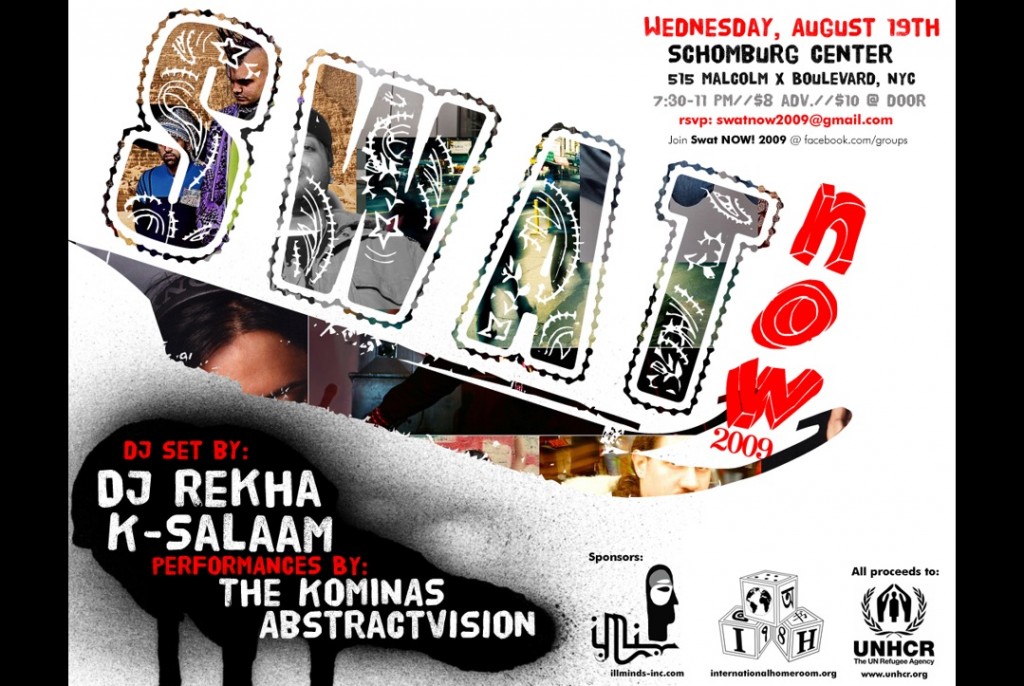 We are reaching out to you today with an urgent call to action! As you may know, the impending humanitarian crisis in the Swat Valley as a result of the ongoing military operation in Pakistan has left millions of people displaced. In fact, it is the largest internal displacement in a country since Rwanda and is the largest mass displacement in South Asia since the partition.

The UNHCR (United Nations Refugee Agency) has been providing clean water and shelter in the region since the conflict began. They are looking for our support to help provide aid to the millions of civilians who are caught in the crossfire. CLICK HERE for more information.

We are hosting an emergency benefit concert on Wednesday, August 19th, 2009 to raise money towards this cause. Headlining this event are DJ Rekha of Basement Bhangra fame as well as the infamous underground producer, K-Salaam. There will also be performances by The Kominas and AbstractVision. Doors open at 7:30 p.m.

***100% of the proceeds will be donated to the UNHCR and their ongoing humanitarian relief operation in Pakistan, as well as their work in Iraq and Sudan.***

This project is fueled by a singular directive: that one of the most potent ways to improve the public image of Islam here & abroad is to unite under the very Islamic banner of "goodwill towards all mankind." But, of course, we can't effect change in the world around us completely alone...

WE NEED YOUR HELP! Please click on the links below to make your donation TODAY! PLEASE RSVP at

CLICK HERE to join the "Swat NOW! 2009" group on facebook.com & get more information.
Ali & I would love to see all of your supportive, music-loving faces there on AUGUST 19th!

SPREAD THE WORD ABOUT THIS IMPORTANT EVENT!!! Please forward this message to everyone you know!

THANK YOU SO MUCH for all of your anticipated support!!! We really appreciate it but we suspect the people of Swat Valley, Pakistan will appreciate it even more..
Gratefully,
Nazneen Patel
Ali Abidi

Donate another amount to SwatNOW2009!

*All donations are tax deductible through our sponsor, International Homeroom's non-profit status. Please email us at

the only downside to a summer in Istanbul is missing the pleasures of a summer in NYC. ps: Hari Kondabolu is a) teh funny, and b) a fellow traveler of the Blue Scholars crowd back in Seattle. He and Sabzi and Geo did a little foto/food tour of queens and blogged it all here: http://harithecomic.blogspot.com/2007/08/tour-of-queens-with-blue-scholars.html (warning: dosa pr0n.)

hmm, maybe i'll attend if i'm around! elizabeth, are u still in istanbul? i'm fairly certain ur the same person i worked for the obama campaign with in philadelphia (remember aysha and i?)

Hi Nikolai--yes, and yes. it's a small internet!