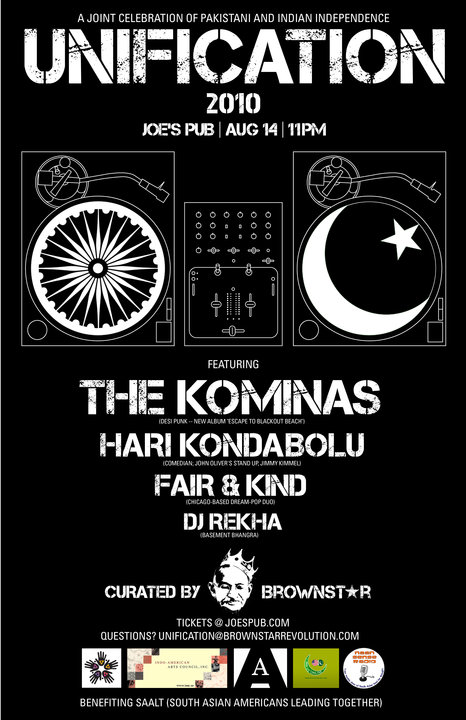 From the inbox, a great event in NYC, hosted by Brownstar Revolution:

Commencing at 11 pm on Saturday, August 14 (Pakistan's Independence Day) and continuing into the early morning hours of August 15 (India's Independence Day), UNIFICATION 2010 celebrates 63 years of independence and the voices of talented, socially conscious South Asian/American artists. With performances by DJ Rekha, The Kominas, Hari Kondabolu, Fair and Kind, and others, UNIFICATION 2010 will explore the politics of our motherlands, reveal the experiences of being brown outside of it, and question the tensions between us, while fostering a movement towards a more peaceful, unified South Asia. Proceeds from UNIFICATION 2010 will support South Asian Americans Leading Together (SAALT).

If you are in NYC, you should go - say hi to the Kominas or, more appropriately, yell something obscene at them.