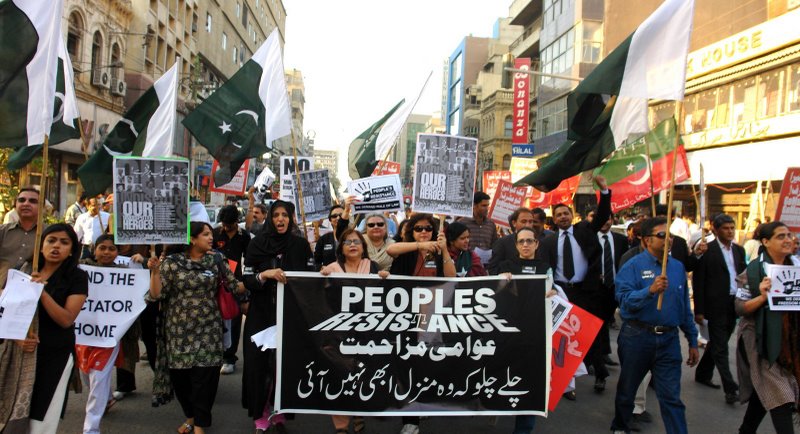 Guilty as Charged: Farhat Haq, a professor of political science in Illinois, tells us how the Emergency came to her. "A warrant has been issued for my arrest, despite the fact that I am thousands of miles away from the trouble. I accept this warrant proudly. In a way, it is no mistake. If it is criminal for a daughter of Pakistan to long for freedom and justice, then I plead guilty."

Relevance of Bulleh Shah: Ayesha Siddiqa, author of Military, Inc., attends a play on the life of a seventeenth century mystic. "It is important to know if the ruling elite thought beyond the message of secularism of folk religion and looked into the deeper issue of how woeful is the life of the common man and it is this that must be changed. The elite shy away from creating institutional mechanisms to ameliorate the problems of the poor."

Seeking the personal and the literary in the current crisis in Pakistan is quite easy. Bulleh Shah, Habib Jalib and Faiz Ahmed Faiz* are on everyone's lips and in every political communique. Similarly, the crisis manifests as individual struggles writ large - the travails of Justices Munir Malik and Iftikhar Chaudhry or Aitzaz Ahsan and Asma Jahangir are the lightening rods for immense energy and focus among the protestors.

What is remarkable about those two letters - even as they are individual stories - is that they highlight the pervasive oppression by the Pakistani state in every aspect of society. The people are not fighting solely for electoral politics or freedoms for one or two ... it is this Leviathan they want to eliminate.

Also, not to be missed ... President Pervez Musharraf unveils his softer side:

Q. Will the judges be restored to their prior positions?

A. No, not at all. What judges? Why should they be restored? New judges are there. They will never be restored.

Q. People in the West will have a hard time understanding that.

A. Let them not understand. They should come to Pakistan and understand Pakistan.

Q. Then why are you now clamping down on the media? You seem far more angry now than ever before.

A. I think you are right. [Laughs] Why don't you understand? Am I a madman? Have I suddenly changed? Am I a Dr. Jekyll and Mr. Hyde?

Q. And you feel you could work with her?

A. I think so. I am not such an unpleasant person.

Q. Some say that you want the prime minister to come from your own party.

A. We are going to have fair and transparent elections.

Q. Is that really true?

A. Why do you think it is untrue?

"Am I a madman? Have I suddenly changed? Am I a Dr. Jekyll and Mr. Hyde?" Priceless! Those are three different separate questions for us to ponder.