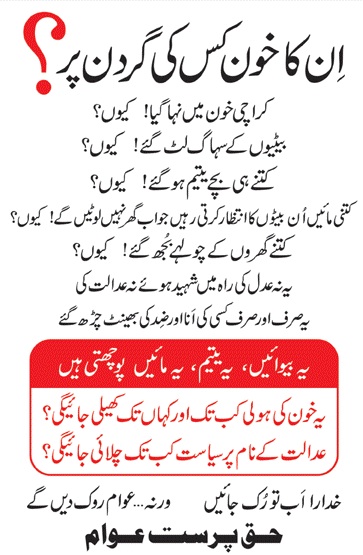 "Karachi is smelling quite similar to early 90s." My dear friend, who lives and works in Karachi, responded thusly to my query about his safety. For everyone's sake, I pray not.

I saw this ad in Daily Jang the day after the massacres. I don't know who sponsored it - but the language makes me think it is not someone very sympathetic to the CJ. But, one could easily ask the same questions from The General.

The news is bad and it gets worse. Another 22 were killed in another suicide attack in Peshawar.

I wanted to write a longer piece but I am, literally, too depressed.

can you translate the ad, please?

something like: Their Blood is on Whose Neck? [colloquially, that would be "Hands"] Karachi was drenched in blood, Why? Daughters were robbed of their husbands, Why? However many children were orphaned, Why? How many Mothers will await those sons who will never return, Why? How many flames were extinguisghed in kitchens? Why? These were martyrs neither for Justice nor the Court They were sacrificed only for someone's ego, These widows, these orphans and these mothers ask How long will Politics be played for the sake of Justice? For the sake of God, please stop .... Or the People will Stop You. Signed: Truth Seeking People.

Want to see the irony in that ad... Truth seeking people (Haq parast awam) is actually MQM. They call themself Haq Parast Obviusly shame is yet another basic element of humanity that they are devoid of.