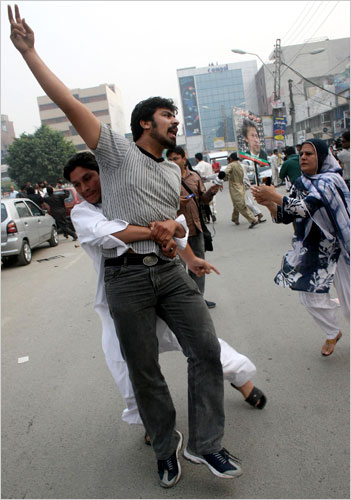 Several senior administration officials said that with each day that passed, more administration officials were coming around to the belief that General Musharraf's days in power were numbered and that the United States should begin considering contingency plans, including reaching out to Pakistan's generals. NYT, U.S. Is Looking Past Musharraf in Case He Falls, Nov 15, 2007.

I have argued, for a while and to earlier criticisms, that the American support for Pervez Musharraf is wrong-headed - not just on ideological terms (our self-proclaimed call for Freedom's March Across the Muslim World) but also in strategic terms (our efforts to eliminate al-Qaeda and counter extremist ideologies in Western Asia).

The support for Musharraf on ideological terms seems to me to be a rather indefensible position but people still manage to do it, including the White House. The defense hinges on the "Not Yet Thesis" - freedom is good, dictators are bad, but Pakistan is not yet ready for freedom and must depend on dictators to build civic institutions, train the electorate and, in future, bring democracy. (Which is akin to waiting for the fox to install security in the henhouse. Makes perfect sense.)

We maintain that the man we know - a benevolent dictator named Pervez Musharraf - is better than the multitudes we do not know. We fear the multitudes on two fronts. One is that we conceive of them as masses without politics - forever hostage to gross religious and ideological provocations. Masses which do not constitute a body politic or act with an interest in self-preservation or self-growth. Faced with that absence of reason, we are forced to support native royals to do the job (from Egypt to Pakistan). We justify it by stressing that we may not like these dictators but we know that if we did not have them, the masses would instantly betray us to the very forces of extremism that we seek to destroy. This ignores, of course, actual historical and political realities in those countries. This disengagement means that our knowledge remains sketchy, undifferentiated and reliant on gross generalizations of the "masses". It intimately links us to the gross abuses of power that our dictators exert - with means provided by us. Second is that these masses are Muslim. This fear grounded in our history can, at best, be understood as the fear of the "Other" and, at worst, as the Lewis/Huntington model of civilizational clash. Either case, it is borne out of our inherent belief in "difference". They are not like us. They do not possess reason, etc. (Ask Dick Cheney why nuclear deterrence worked with the Soviets but cannot work with Iranians.)

The strategic case is just as nonsensical. The fight against extremism is a fight that ordinary Pakistani citizens have much more at stake in. It is their immediate freedoms that are threatened by the Talibanization of their society. It is their frustrations that are being capitalized upon by the Islamists. The historical, political and social trends have always clearly shown that the Pakistani publics predominantly prefer a moderate and open society. If we really are serious, we need to empower the Pakistani publics and not facilitate their oppression.

The conventional wisdom, however, remains against such a reading. Take Fareed Zakaria's Pakistan's Pinstripe Revolution in Newsweek - where he feels that benevolent dictators should be cut some slack and that Pakistan needs that helping hand. But Zakaria seems to misread Pakistan's judicial and political history and, at the very least, Musharraf's entire public persona. He argues that the judicial problems of Musharraf begin in 1999 when he asked - for the first time - for the Supreme Court justices to resign and re-take their oaths of allegiance. What he fails to point out is that Musharraf was simply following in the footsteps of every dictatorial regime in Pakistan - all of whom asked the judiciary to re-take their oaths - and that the judiciary acquiesced in every single case. The 'new-ness' of Pakistan's recent judicial crisis is that only recently did they decide not to rubber stamp the military regime. The causes for this break are diverse and I have outlined them elsewhere.

Zakaria makes further dubious claims: "He turned the country's strategic orientation away from the Taliban, revived the economy with real reforms, empowered women and spoke out against the pernicious influence of Islamic extremism." He turned the country away from the Taliban insofar as he didn't. The Taliban continue to find solace and refuge in the northwestern province and his relationship with Karzai's regime have never gone below the boiling point. He revived the economy insofar as the US has poured 10 billion dollars into the Pakistani military-industrial complex since 2001. This influx of money has created the biggest land and industry holding entity in Pakistan's history - the Pakistan Army. Please look at Ayesha Siddiqa's Military, Inc. for a solid understanding of that immediate history. Empowered women insofar as he allowed the Hisba Bill to pass in NWFP and it was only the Supreme Court that stepped in to stop it. And finally, on that Islamic extremism front. I do not really think that publishing an editorial in the Washington Post about "Enlightened Moderation" qualifies as doing much if one constantly cuts deals with Islamist militants in NWFP, Swat, Quetta and Islamist parties in Islamabad. 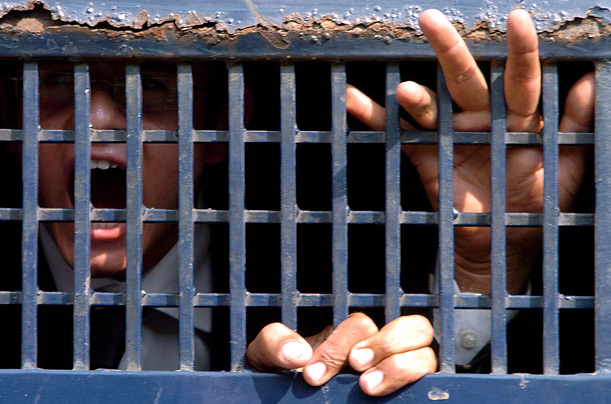 Another recent piece, Lee Smith's Mixed Messages, in Slate, is even worse. It argues not only that we should support Musharraf but that that is the only way to combat extremism. Leaving aside the Orientalist reading of history, Smith appears horribly misinformed about Pakistan. He claims, for example, that, "The Pakistani military, as is the case with most armed forces in the Muslim world, is the citadel of the country's modernity, its most significant secular institution and protector not only of the modern nation state but the idea of the nation state itself." I don't really know what being a citadel of modernity actually means, but the Pakistan Army has undergone a rigorous program of Islamization and faith-based militancy since Zia ul Haq in 1979. Whatever lingering secularism is there belongs to the older cadre of senior staff that came into the military pre-80s. Folks like Musharraf. The main troop strength comes from rural Punjab, Baluchistan and the Northwestern province, and no one is reading Karl Marx or Nietzsche, I assure you.

Therein lies the heart of our problems with making an ideological or strategic case for aligning with dictators. We trust and privilege the narratives they provide us. Musharraf, like Zia ul Haq before him, has successfully explained Pakistan and the world to us. The forces of darkness hover at the border and only the rightfully guided leader can shepherd the nation. For Musharraf the bugaboo is extremism, for Zia ul Haq it was Communism. In both cases, we pumped amazing amounts of liquid cash and military hardware into Pakistan and waited for the eventual victory. Somehow we still act surprised when victory doesn't materialize.

The good news is that, as I watch the Democratic Presidential debate, Biden, Obama, Edwards and Richardson are all agreeing that we need democracy in Pakistan more than we need to prop up Musharraf's dictatorship. The tide is shifting. The people of Pakistan may yet escape the not yet.

Hey, I thought you were going to spare that poor sad sack Zakaria. Zakaria and Smith are already in a tiny minority that is cozy to Musharraf. The conversation is rapidly turning towards Benazir is the Team America savior. I am blogging about shift and proposing strategies on how to steer the conversation right past Benazir and towards the rule of law.

Thank you for this and all the earlier round-ups.

Jawad: You are right, esp. after you did a good job fisking Zakaria. But the post demanded that I provide some counter arguments. On BB, more coming. Aswin: Thanks, mate.

Is there some means that the South Asianist (not sure if that's a word, but I'm coining it) academic community could use to get word of the actual condition of Pakistan out at least to the media if not the U.S. government?

what is especially depressing is the number of pakistanis who have come to buy this whole "not yet" ready/in the waiting room of democracy argument. the years of indoctrination that we have undergone (at the hands of the military) that have made us actually believe that we are lacking/inadequate in some way that other nations are not. so while "outside" readings of how we are not ready for freedom and must put our fate in the hands of generals who will "teach" it to us is annoying and enraging, the fact that so many of my fellow (young) pakistanis firmly believe the same thing is truly disheartening... of course there is much to say about the segment of (older) pakistanis that constitute this viewpoint but when its preached by the relatively young ...

Hi, I know this is not related to this post but just wanted to share it with everyone. Some MPs in UK are rallying for the release of all political prisoners in Pakistan. University of Bradford has sent a letter to UK's Gordon Brown asking for the government to put pressure for release of Imran Khan and others thrown into jail by the regime, restoration of judiciary etc. Whatever your political alliances, please sign this petition to show support so that there is some sort of pressure put on Mush. http://www.brad.ac.uk/chancellor/freeimran/index.php Let's fight for Pakistan!

[...] president Pervez Musharraf, and its refusal, at the time to trust Pakistan with democracy. In an entry written in 2007, he described Pakistan as the “the not yet nation” - a country for which democracy might be [...]

Trusting the masses: US tiptoes into democracy in Pakistan | Pakistan: Now or Never? | October 20, 2011

[...] president Pervez Musharraf, and its refusal, at the time to trust Pakistan with democracy. In an entry written in 2007, he described Pakistan as the “the not yet nation” - a country for which democracy [...]

[...] the people's movement (popularly referred to as the Lawyer's Movement) to oust General Pervez Musharraf in 2007, I started taking issue with the Pakistan Army's heavy [...]

[...] lays out the history of the America's violent entanglements with Pakistan through the years; the antidemocratic agenda it pushed (in Pakistan and many other Muslim-majority countries) by supporting military rule, so [...]