An event in Chicago. Friday, July 10th @ 6 at Mess Hall. Blurb below. Hope folks can make it. 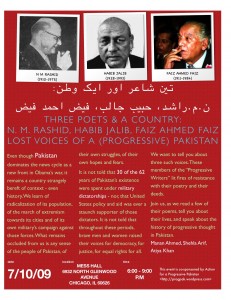 Even though Pakistan dominates the news cycle as a new front in Obama's war, it remains a country strangely bereft of context - even history. We learn of radicalization of its population, of the march of extremism towards its cities and of its own military's campaign against those forces. What remains occluded from us is any sense of the people of Pakistan, of their own struggles, of their own hopes and fears.

It is not told that 30 of the 62 years of Pakistan's existence have been spend under military dictatorships - nor, that United States policy and aid was ever a staunch supporter of those dictators. It is not told that throughout these periods, brave men and women raised their voices for democracy, for justice, for equal rights for all.

We want to tell you about three such voices. These members of the “Progressive Writers” lit fires of resistance with their poetry and their deeds.

Join us, as we read a few of their poems, tell you about their lives, and speak about the history of progressive thought in Pakistan. Manan Ahmed, Atiya Khan, Shehla Arif

It is heartening to note that a notable effort is being made by pakistani civil society to tell others about these great poets and individuals. But it is oversimplification of the complex history of Pakistan, to blame USA for all it's military dictatorships (under assumption that dictators did all the harm). The actions of it's non military leaders from Z.A.Bhutto to Asif Zardari were no better.