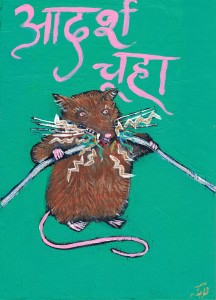 , out from Duke University Press, is up on Bookslut. Here's a sneak peak:

You discuss a Hindi short story in your book, in which the three kilometers the young heroine must walk to college each day is described in three phases, and represents a kind of microcosm of the trials and tribulations of making one's way through Patna. If you were to choose a stretch of road in Patna to describe in that manner, what stretch would you choose and why?

Oh, that passage! I wish I had written it myself! I'd gladly exchange a whole book for three paragraphs of Arun Prakash. Frankly, I think his brief description of the three stages of his protagonist's journey from her home to her college is better than many sociological treatises on cities.

Your question makes me think of the street near my house, Boring Road. I used to catch my school bus there. The house of my history teacher, a man who drank himself to death, is now a bank. Across from that building is a huge structure that also houses a new coaching institute. Next door is the Hindi paper, Prabhat Khabar. Down the road is the house of the great historian Ram Sharan Sharma, and closer than that is the home of another great historian, Surendra Gopal. This was where a great communist leader lived till his death, and a communist poet has a small apartment there. The shabby stalls selling chicken and fish are still there, and a Sudha milk-booth. Right in the middle of the chauraha is the temple, which appears bigger with each passing visit. When I was a schoolboy, it was just a shrine, coming up to my knees. The main change is the explosion of commerce on this street. New stores with their air-conditioned galleries and security guards, jewelry merchants, sweet and gift shops, even a spa. What I'd like to do is write three paragraphs naming each store and take note of how recent they were. My theory is simply that the dates of their establishment would prove a simple fact to us: in place of the old culture, including the prized place of the intelligentsia, what we have now is the sudden influx of black money. Unaccounted-for cash that proves wrong all dire observations about economic downturn. Yes, there might be no electric supply, an absence of wide roads, a general sense of pollution, even violence in the air... but in the secret lives of the people, there is industry and ambition. Too bad that it can't always be distinguished from criminality and greed.