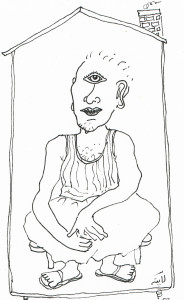 (Recently, I was asked to write something about translation for The Byword, a new journal of arts, literature and culture based in New Delhi. I wrote this essay, which appears in the latest edition, available only in hard copy for the moment. The illustration is pen and ink, by me. Cross-posted from shreedaisy.tumblr.com)

There are many ways in which translation is unfulfilling. It's a solitary pursuit, and one for which the translator receives scant praise. If the translation is really good, the praise goes to the author of the original text. If it's unsuccessful, the translator may be blamed, but readers might just assume the original author is not worth reading. The translator is invisible even in her badness. On top of invisibility, financial compensation is meager, translations are not widely read in English, and often one's name doesn't even appear anywhere on the cover of the book. Oh yes, and it takes a very long time, and one is never satisfied with the final outcome.

So why translate? Even though it's not technically a compulsion for me, I can't really stop myself from being a translator. When I read something in a language other than English, I constantly imagine how the writing would be rendered in English, word-by-word, sentence by sentence. Lately I've been reading a lot of French literature for example, something I haven't done since I was a teenager. I imagine myself translating everything I read. I have to constantly remind myself as I read that I'm not a translator of French, and that there are many other translators more capable of translating from French into English than me. But then, of course, there are many people who would be more capable of translating from Hindi into English than me, but they don't choose to do it, and I do.

The (non) compulsion of translation for me is rooted in an orientation toward linguistic detail so extreme that I am liable to have numerous thoughts on every single word in a sentence even when I'm just reading for pleasure. When an editor questions my word choice in a translation, I am likely to respond with a paragraph or two defending my choice. It's a headache for them, but most likely they will breeze past it, make a determination and move on. But I won't. Years later, I'm still thinking about that particular word and what my editor said about it.

For example: the Hindi word kÄnÄâ€”which is usually translated into English as 'one-eyed man'. I remember learning this word in introductory Hindi, not because it was a terribly important basic vocabulary item, but because it's a useful tool for language teachers giving out dictation exercises. The distinction between kÄnÄ and khÄnÄ is a small puff of breath, or what linguists call 'aspiration.' The 'k' in 'one-eyed man' is not aspirated; the 'kh' in food, or khÄnÄ, is. For non-Indian English speakers the puff of breath is not the problem; it's the absence of the puff that's extremely difficult to hear, and even harder to pronounce. The classic dictation exercise is to read out the following two sentences and ask the students to write them down on a piece of paper: ghar máº½ kÄnÄ hai and ghar máº½ khÄnÄ hai. Students who have no grasp of Indic phonetics are flummoxed by the exercise and hear no distinction at all. The teacher then reveals that one means 'there is a one-eyed man in the house' and the other means 'there is food in the house.' The room dissolves in laughter, and the lesson is learned.

Or is it? After years of using this exercise as a teacher myself, I began to realize that what kÄnÄ meant to me as a non-South Asian English speaker was something akin to a Cyclops. A one-eyed man was a man with only one eye, and only one eye socket. As I began to read more deeply into Hindi literature, I realized that of course a kÄnÄ was not a mythical sort of creature with a single eye above his nose, but instead, an individual with only one good, or functioning eye, someone like Mullah Omar, the former leader of the Taliban. To speakers of English in South Asia, this fact is already known, and assumed, when hearing the phrase 'one-eyed man,' because the concept exists in many Subcontinental languages. But in American and British English, such a state is described as 'blind in one eye,' and other such phrases.

Interestingly, many other languages contain a term equivalent to kÄnÄ, though what the valence of each term is, I am not sure. In Spanish, there is the popular saying 'en la tierra de los ciegos, el tuerto es rey'â€”'in the land of the blind, the one-eyed man is king.' This, in turn, is derived from the Latin saying 'in regione caecorum rex est luscus,' which means, literally, 'in the region of the blind, the king is a one-eyed man.' More research into luscus indicates that it is defined in Latin as 'one-eyed man,' but also as 'with one eye closed; half-blind.' The same is true for the Spanish tuerto.

In an online forum devoted to translating proverbs such as this, a commenter asks, in a discussion of the Spanish version, “Does anyone else find it really weird how Spanish has a word for 'one eyed person'. Surely this word would be almost never be used.” This random online remark echoes my initial reaction to what I perceived as the absurdity of the sentence ghar máº½ kÄnÄ hai when I first started to learn Hindi. What made me remember the example, and learn how to de-aspirate the 'k,' was the preposterous notion of a Cyclops-like figure sitting in a house. What was he doing there? Was this example drawn from mythology or a fairy tale? It never occurred to me until many years later that the correct contemporary American English translation would be, 'There is a person with an ocular disability in the house.'

Despite decades of thought on the subject of one-eyed men, I was never confronted with the need to render the word kÄnÄ in English translation until recently. That opportunity arrived in the form of the first chapter of Premchand's famous novel Godan, which my editor at Penguin asked me to re-translate, as the two previous versions were considered poor, or, as he put it more kindly, 'dated.' I decided to try out translating the opening passages of the book, where I found I would at long last be afforded the occasion to translate the word kÄnÄ. The sentence in question was this, “kÄnÄ kahne se kÄne ko jo dukh hotÄ hai, voh kyÄ do ÄnkhonvÄle ÄdmÄ« ko ho saktÄ hai?” In the 1956 translation by Jai Ratan and P. Lal, this sentence is translated as follows: “Can a two-eyed ever feel the hurt that a one-eyed feels at the taunt of being called a one-eyed man?”

Besides being an inelegant rendering of a pithy Hindi proverb, this translation embraces the notion of the one-eyed man, and goes one step further, creating a new category in English, the 'two-eyed'. I then turned to Gordon Roadarmel's 1968 translation to see what an American English speaker would do with kÄnÄ. Roadarmel's rendering breaks the sentence up in an attempt to capture the jauntiness of the original phrasing: “The taunt 'Hey, one-eye!' hurts a one-eyed man more than a two-eyed one.” Roadarmel does not attempt to engage with the notion of one-eyed-ness in English, but does artfully try to instruct the non-Indian reader in the notion that in Hindi there exists a class of taunts for the condition. In Ratan and Lal's translation, this idea is left opaque.

In my own first attempt, I struggled mightily to find a phrase which captured the actual condition that a kÄnÄ suffers from. My version was even less elegant: “If you taunt a man with two good eyes and call him one-eyed, will he feel the same sorrow as a man with only one good eye?” To this rendering, my editor rightly wrote that there might be a crisper way of expressing this, perhaps by simply calling him a one-eyed man? To this I responded with a lengthy treatise on the nuances of kÄnÄ and the state of one-eyed-ness, no doubt eliciting in him some qualms as to my own fitness for the task of creating a more up-to-date version of Godan.

I'm still working on this. I've only just begun the translation of the book, and I'm confident I'll have dozens more versions of this one sentence. A man with only one good eye is much more wounded by taunts of his condition than a man with two eyes would ever be. Because this is the nature of translation. If you're blind in one eye, won't you feel more hurt by being called 'the one-eyed guy' than if you have two good eyes? A translation is just never finished. If people shout 'Hey, one-eye!' after a man with two good eyes, will he feel half the pain that he would if he were half-blind? Even when you see your work in print. He who is blind in one eye feels keenly hurt by taunts of his condition; not so the man with two good eyes. It's never perfect. He who is half blind feels the greater injury from taunts of blindness than the man with perfect vision. There's always some way to improve it. Taunts like, 'What's the matter, lost an eye?' hurt the half-blind man more than the one with perfect vision. And it's always possible I'll change my mind about one-eyed men and stop thinking of them as Cyclopses. The half-blind man is pained by taunts of blindness; not so the man with two good eyes. But probably not.

What about "To be called 'one-eyed' only really hurts if it's true"?