(A version of this review essay ran in The Friday Times, Vol. XXIII, No. 41)

In May 1962, when the first groups of America's newly established Peace Corps were flying out to various “underdeveloped” countries to help them along the road of “progress”, a twenty-eight years old woman set off in a Greek freighter from New York, to a self-imposed exile in one of those same countries, Pakistan. She traveled under the name Margaret (Peggy) Marcus that her parentsâ€”racially Jewish, politically Zionist, religiously members of the then quite the fashion Society for Ethical Cultureâ€”had given her, but to herself she was Maryam Jameelah (the Beautiful Mariam). Having only recently converted to Islam after a long struggle with her parents and her milieu, she was traveling to Pakistan not to join hands with her compatriots in the Corps but to find shelter from her painful and troubled past in a well-to-do suburb of New York, and to gain a new, purposeful and happy life at the home of the founder of Jama'at Islami, Maulana Abul Ala Maududi. She possibly felt she had found in the Maulana the understanding father she needed, while the Maulana might have taken comfort in believing that she would be the ideal person to expose for the benefit of the Pakistani youth the spiritual hollowness of the West and its notions of Modernity and Progress. 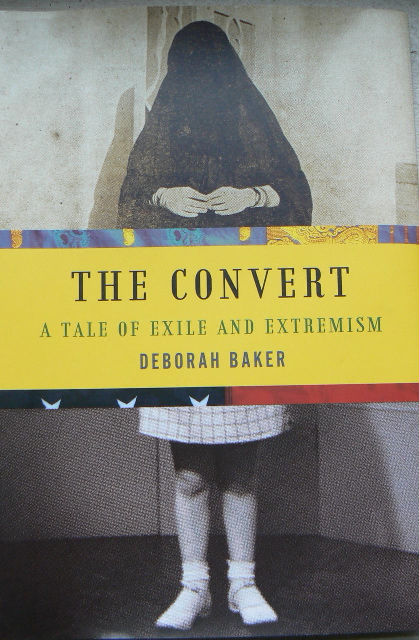 Jameelah had already written strong denunciations of her inherited culture, and of the U.S.-aided Israeli oppression of the Palestinians. Even at the age of eleven, she later noted, she had felt herself drawn to Islam and the Arabs; she had also convinced herself that any Jewish desire to seek a home in Palestine was a desire to recreate the golden days of Arab-Muslim-Jewish fraternization and creativity in Andalusia. Consequently, she was horrified to discover in 1948 that her almost non-Jewish, Ethical Culture-liberal, comfortably suburban parents could be openly racist with reference to the Arabsâ€”particularly, the Palestinian Arabsâ€”and could enthusiastically contribute to fund Zionist ambitions in Israel. I must add that like almost all Americans then and now, Peggy Marcus too identified Palestine only with its Muslim population, when in fact, in 1948, there were at least 140,000 Christian Arabs in the British Mandate area, and even now there are about 200,000 Christians in the West Bank and Gaza (9% of the population), as compared to the 150,000 in Israel (2% of the population). Further, she never showed, even in her later polemics, any awareness of those Jews within Israel and the United States who steadfastly opposed aggressive Zionism and demanded a just and equitable resolution. Likewise, the fate of the Palestinians handed over by the British to the son of their Arab ally against the Turks was of no concern to herâ€”as has been the case with other Muslim commentators like her. 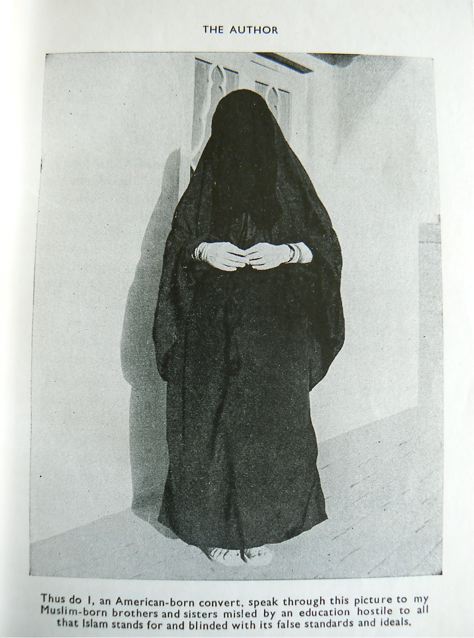 Jameelah was welcomed into the Maududi household at Lahore when she reached there in July 1962, but soon problems arose. In quick succession the Maulana packed her off to another family outside Lahore, then had her confined to the lunatic asylum at Lahore for a few monthsâ€”her parents in Mamaroneck, N.Y., had done the same to her a few years earlierâ€”and finally got her married to a Pakistani man who already had a wife and children. Through all this her ideological embrace of the Jama'at remained unbroken. Eventually her husband, Mohammad Yusuf Khan, became her publisher, and she began writing articles and small books on the themes that were dear to her and the Jama'at. These trenchant writings first appeared in English, and then in Urdu, Arabic, and other languages. Her name became widely known as an ardent Islamist. Anyone interested in Islam in South Asia in the Sixties and Seventies knew who Maryam Jameelah was. She became to countless Muslims a living proof of Islam's supremacy as religion: a well-educated Jewish woman who left the comforts of American suburbia to live out a life in Islam in Pakistan, voluntarily going into strict purdah and marrying a married manâ€”all for the sake of her chosen faith, and in obedience to the wishes of her self-appointed “father-in-Islam.”

Jameelah's presentation of herself to Pakistan and Muslim intelligentsia in 1962 was rather dramatic for the time. Her first book, a collection of previously published essays, was brought out by a prestigious publisher of Lahore, Sh. Muhammad Ashraf, which had also been publishing Iqbal's The Reconstruction of Religious thought in Islam for many years. The book's title, Islam Versus the West, seemed to suggest an aggressive reversal of the apologetic posture implied in the expression “The West Against Islam,” used in similar polemics in Pakistan and India. Hers was an assertive posture, that of an Islam launching a preemptive attack. And a brief text on the cover indicated that the fight was going to be on two fronts: “Read how Islam is far more seriously menaced from within than from without.” The back cover carried a picture of the author, her face encircled by a chador but otherwise fully exposed, and a brief resume of her life, bravely including a mention of her two years in a mental hospital. It ended with this bold statement: “The author wishes to be able to use her talents and abilities to further the cause of Islam.” Her next book, Islam and Modernism (1965), published by her husband, was a collection of new essays exclusively condemning Muslim “modernists” scholars. And it contained a picture of the author in an all-covering burqaâ€”the exposed hands were encased in glovesâ€”that seemed to challenge the women of Pakistan to live up to the “truly” Islamic standards of modesty. Its caption made the intention clear: “Thus do I, an American-born convert, speak through this picture to my Muslim-born brothers and sisters misled by an education hostile to all that Islam stands for and blinded with its false standards and ideals.” While the introductory title in the first book was simply, “How I Became Interested in Islam,” the opening essay in the new book was titled: “Why I Embraced Islam.” Nothing was tentative now; henceforth there will be nothing but uncompromising conviction. 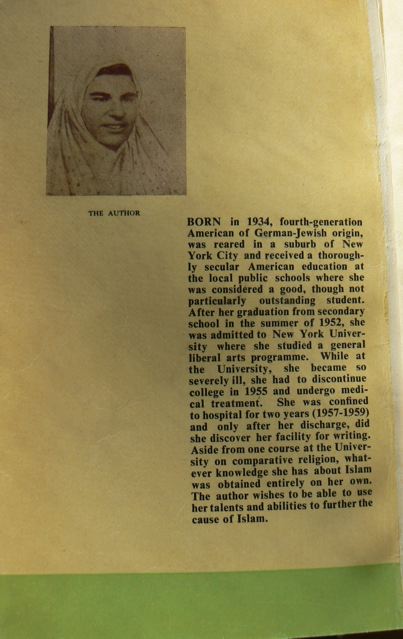 Needless to say there was a great deal more to the story, and a brilliantly presented account is now available in The Convert: A Tale of Exile and Extremism by Deborah Baker (Greywolf, 2011). For one, Jameelah had an eye on posterity all the time. Over the years she made several deposits at the New York Public Library, consisting of her writings, correspondenceâ€”some of it heavily revisedâ€”and paintings and sketches, where they were safe but also readily available to any curious reader. Baker stumbled upon the hoard by chance, and at an opportune moment when the Jama'at, Extremism, and Jihadâ€”not to mention Islam itselfâ€”had become hot button words within the American society. It was equally opportune for Jameelah that it was Baker who found her papers, and not some perfervid, jargon-struck academic. As an experienced writer, Baker rose to the occasion by deciding to tell Jameelah's story more or less as it unfolded for her, honestly sharing with us her frustration as contradictory detailsâ€”even deliberate deceptionsâ€”stumbled out. She has skillfully created a narrative that grabs our interest fast, and then compels us to read the book as avidly as one reads a good whodunit. Of course, in this case, it is not the question “Who?” but “Why?” that lies at the center. As expected, there is no single powerful answer. Nor does Baker ask the question so crudely. Placing before us any number of credible causes and explanations, ranging from the personal and familial to the global and ideological, she allows us to gain much from her insights while letting us come to our own conclusions. 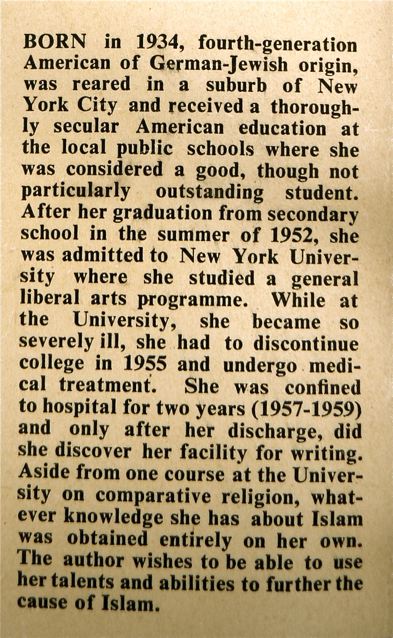 It is a wise and engaging book that should generate many useful discussions in these troubled times. Most importantly, her book might make many readers more aware of one terrible feature of today's discourse on terrorism. Presently it is as if a “terrorist” has only an ideology or religion that dictates his actions, while the rest of us could safely use family situation, peer pressure, mental or psychological issues and much more to explain our actions. Even the “Unibomber” had a psychological life, but not Major Nidal Hussain. In the latter's case, his “Muslim” name explains everything.

Baker's book was a finalist for the prestigious National Book Award. But it deserves much more attention than it has received so far. I have not heard her being interviewed on national radio and TV programs, and her book has not received much mention on the blogs that deal with Islam in South Asia. It is, however, a book that should be read by many, in particular by young Muslim men and women in the United States and South Asia. Not as a cautionary tale, but in order to obtain a more nuanced understanding of what they might be experiencing. Their present lives are filled with challenges that cannot be met with easily, and Baker's book should help them discover that easy answers usually come at a heavy cost.

My only quarrel with Baker is the word “Exile” in the subtitle of the book. Who exiled Jameelah? And if it was a self-imposed exile, why can't we simply call it migration? As I see it, Jameelah went to Lahore to find happiness, security, and fulfillment on her terms, just as one of the Maulana's sons later traveled to New Jersey seeking the same boons in the United States. The Maulana passed away in 1979, in a hospital in the United States. Some say his sudden collapse was caused by the insensitive and hurtful behavior of one of his acolytes who visited him in the hospital. His house in Lahore is now a disputed property between the party he created and the children he sired. As his precious library rots in sealed cabinets, his writings continue to make money for the Jama'at and the family. Jameelah continues to live in Lahore, no more a prolific writer but still working for the Jama'at to earn an income for her family. Her two sons live in the United States, but the two daughters seemingly live the same secluded married life as she does. Way back in 1949, the fifteen-year old Margaretâ€”her parents called her Peggyâ€”had fallen in love with the voice of Umm Kulthum and spent all her allowance on a stack of the great Egyptian singer's records. One can only hope that she allowed herselfâ€”or was allowed by her husbandâ€”to find some similar joy and comfort in the company of Farida Khanum and Abida Parween. The Maulana's daughters reportedly did.

I, being a lay man, don't understand why some one else writning my story is more important/credible than I writing my own.