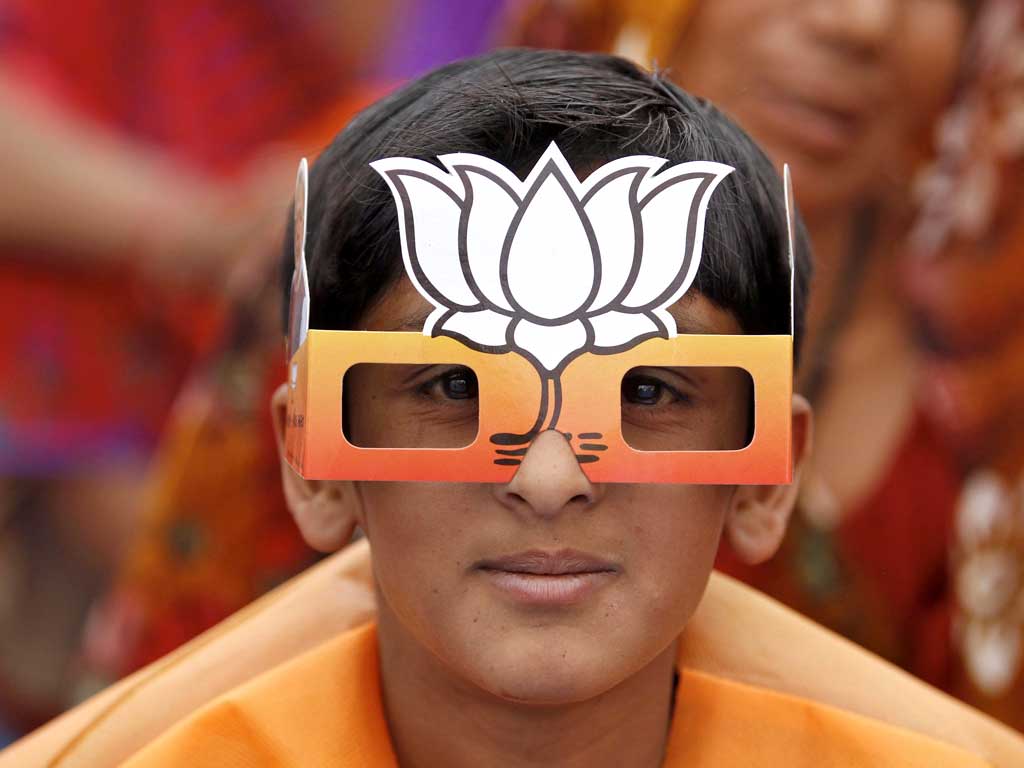 The savage violence in Badaun and Pune reveals an abiding moral ugliness at the heart of present-day elite Hindu society, argues Rohit Chopra

It is an ethical obscenity to even try to imagine what the parents of the Badaun girls or Mohsin Shaikh must be going through. The iron on the flesh is the iron on the flesh. We might know though, all of us, that the pain of those we love devastates more, burns fiercer, than the pain we ourselves experience. We might know, too, that there is no pain like the pain of a child. There are few things harder to watch, no knowledge worse to bear than witnessing a child suffering.

The images haunt. The parents of the Badaun girls falling at the feet of politicians. They are begging for justice for their murdered children. Mohsin Shaikh, the young Muslim man in his twenties, beaten to death by Hindu terrorists. He is smiling, slightly self-conscious. It is the kind of photograph the local photo studio in any Indian lane would proudly display on their walls.

Narendra Modi's silence and belated mumblings, attempting the garb of decency, speak only of his calculations. Let the Akhilesh Yadav-led government in UP and the Congress-NCP alliance in Maharashtra take the flak. He does not need to say anything to alienate caste Hindus, the key demographic that put him in power. But Modi's silence, as indeed the repugnant attitude of the leadership and state officials in UP, are symptomatic of a deeper malaise: the pervasive, relentlessly and thoroughly routinized, dehumanization of disenfranchised caste and religious minorities that enables and authorizes the kind of violence seen in India today against the most vulnerable sections of our society.

For all of my life, I have seen how elite Hindus have been, at best, indifferent to the forms of apartheid in our society and, at worst, its active and unapologetic perpetrators. The endless jokes about Scheduled Castes and Scheduled Tribes, Muslims, Anglo-Indians, and Christians in all the schools I attended. (The measure of an "okay" Muslim or Sikh being the ability to tolerate or even participate in this low-grade humor.) The demeaning terms for every single religious or caste minority group, which I do not need to repeat here. The blanket term for those who are poor or have less, "chote aadmi, chote log," small people. Of course, no such derogatory term exists for "upper"-caste Hindus.

The list goes on endlessly. Brahmanical Marxists who grew apoplectic at the thought of their sons and daughters marrying outside the caste fold. Middle-class Indian parents who wanted their children to attend "good" schools, uncontaminated by the so-called lower-classes and wrong kinds of minorities. The separate sets of cups, saucers, and plates for the domestic help. The servant elevators in the posh multi-storied buildings of Bombay from which newspaper columnists lectured us on the vagaries of Indian society. The exclusions from public spaces, housing societies, private sector jobs, and prestigious government posts.

The same elite Hindus, though, are thoroughly and genuinely convinced that they have nary a prejudiced bone in their body. This violent, demeaning language, they insist, is simply a relic from another time, of a kind of thinking that they have transcended. J.M. Coetzee once observed that in post-apartheid South Africa, it was difficult to find a white South African who had ever expressed a truly racist sentiment. So it goes with elite Hindus. The larger narratives of national progress and development so dear to generation after generation of Indians, leaders and ordinary citizens alike, have served the convenient purpose of furthering this illusion, of hiding its illusory nature from itself.

Elite Hindus demand that Dalits, Muslims, and religious minorities should overcome identity politics, they should simply identify as Indian. It is a demand they never make of themselves. Quite simply because they don't need to. For from the moment of independence onward, the normative idea of the Indian has been primarily coded and routinely affirmed as Hindu, sitting uneasily with the genuine, if troubled and inconsistent, commitment to Indian secularism. And, as Amba Azaad (@AmbaAzaad) recently argued on Twitter, elite Hindus refuse to provincialize themselves by adopting the descriptive categories that minorities, such as Dalits, might employ for them. Political, sociological, and theoretical illumination always proceeds top-down, never in the other direction. That holds as much for those professionally writing about subalterns as for those denigrating them.

Indifference is predicated on a somewhat different rationale: the idea that elite Indian existence (significantly but not entirely corresponding with elite Hindu existence) is inoculated from the kinds of things that happened to people living, literally and figuratively, in backward, unenlightened spaces and states of being, whether in city slums or in the heart of rural India. Collectively, these are people in a primitive state of being, which explains the barbarism and savagery rife among them. Pity for victims and anger at perpetrators from the lower depths of society shares the same ground. And so, we protest against the Mandal Commission which threatens to reduce the number of college seats available to "meritocratic Indians" but not against Badaun or Pune. Or 1984. Or 1992. Or 2002. The one exception in recent memory is the Delhi 2013 protests against the sexual assault and murder of a 23-year old Indian woman, spurred in part by the brutally public and brazen nature of the violence which shattered the illusion that savagery in India existed elsewhere. The genuine mass protests in Delhi led by anti-corruption crusader Arvind Kejriwal ultimately failed to have any enduring transformative effects arguably because of Kejriwal's inability to see beyond caste, class, and soft Hindu nationalist biases.

Of the many soul-searching articles in Indian media, none was more chilling than Nishita Jha's essay in Scroll about "the culture of impunity in UP that allows young men in UP to commit sexual assault without fear of punishment." One condition of possibility, among others, for that culture of impunity in UP has been the capture of the state machinery by a particular caste group, the Yadavs, guaranteeing them de facto immunity for any violations of the law they might commit. (Time will tell whether those arrested for the Badaun sexual assaults and murder will be convicted).

It is worth querying though how the templates for that culture of impunity and the practice of particular groups capturing the state in India have been forged. Pranab Bardhan's seminal work, The Political Economy of Development in India, offers the best explanation. In an inversion of the basic Marxist proposition that the state reflects the interest of the privileged, ruling class, Bardhan argues that the Indian state through fostering patterns of accumulation has created three groups that disproportionately benefit from its practices: bureaucratic elites, urban elites, and rural elites. These groups, one can reasonably surmise, overlap significantly, if not completely, with elite Hindu groups. The brilliance of Bardhan's analysis allows us to understand the practice of Indian political and social life in terms of an Indian political modernity rather than as a reflection of a lazily theorized ahistorical feudalism or colonized mindset.

It is not difficult to trace in the behavior of these three categories of elites the roots of the culture of impunity that we now see commonly expressed by all Indian groups in the worst kinds of expressions of collective identity politics. Living in the enlightened, modern cities of Bombay, Delhi, Calcutta, and Madras, I saw, read about, and learned of countless instances of the children of politicians, ministers, IAS officers, filmstars, judges, lawyers, industrialists, leaders of religious sects, and, in general, the wealthy and powerful assault, threaten, harass, drunkenly run over, stalk and abuse Indian citizens who just happened to be less powerful, wealthy, and influential than them. No doubt, their parents enjoyed the same sense of being above the law, of being a law unto themselves, even if they did not express it in such violent terms.

In the Cuffe Parade neighborhood in which I lived for the better part of a decade, there was the relative of a police commissioner who mercilessly thrashed the owner of a cigarette shop because he dared suggest that he could not open the shop at midnight to take out just a pack of cigarettes. There was the violent relative of an underworld don who threatened all and sundry with dire consequences at any imagined insult. There was the businessman who paid an inspector in the local police station â‚¹ 10,000 to beat up a group of young men from the slum who made some comments about him. In the hostel at Delhi Public School Mathura Road in which I lived for two years, I met many students from such immensely privileged backgrounds from different parts of South Asia, Assam to Haryana, Bhutan and Nepal, who routinely used and spoke of using violence as if it were the most natural, obvious means of addressing every issue and resolving every problem in life. Even discounting the bravado that is the want of adolescent males, the stories they mentioned and sentiments they expressed were horrifying. Again, I do not need to retell them here.

Barbarians, I learned, don't just speak in cow-belt accents, they also speak in the Oxbridge-inflected haw haw tones so beloved of Stephanians and other elite Indians.

Over the last two years, a range of Indian thinkers have grappled with the problem of Indian violence, attempting to understand and explain it, if refraining from prescriptions for its cure, probably because of a sense of the intractable nature of the problem. There is the Ashis Nandy approach, generously described by Dipesh Chakrabarty as "critical traditionalism," of modernity as the source of violence, which nevertheless seems to inadequately address the problem of the violence sanctioned by tradition against women and minorities. There is the Amartya Sen approach, which mobilizes comparative statistical data to argue that violence against women is not necessarily more widespread in India than in developed Western countries (even accounting for under-reporting of assaults). There is the Ramachandra Guha approach anchored in the gradual unfolding of liberal reason in the "most interesting" and "exasperating" country in the world, pointing to progress while acknowledging the road ahead. There is a view expressed by several others that the Indian state and society are at a moment of crisis. Others, more nationalistic, bristle with indignation at unwelcome foreign attention to violence against women in India.

None of these perspectives--and I do not mean this as any kind of criticism--diminish the horror and ghastliness of the event of violence. Like prayer, they strike one as gestures of futility, even if they are gestures that are abjectly required. We know that justice too, though essential, does not make whole the loss we suffer. Not just injustice, but justice as well makes unfair demands of victims and survivors. That is its tragic inadequacy. To speak of reform in state and society, both necessary, is, again, to perhaps displace the issue. As trenchant a critic of the state as Gandhi realized that his hope that Hinduism would internally reform itself with respect to caste prejudice would not translate into reality. Legal equality in India has not translated into meaningful social equality. Perhaps both need to be accompanied by a separate project to confront the deeply-rooted, banal, and normalized practices of prejudice in everyday Indian life. The long-present and enduring moral ugliness in elite Hinduism would be a good place to start.