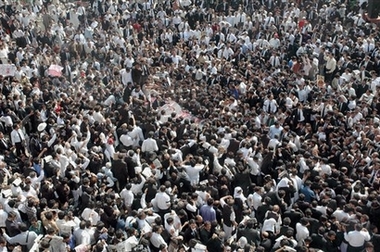 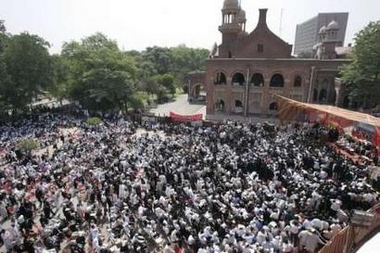 It had taken the chief justice 25 hours rather than the usual 4 to reach Lahore, which is considered Pakistan's cultural capital and an important political center.

He left Islamabad, the capital, at 7:30 a.m. on Saturday. But his caravan moved at a snail's pace. Hundreds of vehicles followed Mr. Chaudhry as he traveled through various cities of Punjab, the most populous province. Thousands of people stood by the road as the caravan passed by, making victory signs and shouting that General Musharraf should leave office.

Mr. Chaudhry's vehicle was showered with rose petals at every stop, and people pushed close to get a glimpse of him. - Throngs Attend Speech by Pakistan's Suspended Justice, NYT May 7, 2007.

Related: Lawless in Pakistan, No One Writes to the General.

and with Hum Dekhenge playing, too. This is heartening, much more so than the crowds gathered in Turkish city squares of late.