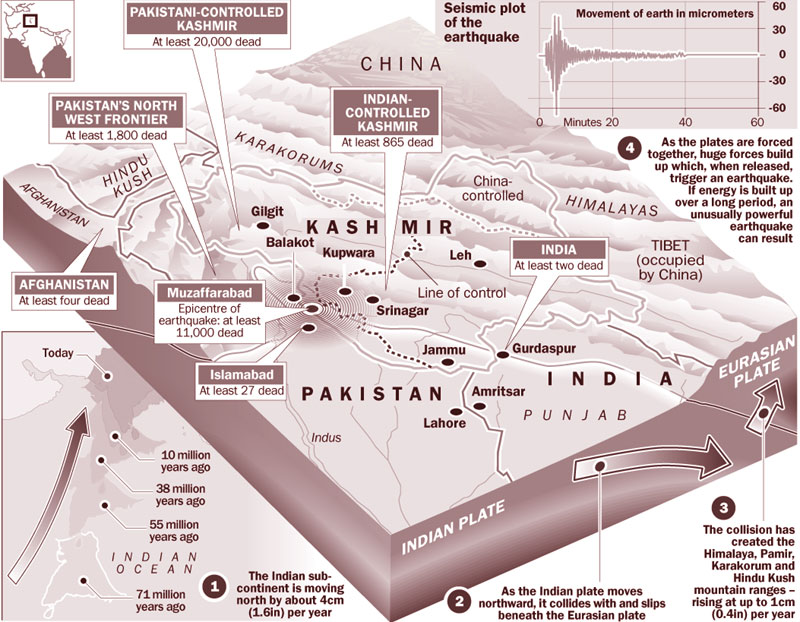 That shows you what happened.

Tariq Ali reports in the Guardian today from Lahore. He writes:

The death toll has been underestimated. Balakot, a small city which is the gateway to the beautiful Kaghan valley and heavily dependent on tourism, has been destroyed. Corpses litter the streets. According to yesterday's estimates, at least half of the city's population of 100,000 is now dead. A whole generation has been wiped out. Survivors were, till yesterday, without food or water because the roads were wrecked and helicopters were in short supply.

It is the same story in Muzaffarabad, in Pakistani-controlled Kashmir. Everything is wrecked. Here there have been anti-government protests and citizens have "looted" shops in search of food, just like in New Orleans. Further up on the Indo-Pak border, where a state of permanent tension is deliberately kept alive by both sides, 400 Pakistani soldiers sitting in trenches were crushed to death as the mountain wall protecting them crashed and buried them alive.

What of the relief effort? The government is doing its best, but it is not enough. The absence of a proper infrastructure, a dearth of reserve funds to deal with unexpected tragedies, and a total lack of preparedness despite annual disasters on a lesser scale, have cost innumerable lives. To watch General Musharraf on television bemoaning the shortage of helicopters was instructive. A few miles to the north of the disaster zone there is a large fleet of helicopters belonging to the western armies occupying parts of Afghanistan. Why could the US, German and British commanders not dispatch these to save lives? Is the war so fierce that they are needed every day? Three days after the earthquake, the US released eight helicopters from "war duty" to help transport food and water to isolated villages. Too little, too late.

Pakistan's army has been put into action, but armies are not suited to relief work. They are not trained to save lives, and reports yesterday that aid convoys are being attacked and seized by angry crowds long before they reach their destinations are an indication of the chaos.

Thanks for yet another helpful post on the earthquake and its aftermath. Your posts (forwarded to non-blogger friends, relatives, acquaintances) have been especially useful in getting people I know who live far from the "homeland" to focus on the situation.

Thanks Umair. I am doing the little that I can.

ty very much, am happy to get intouch of the news from ur page. Hope to be closer to Pakis as it's my late father's homeland