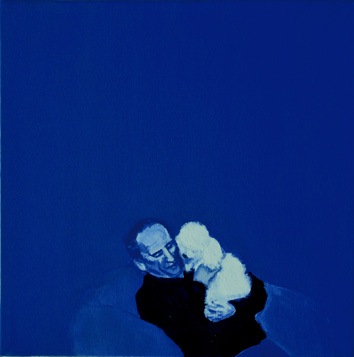 A manly public image can take a lot of work. Russian President Vladimir Putin's image is managed on many levels, including media depiction of his relationships with household pets. It has been widely reported that Putin is frequently photographed with an imposing black lab named Koni, whom he even invites to summits with foreign leaders, especially German Chancellor Angela Merkel, who is known to be afraid of dogs due to some childhood trauma. But Putin's heart does not lie with his muscular labrador as he would like us to believe. On the contrary, he harbors a secret love for a fluffy little poodle named Tosya. Tosya, whose fur is weekly trimmed 'in the lion's style' by a dog hairdresser, is officially supposed to be his wife, Lyudmila's pet, but this photo, uncovered by the resourceful Scottish Terrier and Dog News, tells a different story.

There's a line in the musical "Man of La Mancha" about "the sentimentality of truly brutal men."