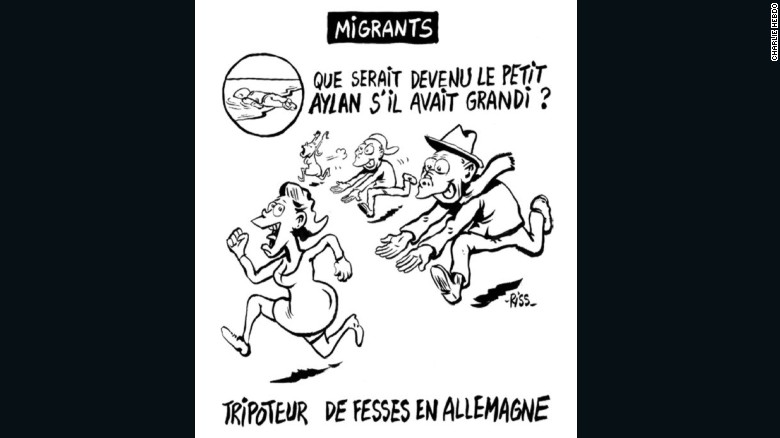 What would little Aylan have become if he had grown up? Riss's recent cartoon in Charlie Hebdo does not hesitate to prognosticate about the future of this child. And yet it was the termination of this future, pithily captured in the photograph of Aylan's lifeless, facedown body, washed up against the shore of a beach in Kos that haunted viewers for days. Days only, it seems. We learned his name, but never caught sight of his face. Named but faceless, Aylan could become an icon of the moral outrage of liberals. Lifeless but untarnished, his body foregrounded the tragedy of the loss of an innocent life but did not confront viewers with the forces responsible for it: the brutality of an authoritarian regime and its challenger, the manic power play orchestrated within global politics in alliance with and response to it, and the forced renunciation of a right to (meaningful) life that accompanies the refugee's endless traversing of unwelcoming borders.

Since its publication, the cartoon has received predictably mixed responses. Some, embodying the moral outrage I mention above, have decried it with disgust. Others have suggested that it mocks not refugees but Marine Le Pen's recent opinion piece about the alleged dangers that immigration poses to the achievements of Western feminism. Le Pen attributes the sexual assault of “hundreds” of women to immigration and, with a quick turn of phrase, criminalizes all migrants — suggesting that they hold Western laws, especially the rights of women, in contempt. She then declares her fear that women might once again be subject to barbarism. But Le Pen is not alone in positing this causality between immigration and sexual violence. News sources reporting the testimonies of the assaulted women were quick to invoke ethnicity — “North African or Arab in appearance”— in describing the perpetrators. My point here is not to challenge the ethnicity of the perpetrators, but rather to highlight the accounts' use of ethnicity as a marker of criminality; something that the cartoon does not do, even though its caption refers to the “groping” mentioned repeatedly in the accounts. Indeed, far from challenging the rabid imagination of those who fear immigration, the cartoon trivializes the enduring hardship of the refugee and even makes him culpable for it.

An inset on the top left recalls the photograph of Aylan and repeats its facelessness. But it also does away with the reference to scale that crucially helps the viewer identify the body in the photograph as that of a child. Furthermore, unlike the soft curves of a child's limbs that we see in the photograph, the stark lines of the inset denote an adult human body, albeit one in rigor mortis. Thus, even before we exit the inset, at the margin of which we find the accompanying caption enquiring about his future, we are confronted with Aylan in the conditional; that is, as an adult. The caption asks in the past conditional: Que serait devenu le petit Aylan s'il avait grandi [what would little Aylan have become if he had grown up]? Note that it asks what (que), not who (qui), Aylan would have become. Que here asks about Aylan's professional future Â­— Tripoteur de fesses (ass-groper) — and the accompanying image depicts his performing with gusto what the caption predicts. But the snout-nosed, bulging-eyed creature that we see in the image also invites a different reading of que. It makes one wonder if the caption asks what kind of animal little Aylan would have become in adulthood, and in so doing echoes the judgment of the likes of Le Pen, thereby leading defenders of the cartoon to assert that it is a caricature of the right-wing's imagination of refugees. Going above and beyond the right-wing's fear-mongering about rapist immigrants (note: not refugees), the cartoon shows snout-nosed creatures with outreached arms running in pursuit of an equine woman whose gaping mouth and bulging eyes suggest excitement about, rather than fear of, sexual violence. Riss's cartoon visualizes not the fear of sexual violence but of racial miscegenation. Without the twinned prejudices of racism and misogyny, the white men of Charlie Hebdo would need to save no one from no one.

My ire against Riss's cartoon is because of the way in which it deploys the past conditional; not, as liberals complain, for its toying with a future otherwise denied, or for its replacing the unseen face of a dead child with the caricature of a hybrid man-pig. Placed under the caption “migrants”, the sentence “Que seraitâ€¦” seizes, transforms, and trivializes a grammatical tense and mood that, with its inherent sense of contingency and uncertainty, textures the day-to-day life of the refugee and highlights the discrete temporality of refugee life. On each boat, in each van, on the margin of every border, at each camp, over each meal, at each farewell to a loved one, at each reunion, at every instance of clinging to and handing over a document of identity, at every reminder of the lost home, against the gaze of every unwelcoming stranger, the life of the refugee necessitates the perpetual incantation of “whatâ€¦ if...” against the unknown that lies ahead and the violence that is routinely expected within it. Furthermore, “Whatâ€¦ if...” spaces a painfully unbridgeable gap between refugee and migrant. Riss's cartoon may caricature the right-wing imagination, but its caption fails to grasp, and even conceals, that the future projected onto refugees is the very source of their conditional present. Here a productive dissonance between caption and image arises. Placed in the indefinite blank space of the cartoon, the phantom Aylan chases after the object of his desire. However, like the refugee, he goes nowhere.

The phantom Aylan, the cartoon tells us, is a tripoteur de fesses. The noun is derived from the verb tripoter, 'to grope', or 'to fiddle'. The noun in the caption affirms the realization of a desire that, however, remains unfulfilled in the accompanying image. Indeed, unlike the promise of its caption, the image shows us something else: outreached hands, not groping ones. As I noted above, the cartoon displaces the refugee's experience of the conditional (the “whatâ€¦ifâ€¦”) onto the future that the right-wing predicts for it. Similarly, it also seizes the refugee's gesture of plea and both misrepresents and mislabels it.

The word caricature, used in both French and English, derives from the Italian caricare (meaning 'to charge, exaggerate, load'). The Italian root illuminates a critical aspect of the history of caricature in what is often heralded as its Golden Age in the 18th and 19th centuries: the caricaturist's emphasis on the exaggerated or overloaded line. Thus, for example, Charles Philipon could, with a few strokes, simplify and distort the outline of the face of Louis-Philippe in 1831 into the shape of a pear in a caricature published for La Caricature. The transformation of line not only allowed the caricaturist to create new meaning out of old forms, but it also enabled him to reveal the meaning latent (indeed, concealed) in the original form. In this regard, the image's dissonance with the caption was in some instances as formative of the caricature's critique, as the consonance between the two was in others.

The protean nature of caricature thus prevents the neat demarcation of its politics. Indeed, published in the same years as Philipon's roi-poire were caricatures that besmirched the working classes and sought to maintain the social order desired by the Parisian middle class (Cuno 1994). Riss's cartoon may depict Le Pen's predatory migrants in order to mock her opinion piece. But it also caricatures or “charges” the conditional world of the refugee. A gesture of plea that underlines the refugee's submission to the conditionality of hospitality now becomes the source of his affirmed criminality. As such, just as Le Pen accuses refugees of criminality, so too does the cartoon charge them with the source of their own destitution. Now recall that Aylan is dead.

James Cuno, “Violence, Satire, and Social Types in the Graphic Art of the July Monarchy,” in Petra-Ten-Doesschate Chu and Gabriel P. Weisberg, The Popularization of Images: Visual Culture Under the July Monarchy (Princeton: Princeton University Press, 1994), 10-36.

Re: "On each boat, in each van, on the margin of every border, at each camp, over each meal, at each farewell to a loved one, at each reunion, at every instance of clinging to and handing over a document of identity, at every reminder of the lost home, against the gaze of every unwelcoming stranger, the life of the refugee necessitates the perpetual incantation of “whatâ€¦ ifâ€¦” against the unknown that lies ahead and the violence that is routinely expected within it. Furthermore, “Whatâ€¦ ifâ€¦” spaces a painfully unbridgeable gap between refugee and migrant. Riss's cartoon may caricature the right-wing imagination, but its caption fails to grasp, and even conceals, that the future projected onto refugees is the very source of their conditional present." Wonderful passage, in the context of a close and insightful reading of this rather distasteful cartoon (as a general matter Charlie Hebdo reminds me that humor doesn't travel well: I "get" French (non-comic) films; books; philosophy in a way that I just don't get French humor; although nothing can obscure the deeply nasty edge of Charlie Hebdo's brand of satire). Chowdhury might well be right that the caricature, from its origins, in general operates in a zone of ambiguity -- but where Charlie Hebdo in particular is concerned, this ambiguity (produced by the "readability" of their cartoons "from" both Right and Left in some sense) is in the service of the self-image of French secularism (one that is so addicted to the highs of the Dreyfus Affair and anti-clericalism that it cannot distinguish between speaking truth to power, and speaking truth to the marginalized, as if they were part of the power structure), and smacks of pandering to it, while cynically deploying the ambiguity to deflect critique...

Looks like you used 'Google Translate' to write this...