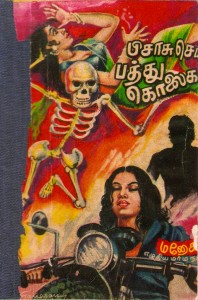 Following my interviews with Blafters Rakesh Khanna, Pritham K. Chakravarthy and Kuzhali Manickavel, my review of a number of books from the Chennai-based publishing house Blaft is up on Bookslut today. Here is an excerpt:

He was a dark man, with white hair and white teeth. A thick moustache covered his dark lips. His chin had a deep cleft. He wore a silk shirt, a polyester veshti, and a thick gold chain with a leopard claw pendant around his neck. He smelled strongly of perfume.
--From the story “Hurricane Vaij” in the Blaft Anthology of Tamil Pulp Fiction, Vol. I

A friend whose fiancÃ© was learning how to perform past life regression therapy once observed to me that it was odd how many people discover they were Cleopatra or someone else really famous in their past lives. Even people who do not find out they were Cleopatra, such as my father, a great regression therapy enthusiast, always discover they were human. When I argue with my father that it's statistically unlikely that all current living humans are reincarnations of previously living humans, and that traditionally animals, and bugs, and worms are thrown into the mix of transmigrating souls, he becomes irritable and says I don't know what I'm talking about. In Bollywood movies, reincarnation, a fantastic plot device, becomes even more narrow: young couples whose love transcends lifetimes (what's known as a janam-janam ka rishta in Hindi-Urdu) die under cruel circumstances only to be reborn in a human form exactly identical to their previous incarnations. Thus the same actor and actress can go ahead and play the lovers in their next lifetime as well.


Kuzhali Awesome Is the Most Fun Kind of Awesome | Michigan Quarterly Review | April 14, 2011

[...] More tasty chapatis! Mentions of Kuzhali and her publisher, Blaft, via the Mystery Man: The Blaftness of Blaft [...]