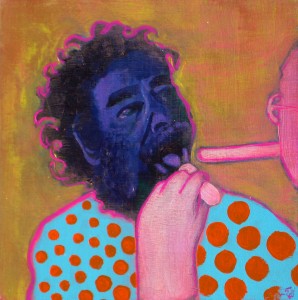 One thing that the First World really gets right is good dental care. The more money you have, the better the teeth. Unfortunately, despite the fact that we Americans (at least those with good dental insurance) have some of the pearliest, straightest teeth in the world, we are seldom grateful for this gift. The word 'torture' is probably used far more by Americans to describe visits to the dentist, the periodontist, the orthodontist and the oral surgeon than it is to describe water-boarding or taking photographs of prisoners of war in humiliating poses. That's why the US Government is so crafty when it shows us images of bad guys in captivity receiving dental care. Take the case of JosÃ© Padilla, who was shown in a small video being marched down the hall from his solitary confinement to get a root canal (wearing goggles and sound-canceling headphones to keep that solitary real). This little bit of film was so noteworthy that it was even discussed by Graham Bader in Artforum, according to Amitava Kumar, who writes:

Bader's point is that the most intensely politicized contemporary images are those that concern “the state's role in authoring the most basic experiences of life and death.” Images like those of “the broken figure of Jose Padilla, shuffling to the dentist down the hall from his cell” enter our conversations about art as new evidence to be examined and understood.

Having not, in fact, read the original Artforum article, I confess that I am flummoxed as to how the video managed to pass directly from the hands of Homeland Security (or the CIA?) directly into the pages of one of the nation's leading art journals. It's so hard to keep track of what art is nowadays.

My interest was piqued by the description, however, as it reminded me of one of my personal favorites in the galaxy of GWOT imagery, specifically the Iraq war: the photographs of Saddam Hussain receiving the best of all possible medical care at the hands of the United States military after he was dragged out of his hiding spot and taken into custody. It's one of those pieces of propaganda that makes it hard to decide whether you are looking at a really clever piece of psy-ops or an elaborate visual gag. How civilized, and how supremely humane of the United States to supply that bastard Saddam with the best possible dental care in the world! And yet, when Americans see the picture, we know what's really going on: they've sent the dentists in; he's being tortured.

I am sure that in Hussain's case, they were simply looking for Weapons of Mass Destruction.

You should see the x-rays! Cavities full of mustard gas.

I believe they found that someone had had faked implants.

Oh come on, this is clearly an unshaven Lord Krishna opening his mouth to receive a splash of the whitest and the creamiest directly from the cow's pink udders. I marvel at the reasons behind the devious dental care narrative crafted by the artist to sell divine Hindu art. Caveat emptor!

It reminds me of that scene from Marathon Man http://www.youtube.com/watch?v=YC6jzQpfflI

"One thing that the First World really gets right is good dental care. The more money you have, the better the teeth." So true, I discovered it early when i came here. Just by looking at somebody's teeth I could tell the guy was born and raised in the States or migrated later in his life. Frankly speaking you can even tell an irish immigrant to a US citizen , by birth of course, by just comparing at their teeth.

But the real question is: Did Padilla get to eat ice cream afterwards?