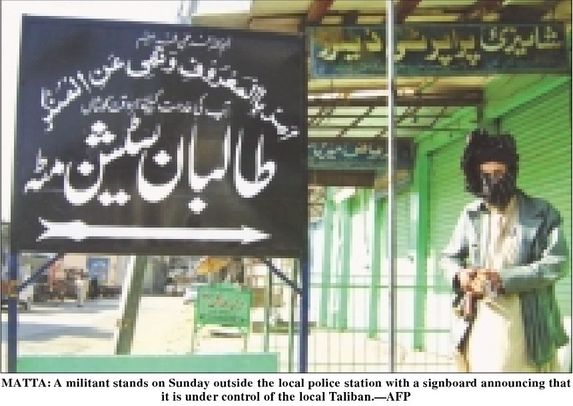 Who or why, or which, or what, is Maulana Fazlullah of Swat? Recent headlines from Pakistan have been grim - pitched battles with many reports of casualties and mass migration of civilians from the conflict region. Yet, the foreign media hasn't really focused on Maulana Fazlullah - perhaps thinking that the story of "Talibanization" covers this particular mullah just as well as it does any other (Baitullah Mehsud, in Waziristan, is slowly getting some attention, though). At a cursory glance, it all does blend in. The overall deterioration in the NWFP (North Western Frontier Province) and the FATA (Federally Administered Tribal Areas) areas in recent years - specifically in Waziristan, the Malakand Agency regions, Dir, Bajaur, Swat and areas around Peshawar - is often called "Talibanization" and is often pegged to the aftermath of the Afghanistan war of 2001. There is, though, a longer history that offers some additional venues of thought. At the very least, it tells us to pay attention to the local even as we highlight transnational movements like the Taliban.

Shah Ismail (1789-1831) and Sayyid Ahmed Barelvi (1786-1831), specifically, are pivotal figures in the memory and history of Swat. ((See, for example, http://ghazwah-urdu.sitesled.com/Articals/Jihad/Qafla/11.htm)) In the late 1820s, they waged a religious war against Ranjit Singh's forces for the control of Peshawar. They succeeded briefly, declared themselves an emirate where the creed of Muhammad held sway, and were swept away in 1831 - killed in battle. Shah Ismail and Sayyid Ahmed, though defeated, emerged as an integral part of the narrative of anti-imperialism. But not simply for their militant struggle for the establishment of an Islamic polity, they came to represent a profound connection to the revivalist thought of nineteenth century Muslims in India. Shah Ismail was the grandson of Shah Waliullah - the progenitor of the deobandis, who have continued to enjoy a wide following in NWFP. I know that it is more fashionable nowadays to connect Shah Waliullah to Abdul Wahhab and build an argument about some unitary "fundamentalist" strain of Islamic thought - but, it is a wrong notion. There are crucial difference, not only in history but in the theological arguments underlining deobandi and wahabbi ideologies of revivalist Islam. The deobandi, in particular, combined the idea of a polity based on Islamic Shar'ia and free from foreign influences with a more quixotic attempts to "migrate" or "settle" a Caliphate in Afghanistan. (The migration of thousands of Muslims to Afghanistan in 1920 needs recent historical attention.)

The mountainous regions between Kabul and Peshawar and across Baluchistan and Gilgit remained an odd absence in the centralizing ideology of Pakistan. Partly it was due to the linguistic and ethnic communities that stretched beyond the nation-state. Partly it was a function of the lack of political legitimacy for any federal government in the region. The Pakistani State, created with unequal halves of East and West Pakistan, proved unequal to the task of imagining itself. In 1971, Bangladesh emerged out of the political chaos and opportunism and military destruction wrought by West Pakistani armies. In 1972, Pakistan embarked on a new path to re-affirm itself. Zulfiqar Ali Bhutto, the father of Benazir Bhutto, was the chief architect of a program of Islamization to glue together the rest of Pakistan. He looked towards the Pan-Islamic movement to position Pakistan as an international entity that wasn't simply a footnote in the red hot Cold War. Bhutto's Islamization efforts continued under Zia ul Haq, who overthrew Bhutto in 1977. Except, that under Zia ul Haq, they became the Sunnification efforts to counter his (and Saudi) fears of a Shi'a revolution sweeping out of Iran and across the Muslim world. The frontier, as always, of these efforts was the NWFP. It is around this moment that the Soviet-Afghan war overshadows all local narratives but I would like to put in a call to study the movement of Pashtun men out of NWFP territories and into the urban centers of Karachi and Lahore - and further to Riyadh and Doha - for economic reasons. We are sorely lacking scholarship that can trace these movements back to the origins where petro-dollars (from doing labor in the Gulf States) transformed these small communities. (It is one sad casualty of our current myopia that we are interested only in the monolithic account of Soviet-Afghan war and the "Talibanization" and continue to stress "top-down" factors in our analysis.)

In November 1994, the year old government of Benazir Bhutto faced a crisis in NWFP. Some of the Pashtun tribal chiefs, led by a Maulana Sufi Muhammad proclaimed that Shari'a needed to be enforced in NWFP. His movement, the Tehrik Nifaz-i Shariat Muhammadi (Movement for the Establishment of the Path of Muhammad), enjoyed wide-spread support. He was shutting down airports and businesses and making life hard for the PPP. So, she cut a deal. It may be shocking to remember that this same Benazir Bhutto who is now proclaiming herself as the Sole Secular Leader was none too shy about cutting deals where it suited her. The Musharraf regime also turned to TNSM and Maulana Sufi Muhammad to try and operate in the Swat region. But, the Bajaur strike and the Lal Masjid crisis ended their partnership. Maulana Sufi Muhammad is under arrest but Musharraf is actively trying to broker another deal.

The reason is Maulana Fazlullah and his declaration of open hostility against the Pakistan military. Fazlullah is the son-in-law of Maulana Sufi Muhammad and has organized his own army called Shaheen Commandos. He is operating in and around Matta and openly calling themselves the Taliban. He is young - 30 or 32 - and comes from Imam Dheri area in Swat. Around a year or so ago, as the Imam of the seminary in Imam Dheri, he established an FM radio channel in the area to deliver sermons and became a local celebrity. ((FM radio channels have proliferated in the past 3 years as the key means of transmission of ideas and information. They are very cheap to set up, mobile and can usually transmit up to 80 miles. No militant is without one.)) After the Lal Masjid crisis, he declared jihad on the state of Pakistan. His Shaheen Commandos now control Matta. And the fight is slowly reaching the capital.

This is certainly a complex and deeply troubling development for the state of Pakistan. The rise of local militias and the oppressive reaction by the military was certainly a contributing factor in the secession of East Pakistan. And a similar pattern is clear in Baluchistan. Just two days ago, Mir Balach Khan Marri was killed - something that is sure to have wide repercussions for thatseparatist movement.

So to wrap it up: separatist religious movement in Swat, separatist nationalist movement in Baluchistan and a separate Musharraf from his dictatorship movement in the rest of the country. Things can only get better, no?

Sepoy, Thank you for writing this. We've been hearing a lot on what is going on in Swat, and I'm not sure what to make of what is going on in Swat, mostly because I'm suspicious of whenever the military offs people as "terrorists" and "fundamentalists." I think this comes from the situation in Baluchistan-- much of my reading points to the idea that Musharraf and the military get rid of people whom they call "fundies/terrorists" when in fact they are political opponents who are NOT fundies. Apart from Fazlullah's whacky radio broadcasts (which have been reported on), the decision to shut down schools etc, things are somewhat still fuzzy for me re: Swat. But your post gives a good background and starting point to what is going on. *** This is totally off topic, but when I read "But not simply for their militant struggle for the establishment of an Islamic polity, they came to represent a profound connection to the revivalist thought of nineteenth century Muslims in India," I remembered how I was surprised and my interest was peaked when I read in another book that there were staunch resistance from certain sections of NWFP which were against Partition and a religious based polity in any shape or manner. I really think there is a scarcity of giving exposure to movements of this kind in areas that we have basically tagged as "anti-democracy," pro religious politics, fanatical, and so on. It's like how people don't know that there ARE Pakistani communists when in fact there are...

[...] these issues in mind, Sepoy’s excellent post on the current happenings in Swat is timely. It has raised a point that I think is very important: [...]

And we thought we had defeated USSR in Afghanistan. Pay the price now PAKISTAN

Thanks for giving us a rare historical account about the chaos that is encircling NWFP and Baluchistan. I couldn't agree with you more when you say that we have very little understanding about what is happening in FATA, Baluchistan and Swat. It seems like there are too many vested interests who are happy chasing these ghosts of Taliban and Al-Qaeda to bother with the ground realities of these places.

[...] WHO OR WHY, or which, or what, is Maulana Fazlullah of Swat? Recent headlines from Pakistan have been grimâ€”pitched battles with many reports of casualties and mass migration of civilians from the conflict region. Yet, the foreign media hasn't really focused on Maulana Fazlullahâ€”perhaps thinking that the story of “Talibanisation” covers this particular mullah just as well as it does any other. At a cursory glance, it all does blend in. The overall deterioration in the North Western Frontier Province (NWFP) and the Federally Administered Tribal Areas (FATA) in recent yearsâ€”specifically in Waziristan, the Malakand Agency regions, Dir, Bajaur, Swat and areas around Peshawarâ€”is often called “Talibanisation” and is often pegged to the aftermath of the Afghanistan war of 2001. There is, though, a longer history that offers some additional venues of thought. At the very least, it tells us to pay attention to the local even as we highlight the trans-national aspects of movements like the Taliban. More on Manan Ahmed’s blog [...]

[...] Yesterday’s announcement that Zardari has made a deal with the TNSM and installed “Islamic government” in Swat is all over the news. I talked, briefly, with Jerome McDonald of Worldview today. My main point was that there exists a history - 1994, 1999, 2007 - of efforts to install a Shari-Nizam-e-Adl (Islamic Order of Justice) in Swat region. You can check my previous post on Swat to get a sense of this history, Akond of Swat. [...]

[...] Manan Ahmed observes elsewhere: It is one sad casualty of our current myopia that we are interested only in the monolithic account [...]