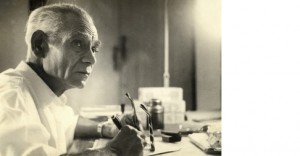 I have a new piece up at Caravan on Yashpal's great Partition novel, Jhootha Sach. It's very nicely reproduced, though I seem to have missed the weird new title during the editing process ("Night Smudged Light"). My title, "Late for the Party," must have seemed too cavalier. Here's an excerpt:

Jhootha Sach, first published in two volumes in 1958 and 1960, has long been considered by Hindi readers to be the most important novel on the Partition, but the fact that it was extremely long andâ€”until a year agoâ€”remained untranslated has kept it out of the robust conversation on Partition literature that has grown in recent years. I have waited nearly 20 years
now to bring up the novel in discussions on Partition literature without synopsising the entire plot and supplying a full biography of the author every time I mention his name. I have longed to loan it to friends and hand it out as a Christmas gift. Unfortunately, hardly anyone I know reads Hindi. And I suspect those who do wouldn't choose to read a novel of more than a 1,000 pages. This includes certain scholars who write about Partition literature and can read Hindi, but mostly rely on English translations, or have passed over Jhootha Sach in favour of shorter Hindi works. As Harish Trivedi remarks in his introduction to this translation, the conversation on Partition literature will need to be “substantially recast” now that Jhootha Sach is available in English. He adds, “So far, it may even seem, it has all been a bit like talking about Hamlet without the Prince of Denmark.” The Prince of Denmark has at last made his entrance; let the conversation begin.

Thanks for this -- I'm hoping to start reading this over the next couple of months (in English; I suspect it'll be quite a while before my Hindi is fluent enough to tackle a novel of this scale), and you really made the work come alive for me. One cavil: I wish more of the piece had focused on Jhoota Sach, although the "set-up" via Manto/Faiz/"partition literature" was definitely valuable. Aside: the article served to remind me (for the umpteenth time) that, the excellence of The Satanic Verses notwithstanding, Rushdie is an ass.

Qalandar! Is that really you? Thanks for the comments. The article was already like a billion words long, so they wouldn't have wanted much more. I'm working on doing a longer thingummy (a book?) that would inshallah fulfill all desires for further discussion on this that and the other thing.

Odd though it is for me to be saying this to someone with "lapata" as a screen name, it is indeed really me :-)

[...] But my father has absolutely and totally fallen for it and in these matters I trust his judgment. Mannan also loves it. I am still waiting for my copy. Its rather expensive though and I wonder if an Indian publisher [...]