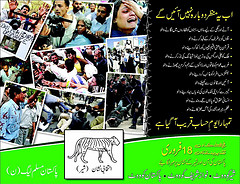 The nation of Pakistan - amid bombs and terror - goes to vote tomorrow. The early reports on Urdu media are not promising about the turnout. And the recent bombings have surely dampened any and all Get-Out-The-Vote efforts.

You can see the TV ads for these parties but I hear that most of the campaigning is being done by SMS/TXT messages. The snazziest TV ad belongs to PML-Q, which is the only campaign running on "record" as opposed to the cult of personality. If you are confused about the lion or the bicycle, those are the election symbols for the political parties. With a majority illiterate electorate, these symbols get stamped - often down the ballot sheet - and not names of candidates. Much political and symbolical (ahem) hay is made out of these electoral symbols. PML-Q is the bicycle, PML-N is the lion, PPP is the arrow, ANP is the lantern, MQM is the kite, JUI is the pen. The Election Commission of Pakistan has the full list to satisfy your curiosity [pdf link]. I have uploaded some print ads from dailies in Pakistan.

These elections, fixed or not, mean little for the people of Pakistan. The facto dictatorship is still facto. I just hope that no more bombs go off at polling stations etc. I will try and do a live-blog if I can find results being announced anywhere tomorrow. Else, please point your browsers to PK Politics for your election coverage. If you have any questions for me, feel free to ask.

To answer the question on every one's mind, the Islamist parties look to be heading for a national drubbing at the polls.

update:Via, NYT comes a photo of a ballot by Vincent Thian/Associated Press (rotated by me) 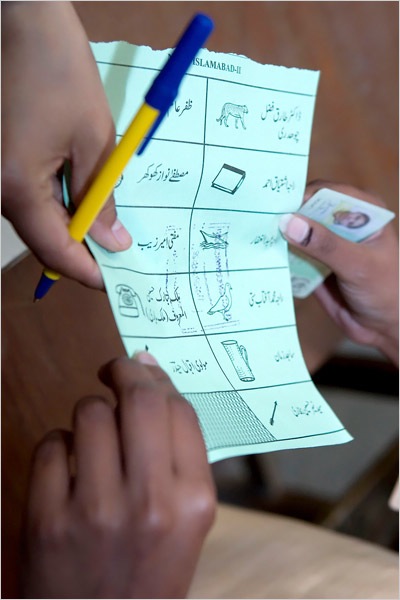 That's about the third question on my mind, though you're right that it's going to be high on most lists. Just ahead of that was, as you point out, the potential for disruptive violence, and the question of whether, if it does occur, it would at least give us a clue as to who the most dangerous enemies of democracy are in Pakistan. Ahead of that one is the question of how the de facto junta would respond to the results....

CNN aired a program called "Pakistan's Vital Vote" at 11:30pm Australian (Eastern?) time in which they cited a recent poll that showed that support for our favorite terrorist had dropped from 70% to about 1%. Also, barring the MMA's sweep in the NWFP last time around, the hard-line Islamist parties have never really done well in the polls.

Go vote! To hell with fear!! Bin Laden is the one in fear!!! Terrorists will not win. FREEDOM WINS! I am, George Vreeland Hill