In December, it is the custom of taste-makers everywhere to create lists of the ten best things of the year. Taste-makers, aware that they will be called upon to perform this task, work hard throughout the year winnowing 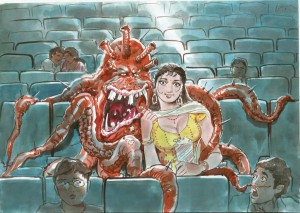 through possible entries into this category so they will be prepared by December to do their duty by the public. We are sad to report that no one at Chapati Mystery has properly planned ahead for the preparation of lists of the best things of 2010. But when we read lists drawn up by other people, and find names of authors we have never heard of such as a gentleman named Jonathan Franzen, we feel it is incumbent on us to create a list of our own. We must admit we were not paying much attention to whether or not the books we were reading were published in 2010. We could perhaps instead attempt to make a list of ten best movies, or ten best Broadway musicals, but we feel we have not engaged with these media with sufficient rigor. And so, with all good holiday cheer, we bring you instead our list of the ten best books we happened to read in 2010, regardless of when they were published.

(This list is alphabetically, and should not be taken as a countdown, or up)