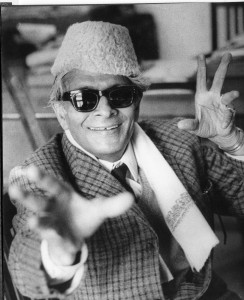 Here's a new interview with me about my translations of Upendranath Ashk's short stories compiled in Hats and Doctors. Here's an excerpt, on metaphors for the relationship between the writer and the translator:

Can you give us a metaphor for the relationship between a translator and a writer?

That's a good question! For some reason I think about this all the time. Sometimes, when I am feeling down about translating, I think of it as slave and master (where I'm the slave). Sometimes it's more like heckled, but slightly conniving wife and domineering but gullible husband (in that one, the translator is the wife). When I'm feeling grandiose, then I'm a psychic medium channelling the spirit of the author. I'd imagine a living author might also have all sorts of abuses reserved exclusively for his or her translator, especially if the target language is not known to the author. What is the translator doing to my book? Is he ruining it? Proust is said to have been quite unkind to his translator because his own command of English was poor, so he didn't understand many of the nuances. Gabriel Garcia Marquez has said very generously that the English translations of his novels by Gregory Rabassa are far better than the originals. What the relationship really boils down to is intimacy, fidelity, and occasional periods of resentment, which makes it sound a lot sexier than it actually is.

And later, I sent the interviewer a P.S., which the editors didn't include:

P.S. Just remembered I forgot to answer your question about Ashk's poetry. I have not translated it per se, but Girti Divarein is absolutely chock full of poetry in Hindi, Urdu, Punjabi and even English. Some of it is quoted from others, including Punjabi folk rhymes and songs, and some of it he's written himself. Recently a came across a poem a character recites 'in English' by the poet Ella Wheeler Wilcox. The words are all given in Hindi and I had to spend quite some time trying to find the English original to put in the translation (because it would be weird to give an English translation of the Hindi translation). When I finally found it, I saw that Ashk ji had taken substantial liberties with the original, making it at least twice as long and giving it a whimsical free verse structure, when Wilcox is a traditional strictly meter and verse kind of poet. That gave me some insight into how Ashk himself might view the question of fidelity in translation. And note the phrase I unconsciously used: 'to take liberties'--as though he had his way with the text. There's another metaphor for you)

And here's the Hindi version of Ella Wheeler Wilcox's poem, "Moon and Sea", for the deeply curious: 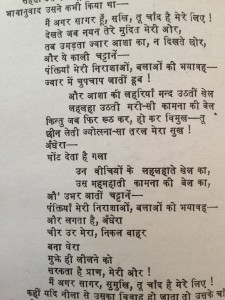