I wonder what the world would be saying if this game had the bearded fella sporting peyots along with that sporty 'stache. But since Muslims are the new (old) Jews, this sort of pure islamophobia will skip by without comment from the cognoscenti. 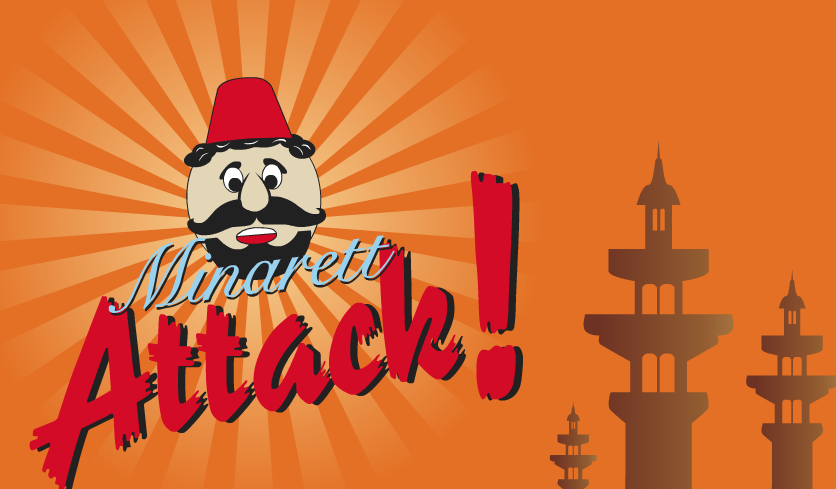 Lest you think this is more generalized immigration phobia and not religiously aligned hysteria, I present to you, Nassim Ben Khalifa, the Swiss soccer hero. A team with the two main strikers claiming the faith of minarets but which won them a world cup and the swiss hearts. As the Le Temp puts it, these Muslims are integrating quite nicely: 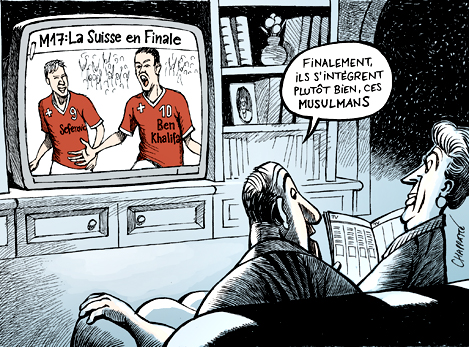 I was going to get on your case for linking to that Times story which pins too much blame on women's groups, but then I started reading the comments. To think I sort of pretended that moving to Europe was part of an effort to get away from this sort of thing (a naÃ¯ve fantasy, of course, but still...)

This article suggests that the minaret ban could be overturned by the European Human Rights Court: http://www.spiegel.de/politik/ausland/0,1518,664135,00.html (fourth paragraph from the end). But Switzerland is presumably not a member of the court. Does anyone know how such an appeal might work?

What's that George Carlin line about the Swiss? A thousand years of peace and neutrality and what have they given the world? Cuckoo clocks. I particularly enjoyed reading the bits where the Swiss government "respects the vote" but is trying to reassure Muslims that Switzerland isn't really like that.... Yeesh.

The referendum results were quite depressing, but hardly surprising...

During Hajj no less! Those racists...

...the more interesting thing is what happens now; my understanding is the Swiss government is now obligated to frame implementing legislation?

since Muslims are the new (old) Jews _______________________________ Seriously, you need to check yourself if you want to make sense to the academic mainstream. I have no idea what this means (other than Jew-envy, perhaps?). The position of Muslims, whether in the world at large, or in the West, has little analogy with that of the Jews. Maybe the Parsis are an analog--numerous, illiterate, poor Muslims are not--sorry, big-guy.

Lest you think this is more generalized immigration phobia and not religiously aligned hysteria, I present to you, Nassim Ben Khalifa, the Swiss soccer hero. A team with the two main strikers claiming the faith of minarets but which won them a world cup and the swiss hearts. Yeah, not to detract anything from their acheivement, epecially beating a really good Nigerian team in the finals, where no one gave them much of a chance; you should have mentioned that this is their U17 national team, not their international squad. The U17s are amongst the lower ranked youth teams in anycase. The vote doesn't surprise me, Swiss society does have some reactionary streaks that tends to react adversely to what they see as 'outside influences'; the strong internalisation of parts of the country like Geneva, just adds to this tension.

Yes, the U17 squad is very mixed, but even the squad that made the finals in South Africa next year features two players of Turkish origin, Inler and Yakin, with Yakin as one of the most-capped Swiss players currently active. Furthermore, the U17 squad is a sign of things to come, which is that Switzerland, including its national team, will get more and more Muslim and more immigrant.

Yes, the only thing I would say though, is that football is physically probably the most demanding and erratic sport at the moment in terms of player development and injuries; so apart from a few top players in every cohort, it is difficult to tell how many young players will make it after their early phases into the professional game. I didn't know Yakin was in the WC squad, thought he had been dropped since last year. He was good in the Euros though, from what I saw.

Yakin is probably transitioning out, as he was rode pine against Israel last month. However, Inler started, as did Derdiyok, who is all of 21 and who scored the point-saving second goal with his first touch off the bench against Latvia in Sept. So there were still two players of Turkish origin on the pitch at the opening whistle of the most recent Swiss qualifier. Yakin did come in off the bench in the previous match against Luxembourg. Either way, it's a safe bet that at least two of the three will go to South Africa this summer.

The referendum results were quite depressing, but hardly surprising.... Minarets: Ban Them, or Bomb Them?

I read somewhere that the fear of the minarets (phallus) relates to the fear of high Muslim birthrates.

I see they have removed the video game...

I wouldn't overrate the Swiss' decision to ban Minarets. The Muslims here are reacting very reasonably, showing their disappointment but not acting enraged. There are 4 minarets so far - there were no big plans for many more. It's a little bit like the argument of a Sanaullah who commented in a Pakistan Labour Party Forum last week on the death sentence on one of the Gojra Christians on desecrating the Quran: >>It may sound ridiculous but I have heard that sometimes courts of first instance pronounce death punishment in such cases to save the life of the accused as they know the weakness of the evidence will lead to acquittal from high court but death penalty may help the hounds [in that case the Jamaati Mullahs] to cool down and hopefully forget about the matter.<< We give the SVP and the initiative founders their victory and they will stop/diminish their horrible populism on Islam that actually may lead to a rift in society at one point since support for them is rising. The minarets won't. Little known fact, in one of Austria's provinces Minarets are banned now for quite some time already. And the same "discussions" (one sided media-digging-out-half-truths commentaries in newspapers) that have preceded the popular vote here and have turned quite nasty are quelling in Austria for years now. There its still getting worse. Here in Switzerland it's about to cool down again with the vent they got on Sunday.

"Europeanization and globalization have fueled social and cultural anxieties that imbue the rhetoric of fear with emotional resonance as well as political salience. Although the European right is not alone in its evocation of insecurity, it has been the most effective in bringing the emotion of fear to the foreground of political discourse in Europe." http://www.rorotoko.com/index.php/article/mabel_berezin_interview_illiberal_politics_neoliberal_security_populism_eur/P0/

If this is the attitude of the West regarding Muslims, then why should Muslims feel any tolerance for non-Islamic symbols in Muslim land? It is only fair to ask. Nonetheless, Churches and temples continue to be built with full galore in Islamic countries. There is no talk of banning the church bell, or removing the cross. No Christian Nuns are harassed for wearing their headcover. It is interesting to note Western sensibilities (rather insensibilities), that they see Hijaab as demeaning to women but have no qualms about catholic nuns being forced to stay celibate as part of religious requirement denying them the right of legitimate sex. Similarly, on one hand all the hell break loose when Muslims request not making fun of their religious figures. The west takes that as violation of their freedom of speech. On the other hand they are,hypocritically, quiet when a Jew violates the same freedom of expression if some westerner dare to draw a cartoon or criticize Holocaust. Why can't Holocaust be criticized? Why can't you say that "O Jews!!! enough of your Holocaust rant. Stop playing victims now. You are no more victims. You are actually perpetrating the same crimes to Palestinians now..." Why don't you draw a cartoon on that? Why don't you force jews to assimilate? Jews still get to built their temples with full galore. Jews still get to celebrate Hanukah. Jews still get to wear the skull cap. Why these double standards? Why are you silent on that? Your silence is deafening.