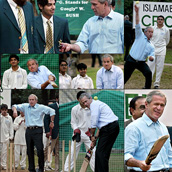 Seldom is it that my worlds collide so drastically. But, a simple one-line email frrom desiknitter pointing me towards the photo-essay of the Chosen One in Islamabad's embassy row playing cricket with a bunch of kids while Inzammam and other looked on, did just that. No, it wasn't just the sight of the Chosen One engaged in the 'pastime' that consumes me soul, but how the photo essay stood in for all that has gone wrong for the world and right for the Chosen One. Below the fold, I read between the pixels...

It's almost like he's daring us to make fun of him for something silly, so he can get away with some really serious shit while we're being snarky, or whine about how mean those pesky Democrats (and other non-Republicans) are. That last picture is just eerie. Like a nightmare about an old-school teacher with a paddle and a leer....

Great photo analysis. But tell me, why didn't they think it necessary to even put bails on the wicket? I'm shuddering at the thought of SRT or Waugh winking at the camera that way after scoring a century..

I can't stop staring at that ludicrous belt of his. I wonder how long he's practised bowling to get a form like that, though. then again, aping is his forte.

Ah, but what would Dire Straits think of the title "Sultans of Swing" being used to this end?

Manan, these are great! I'm passing them on to my whole family. :)

You know, it's not like I've ever been massively fond of cricket (I know, weird for a desi guy, it must be the gay thing), but I feel an even greater distaste for it now, having seen Bush with a balla.

oh god, that nose picking pic and caption had me falling off the chair, literally.

Don't you think Dubya looks like an older version of Ponting?

Yep. I said the same thing to meself.

only salman butt is cute