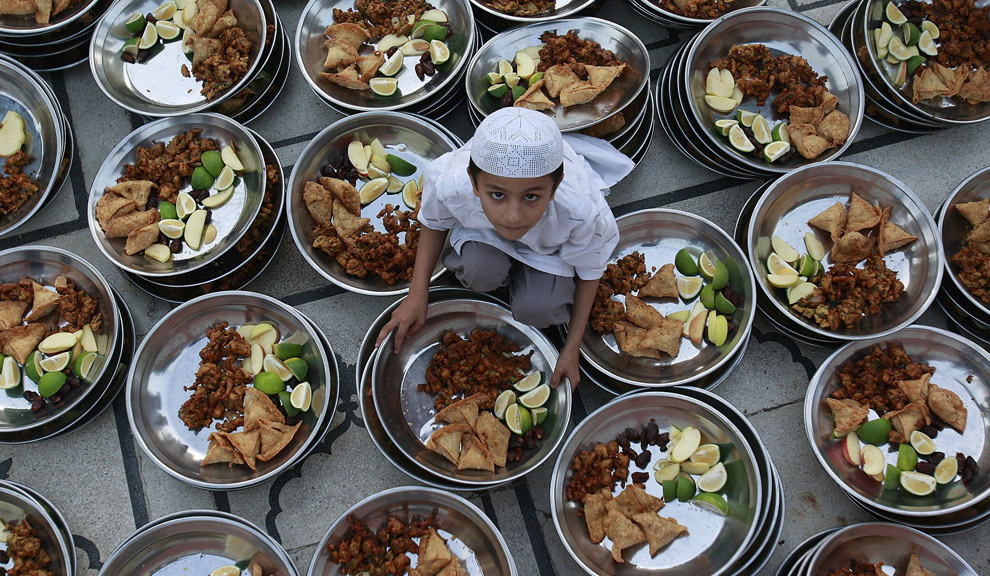 Over at Big Picture, my favorite blog if you care, is a wonderful series, Observing Ramadan.

jinx (via the same source?) the Damascus one made my mouth water, but nos. 9 and 33 took my breath away.

Thanks for this! I have to ask though, what is the drink in photo no. 12?

That gentle concoction is milk/lassi with Roh-e Afza - the "Drink of the East". I will properly introduce that drink to CM, soon.

Well, now I feel really silly - I figured it was some rose drink but Rooh Afza totally slipped my mind! Probably a sign that I haven't been back home at the height of summer for far too long. Rooh Afza with cold water and lots and lots of ice is my mothers favourite summer drink. I find it a bit too rosy in taste - and mixed with milk, a bit much too handle.

a bit too much to handle.* Gah.

Sepoy: "That gentle concoction is milk/lassi with Roh-e Afza - the “Drink of the East”. I will properly introduce that drink to CM, soon." Will you also introduce the lovely bhaang lassi?

can you also properly introduce us to the tale of the two partitions of hamdard (waqf) labs?

Stunning pics. Those are some big-booty jalebi that are being sported in Bangladesh. And pic #35 is just too adorable to put into words :)

Interesting to see the ratio of the geographic locations in these pics: most are from Palestine, Pakistan, Bangladesh, some from India, Indonesia. None from the Maghreb (unless Egypt is considered to be classified as such), but boy, do the Moroccans know how to celebrate by eating. Ramadan included.