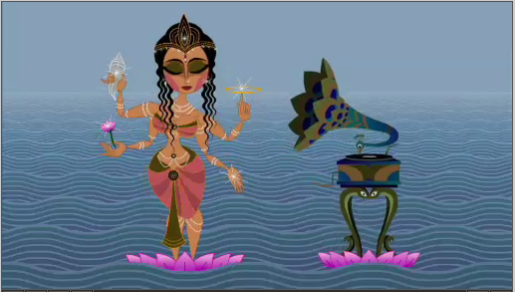 Then go pay your regards to Director Nina Paley.

Love it. Beautifully animated, and the shadow puppet segments are hilarious. I'm definitely going to check in with Nina to see if I can show this as part of the South Asian Film Series at my college. The bit where Hanuman burns Lanka always reminds me of the monthly Ramayana performance I would watch at the Prambanan temple complex in Java before the tsunami caused it serious structural damage...the guy who would play Hanuman would actually light his "tail" on fire and burn up a carefully arranged wooden "Lanka."

So much fun to watch this again--we went to the premiere at the Tribeca film fest (after seeing bits and pieces online as the project evolved, and even donating)--and got treated to an entertaining Q&A with Paley and the cast, including the actors who voiced the hilarious shadow-puppets. Love the soundtrack, too.

Wow. It's like Joseph and the Amazing Technicolor Dreamcoat... funny, but also very effective, and technically flawless.