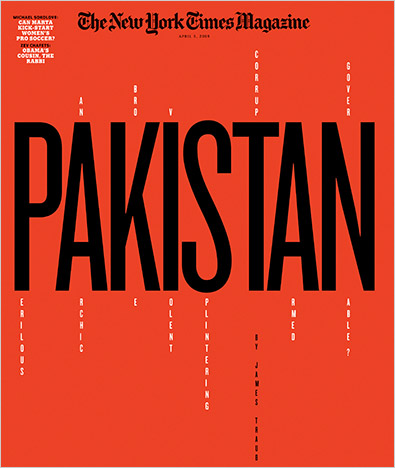 James Traub's cover-story, Can Pakistan be Governed? is actually fairly nuanced and one of the better things to have appeared in NYT recently.

More important, is the cover image for the magazine. I like to compile short-lists of reigning conventional wisdoms on Pakistan, and this cover is a beauty. Check it:
PERILOUS
ANARCHIC
BROKE
VIOLENT
SPLINTERING
CORRUPT
ARMED
GOVERNABLE?

The casual glance at this list confirms every fear in our secret liberal (or neo-con) hearts even as the 8000 words inside proffer a more complex world. But who has time for complexity? Or use.

update: Anil gets the brownie for Wordle'ing the Traub article. Thanks, mate! 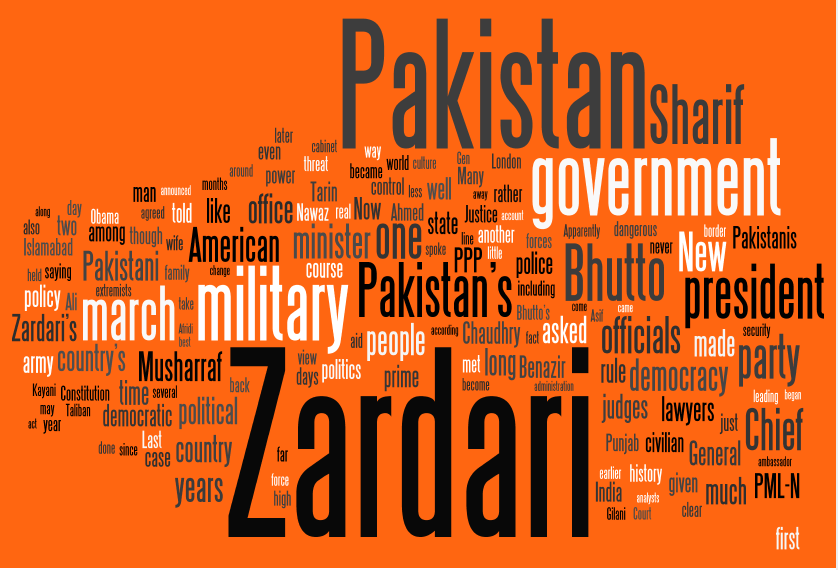 Title remind me of Tariq Ali's "Can Pakistan Survive" which came out in the early 1980s - I picked it up at a 2nd hand bookstore a few months ago and am leafing through it now. I was always sceptical of books with these titles since they invaraibly make grand claims which might not be borne out by events - can't forget Selig Harrison's "India the Dangerous Decades" from the 60s which foretold an imminent implosion there, that never quite happened. But Ali's book though 20 years old still sounds so fresh and relevant in some of its critque of the Army, the role of the US in undermining Pakistani democracy, the tensions created by Afghanistan and the problems created by the rise of Islamist politics. 20 years ago when Ali's book came out and Brian Lapping could start the episode on South Asia in the BBC series "End of Empire" with the comment that by any standards India was a moderate success as a nation-state and Pakistan a failure - these judgements would have seemed out of place, made by generalists who either over-simplified a complex picture or had not freed themselves from the last clutches of Orientialism. Today, though, the picture looks bleaker and their judgments/criticisms seem less ridiculous. Don't agree with them, still, but forced to take the weight of their arguements a lot more seriously now.

Conrad, I agree. Every generation seems to need its "Asian Drama." At one level the discourse on state failure is functional for extracting resources from the US (and for legitimating US assistance and/or intervention in a range of weak states). In this regard, the discourse on state failure operates in a manner similar to non-alignment. At another level, it would be irresponsible to ignore the fact that states like Pakistan (and several others in South Asia) have not been delivering basic social services to large segments of their population for some time. In my eyes, this does not constitute "failure" per se; it is unfortunately the normal state of affairs in most of the low-income countries. Real state failure, in the sense of a complete collapse is certainly still a remote possibility, however, the emergence of shadow states (in the sense developed by Stacey Hunt) in regions that were never fully incorporated by the post-colonial state are worthy of our attention. If for no other reason than for the impact on what Hunt terms "el pueblo" that exists under these dual regimes. What escapes the attention of the popular media, which remains fixated on the failings of South Asian states to meet a Eurocentric conception of sovereignty, is the ways in which the East Asian and South Asian states are developing new forms of sovereignty through the development of road networks in neighboring regimes. I wonder why it is that Asian states are always measured by their inadequacies rather than their innovations.

Hi, Popular media generally assume that areas which don't interest the elites in the home country they publish in are unimportant. So if something is important to India, but not to the US, there will be a strong tendency to ignore it. It is worth noting that what strikes us in the US as "state failure" seems to strike Indians as the Pakistani state making selective use of its own apparent failures to avoid being punished. They think when the LeT launches a terrorist attack in Mumbai, it is not so much evidence of the inability of the Pakistani state to control terrorism as the unwillingness of the Pakistani state to accept responsibility for acts that it could control. I'm concerned that the Pakistani state may not be failing in its aims, but that its aims may not be compatible with the Europe derived concepts of sovereignty we are used to. Also, it is possible that after the storming of Lal Masjid, that many of the Pashtun tribesman have lost their probably always moderate allegiance to central authority, leaving Pakistan drifting toward civil war. But I can ramble on. If you want to read more from me, I have a blog at: http://rememberjenkinsear.blogspot.com/ If not, thanks for reading this. Ray,

Traub's article, Wordle'd: http://www.wordle.net/gallery/wrdl/728460/James_Traub_-_Can_Pakistan_Be_Governed_(NYT) Makes your point visually: PERILOUS, ANARCHIC, BROKE, VIOLENT, SPLINTERING, CORRUPT, ARMED, and GOVERNABLE don't even appear to make it into the diagram. Closest we seem to get is "dangerous."

Awesome. Thanks! I updated the post above with this.

Ray, Hi. Doesn't your read of the media beg the question: who influences what is of interest to elites in a particular country? This leads us back in large part to the media itself. The majority of the popular media works within standard narrative structures (e.g the figure-fulfillment model, the white man's burden, the noble savage, etc.), very few seek to challenge their readers to think critically. The best that the popular media does is add a bit of nuance and sophistication within generally formulaic story arcs.

Funny that the wordle doesn't have India in it. Have you seen Usher? http://www.lrb.co.uk/v31/n07/ushe01_.html

Here's the latest geopolitical twist: "China concerned over militant activity in Fata" The Nation online http://tinyurl.com/cq3w3t "now China has also warned Pakistan that East Turkestan Islamic Movement (Etim), a separatist militant group from Xinjiang province, was plotting and planning attacks to coincide with the 60th anniversary celebrations of the communist revolution, from inside Pakistan's tribal areas..."

[...] a) he is told but b) he noticed the New York Times Magazine cover-story on the country from 2009. A cover story which imagines Pakistan descriptively as “perilous, anarchic, broke, violent, splintering, [...]