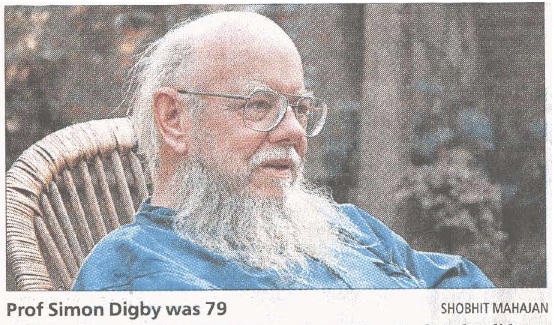 Via Naim Sahib comes the sad news that Simon Digby, 79, passed away in Delhi. Anyone who has touched any scholarly/popular work on medieval to colonial India - esp. aspects of religion and art - has seen the fruits of his amazing intellect reflected in those works.

I will try and find a full biography but let me note the following from on-line sources:

SIMON DIGBY is a former fellow of Wolfson College, Oxford and a former assistant keeper in the Department of Eastern Art, the Ashmolean Museum. He continues to serve as honorary Librarian of the Royal Asiatic Society of Great Britain and Ireland, a position he has held since 1971. The foremost British scholar of pre-Mughal India, he has written numerous foundational essays on Indo-Persian Sufism as well as contributing to The Cambridge Economic History of India, volume 1.

In 1919 the Royal Asiatic Society established a formal lecture in the name of Sir Richard Burton, the British traveller, scholar and translator. In 1923 it decided to bestow a medal upon the lecturer. The recipient of the medal is required to have been not just a dry-as-dust scholar but someone who has actually engaged, as Burton did, with Asian societies in the field. Among recipients of the medal have been St John Philby and Freya Stark, both renowned for their Arabian explorations, and more recently W.G. Archer, the Indian Civil Servant who collected Indian village songs and tribal art as well as introducing courtly traditions in the visual arts to the general public, and David Snellgrove, the scholar-traveller in the Hindu-Buddhist worlds of South and Southeast Asia. In 1999 Simon Digby, the scholar of Indian Sufism, was the Burton lecturer.

update: More details on his life and times appear in Indian Express: After a lifetime loving India, historian Digby breathes his last: in Delhi (pdf). He was truly the last great orientalist (it is high time to reclaim that word from Said).

update 2: My thanks to Prof. Shahid Amin for sending in the photograph/pdf from Indian Express. 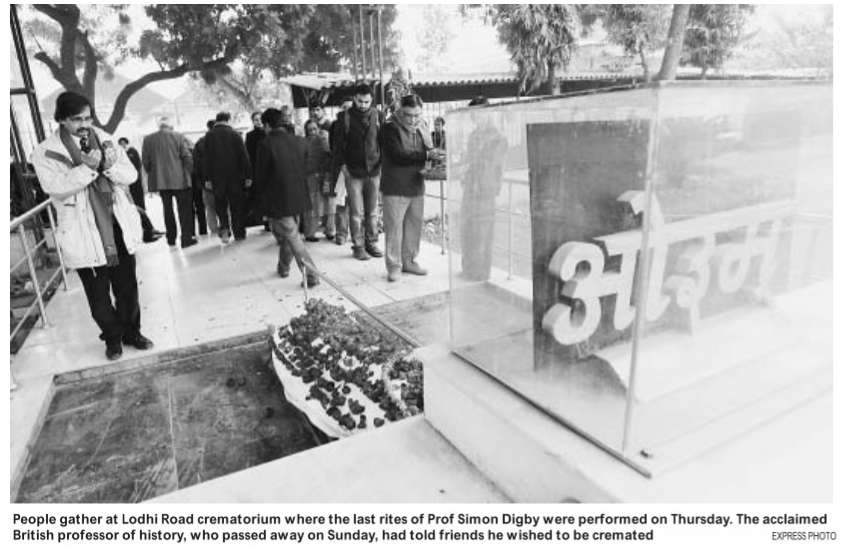 update 4: An obit in Telegraph India by Rudrangshu:
Mukherjee: "Simon was one of the last of the truly amateur scholars."

Sad demise of a great visionary.

Sad News, remembered reading his 'War-horse and Elephant' as a grad student and enjoyed his essays on religion in the Deccan.

Sad news indeed. He could walk into a monument in Delhi and date it by the rhetoric of its Persian inscriptions and put scholars everywhere in awe of himself by his knowledge of sources in Persian, Hindi, Urdu and Nepali. He must be one of the last of those Brits who "stayed on" in India. Well, almost.

Simon Digby was Librarian of Royal Asiatic Society from 1968 to 1984.

He was an original. We are diminished by his passing and shall not see his like again. He was born in India and now he has died there. He preferred being in India to being anywhere else. According to his friend Richard Harris, he will be cremated tomorrow or Thursday and as he requested his ashes will be "immersed in the flowing water of a river". The world won't be the same without him.

It has been confirmed that Simon's mortal remains are to be cremated at the Lodhi Road Electric Crematorium at 12 noon IST on Thursday January 14. The ashes will be immersed on the same day.

i was at his funeral in delhi. an eminently well attended affair, which in its own way reflected the eclectic diversity of simon digby's passions and friendships. he was truly the last great orientalist, a word which really does need to be reclaimed.

I just wanted to add a few thoughts of my own on Simon Digby. I got to know him some time in the late 1980s or about 1990 in Delhi. I think it was initially through Muzaffar, since he used to visit Muzaffar and Rizwana regularly in Dakshinapuram. I remember having a discussion on Mutribi Samarqandi's text with him, and Simon's extempore recitation of Persian verses on the subject of khatt-i-sabz (“down just appearing upon the cheek”), a subject that features in Mutribi's encounters with Jahangir. Simon was of course a marvelous eccentric. He collected material over a very curious range of subjects and had the most amazing memory. David Shulman recalls (as a Ph.D. student at SOAS) being guided by him over the premises of the Royal Asiatic Society and being given the most precise explanations of every conceivable object, nook and cranny. He also collected objects, manuscripts, pan-holders and so on. I never visited him in Jersey, but Muzaffar (who has) remembers the dazzling array of objects as well as the fact that he began each morning listening to qawwali and bhajans. We once went on a trip to Senji fort in Tamilnadu — David, Narayana Rao, Simon and I — in January 1997 while on our way from Chennai to a conference in Pondicherry (where he presented his great paper on Lodi-period historiography). By the time we got to the fort, it was almost dusk and the chowkidars warned us to be careful. But Simon scuttled off with his stout walking stick and we could hardly keep up with him. All of a sudden, he disappeared from sight and there was a loud crash. Simon had fallen into an underground granary. The distressed chowkidars shone their torches down and there he was, sitting up and blinking at the bottom of the treacherous stairs. “Mein bilkul thik hun”, he insisted, refusing to acknowledge that they only spoke Tamil in those parts. And off he was a few minutes later. I have a very funny photograph from that visit that shows him peeking out mischievously from behind a temple pillar between Narayana Rao and me. In the late 1990s, we spoke briefly of collaborating on travel accounts, which Muzaffar and I were also working on by then. But eventually that turned out not to be feasible. Simon wanted to publish annotated translations and we were after something else. Eventually, we decided on a sort of division of labour. One of the last offprints he sent me was his translation of the Hajj sections of Bayazid Beg's account from the late sixteenth century. He was going to publish his translation of Azfari's travels, and so we decided to stay with the sections of the Waqiat-i-Azfari having to do with Delhi and Lucknow. Simon had an acute sense that there were very few people in the British academy who shared his interest in Persian and vernacular materials for historical (rather than purely literary) purposes. By the 1960s, almost everyone there in history was working exclusively on English-language materials. He could really find kindred spirits there only amongst the art-historians. This was one of the reasons — besides a common interest in Aurangabad — that he took greatly to Nile Green and kept in touch with him in recent years. He therefore gravitated from the late 60s to people elsewhere, Marc Gaborieau in Paris, Yohanan Friedmann in Jerusalem, John Richards and others in the US. In India, he was for a time close to Iqtidar Alam Khan to whom he dedicated his 'Warhorse and Elephant' (if I am not mistaken). It was his only full-fledged attempt at a monograph so far as I know. His preferred mode of expression was the essay, and he also liked to return to his essays, and polish them, once, twice and thrice. He had done extensive revisions to his Dattu Sarvani articles from the mid 1960s, amongst a whole host of other things by him that await publication. I hope his many friends — Shahid Amin, Muzaffar Alam, Sunil Kumar, and so many others — will collaborate to bring these out. Just some thoughts. I think Shahid and others will write at greater length.

I met Simon on a train going from Pakistan to Iran in 1965 and we both watched the goings on every time the train was stopped for 'inspections' by various 'authorities'. He explained that the 'authorities' were selling the clothing back to those who were wearing more than they needed. Apparently they were taking the clothes to Iran to sell for a profit and the 'inspections' were in fact a local and unofficial tax'. Upon arrival in Esfahan we spent some time going around the historic buildings and he translated old old old bits of engraving here and there. I was impressed - so much so that I began to learn classical Greek a few months later in Greece. (eventually an A level)

Simon was a dear friend of my husband and myself. We are indeed diminished at his passing away.

I first met Simon when I was an undergraduate student at the Chelsea School of Art in the early 1970's. Despite our moving in completely different worlds he became and remained a dear and treasured friend. He could be as exasperating as anyone I have ever met, but he was always generous to a fault and excelent company. I miss him greatly.

I got to know Simon when he was in his last year at Trinity Cambridge where he was reading history. He told me that his tutor told him that he had a chance of getting a first class honours degree if he stopped "messing about learning Arabic." Simon paid no attention to his tutor and continued with his Arabic. When Simon got his first class degree in history his turor was so angry that he cut him when he passed him in the street. I knew little of his academic side but he was a wonderful friend. He was an affectionate and amusing friend and the most unselfish person I have even known. I shall miss that braying voice and his extraordinary laughter. He used to stay sometimes with us in London, always bringing an original and fascinating present such as a little silver box with a cabochon amethyst on the lid or a Russian wooden box with unused Victorian stamps and an ancient 'thruppenny' bus ticket. He was the only Englishman I knew who noticed any jewellery one was wearing. And he made the best duck pilaf I have ever eaten. Once I asked his advice for buying a carpet. Instead of overwhelming me with art-historiacl details he said typically: "It's very easy to choose a good carpet; if you like it you'll get it right."

I lived in Simon's home on Burchington Rd, London for about 2 years from 1977 - 1979. I was responsible for taking care of Simon's rooftop appartment. I lived downstairs. I throughly enjoyed spending time in Simon's apartment, looking through all the wonderful books, manuiscripts, and enjoying the wonderful art he had around the apartment. Simon travelled allot and I took care of his mail while he was away. He called me one day and asked me to look for a book that was somewhere in his living room, I found the book on the floor by the telephone. Simon called me back to see if I had found the book, I told him I had and he told me that someone would call me and arrange to pick it up. A few day's later the book was picked-up by a very well dressed woman in a very fancy car. When Simon returned a month or so later he told me the story about the book. I loved Simons stories and enjoyed when he had friends visit. I also made a trip to Jersey and visited him in the house owned at that time by his aunt. The visit to his aunts house was majicial, a wonderful day. I was so sad to read of Simon's death today. However, I was glad to know that Simon had known for such a short time that he was ill. I know how much he loved India and hope that he is at peace. thanks for the memories Simon. Lorcan G. Brogan