A couple of years before he lost his mind, Ram Gharib Chaube, assistant to the ICS ethnologist William Crooke, and chief clerk in fellow Irishman and batch mate George A. Grierson's Linguistic Survey of India, persuaded his master to let him collect folksongs about the Mutiny — worth their while as "indicators of the real feeling of the people fifty years after the occurrence".

As befitting subaltern compositions in the Awadhi and other dialects, a large part of the Chaube Collection turned out to be dirges in the feminine register, as of the banishment of Awadh Nawab Wajid Ali Shah to Maita Buruj in Calcutta: "tum bin hazrat, aaj mulk bhayo suuno/ â€¦ Angrez Bahadur ain: muluk lai linho" (Without thee, my Lord, our des is now forlorn/ the Great Brits came and snatched away our country!) Another, a sensual longing for Raja Gulab Singh, the Thakur rebel of Barwa Batola, Hardoi intoned in the Dadra mode: "rahiya tori herun, ek baar daras dikkhawa re." To which from his garhi-fort responded the Raja: Hear my words, Lady, I have slain foot-solders and cavalry, have slain a countless army. Or this love ditty sung by Gujar women of Saharanpur: "Logon ne lute shaal dushale; mere pyare ne lute rumal/ Meerut ka Sadr Bazar hai, mere sainyan lute na jane" (The Cantonment bazaar in Meerut is up for grabs after the mutiny in the barracks, and my gauche darling does not even know how to plunder properly).

Grierson and Crooke, Chaube's superiors, were both graduates of Trinity College, Dublin, had joined the coveted Indian Civil Service in 1871 along with Vincent A. Smith and four others from the same institution. This was the distinguished Irish contingent of District Collectors who contributed to colonial India's knowledge economy, as our present rulers are wont to call it. Smith, a prolific historian, also unearthed Kasya, the site of Buddha's niravana, 50 kms from Chauri Chaura. Crooke and Grierson were not expressly concerned with our history, being more concerned with matters ethnographic and linguistic.

Those of us in the business of fathoming the languages and cultures of our long past continue to engage with what these Irish-Collectors produced during their tenure as functionaries of the Empire. In his Tears of the Rajas: Mutiny, Money and Marriage in India, Ferdinand Mount, former editor of the Times Literary Supplement and author of two dozen works, essays the long nineteenth century of imperial rule, largely through the life and times of his ancestors-- a clan of redoubtable Lowland Scots. The book turns out to be a saga-- it is intended as such-- of their to-ing and fro-ing in nineteenth century Deccan and Hindustan and in mountainous Chitral. 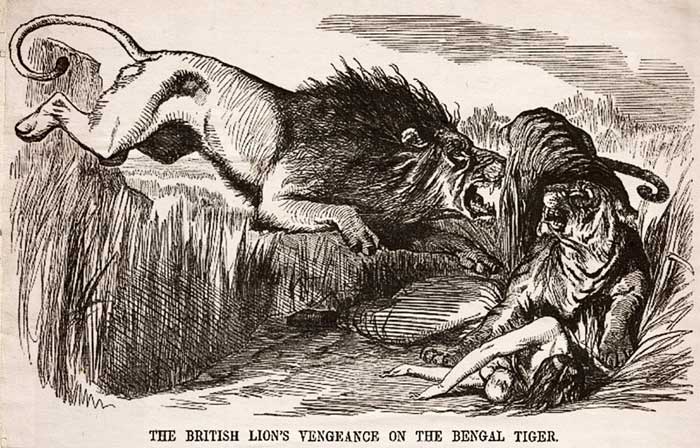 Goaded by a desire to write down "the whole imperial experience", glory, warts, horrors and all, Mount characterizes his labour of love less "a group biography", more "a human jungle book". The several Bagheeras are the Rajas, Peshwas, Nawabs, as they are increasingly hemmed in the Company Bahadur's menagerie, tearful protestation of continued loyalty to the Resident sahib John Low, the great grandfather of the author, notwithstanding. John Low, subsequently General Sir John, 'took an active part in deposing three kings. â€¦ He deprived a fourth raja, perhaps the grandest of them all, of a large part of his kingdom. He survived three shattering mutinies'. Seventy years of age and in straightened circumstances, he was offered the lucrative sinecure (Rs. 90,000 per month) of Military Member of the Supreme Council of India by friend and fellow Scot Lord Dalhousie in 1853, which he graced till the end of the Mutiny and Rebellion of 1857-58. 'Yet at no time', avers Mount, basing himself on Low's public and personal correspondence, 'do you have the feeling that he was spurred by a sense of imperial mission'. 'He wanted, if possible, to do his dutyâ€¦ [and] that too was shadowed in doubt and mired in misgiving'. Between 1771 and 1909 there were never less than 20, sometimes twice as many, of the Lows' extended family, most of them doing this sort of duty-- 'the Lows, the Shakespears and Thackerays (of Vanity Fair fame), all knotted together by marriage and regiment and patronage'. 'All over India'-- Uttar, Dakkhin, Poorab, Pacchim-- 'they were busily engaged, â€¦ fighting, collecting taxes, dispensing justice, scolding maharajasâ€¦ for none of them was ever idle — the Lows were not Lowland Scots for nothing', Mount tells us towards the beginning of his labours.

And what an enormous amount of labour has gone into this wordy monument to Scotland's 'work in India'! With 600 pages of text, and another 130 pages of notes and references, this quite literally is monumental lay history — a veritable kitab-e-azam of the British Empire in India. Reading it for the better part of a week, I often got lost in a jungle of detail about Memos, Demi-official and personal letters, or pre-emptive or condign military action which either saves the day, or functions as an object lesson for restless or impudent 'natives'-- Mount has no time or inclination for such scare-quotes.

Natives are all over the page in this book but, as with John W Kaye's classic History of the Sepoy War, in their appointed place; and given the proclivity of Mount to slide between painting a picture of those times and his own considered views on nature and direction of British Rule, the effect for Indian readers, can be disconcerting. Sometimes a distinction gets drawn between natives of those time and present-day post-colonial scholars; once the descriptive category Indian historians is deployed: 'Both British and Indian historians have been slow to grasp that the [1857] rebels had any systematic purpose and practice at all'. And while the behaviour of individual British actors can 'be minutely scrutinized' because 'the sources on the British side are abundant', papers 'in native languages' have not had had a really good 'dekho', the 'herculean labours of Mahmood Farooqui in the National Archives' notwithstanding.

One of the central arguments of Mount is that the first half of the nineteenth century saw the 'gradual emergence of grizzled Company colonels into position of political power. Men who had spent their youth under canvas or in cantonment alongside their sepoys'. Men like John Malcolm of Central India and Malwa, Henry and John Lawrence of Punjab, William Sleeman and James Outram, one of the heroes of the recapture of Lucknow, whose name is still commemorated in Outram Lines next to the stinking 'Ganda Nala' (sewage drain) near Delhi University which, as Najafgarh Canal, was an important source of fresh water supply to the British on the Ridge during the siege of Delhi (June-September 1857). And of course John Low, an ancestor of the author. Functioning as British Residents at the Peshwas, Rajas, Nizams or Nawabs of Poona, Mysore, Hyderabad or Lucknow, they were responsible for 'pacifying' the countryside, 'for introducing new crops and new methods of cultivation, for trying (but more often failing) to make (land) taxes fairer'. Their principal virtue was 'their unwillingness to push things too far' in India. They were opposed not by the locals, but by a different set of British, the 'Modernizers' who wished to hurry colonial India into modernity.

The result was the conflagration-- 'more like the spread of an epidemic', a veritable 'contagion' avers Mount-- the Mutiny-Ghadar of 1857. There is understandably a good deal here on the irregular and immoral annexation of Awadh: John Low had functioned as British Resident at Lucknow, and acquiesced, albeit reluctantly, in the Governor General's gobbling of the 'ripe cherry' that was the Kingdom of Awadh-- memorably caricatured by Satyajit Ray in Shatranj-ke Khilari. This is followed by a standard recounting of the myriad events that constituted 1857, a fast paved narrative of the loss and recovery of large parts of the Company's India possessions, stories of individual valour and heroism. Thus the 6ft 2in tall John Nicholson 'with dark grey eyes with black pupils which under excitement would dilate like a tiger' (here Mount is quoting a source), who led the successful charge at Delhi's Kashmiri Gate, but lost his life to a faceless assailant behind what is now a dilapidated Bengali Club in a gali, not far from where Nirad Chaudhuri was to write his Unknown Indian autobiography some ninety years later.

“The story of the Indian Rebellion of 1857 is, perhaps, the most single illustration of our great national character ever yet recorded in the annals of our countryâ€¦”, Sir John William Kaye had written in his celebrated History of the Sepoy War, just eight years after the recapture of Delhi. That classic three-volume work of Empire History began: 'Broken in bodily health, but not enfeebled in spirit, by eight years of anxious toil, beneath an Indian sun, Lord Dalhousie laid down the reins of government and returned to his native country to die'. Contrary to that famous quip in Salman Rushdie's Midnight's Children, “What do the English know of their history, for a great deal of it happened elsewhere”, Kaye was intent on teaching the English their overseas history. Ferdinand Mount has done it again in style a century and a half after Kaye.

Since then both India and Great Britain have moved on. As the author says in the Prologue to his book, 'Such atrocious tales', as the Sunday Times reported of the visiting British Prime Minster (a relation of the author) 'great-grand fatherâ€¦ having participated in a mass hanging of civilians', are 'not exactly news to most Indians, and the country has long moved away from unhappy far-off things'. Yet, both in India and in UK we still tend to remain wistful carriers of our entangled pasts: 'Apne ajdaad ki miraas hain, mazoor hain hum', the great Faiz Ahmad Faiz had hoped unfairly, perhaps, for freedom from the inheritance of such Pasts. The last of the Lows retired in 1905 as Commander-in-chief of the Bombay Army, and on his return was appointed Keeper of the Crown Jewels at the Tower of London. Among the diadems under his protection was the Koh-i-Noor. 'The only part of the “brightest jewel in the crown” that is still in British hands', writes Mount, as he rests his pen, 'is the jewel in the Crown. And the Indians want it back'. A footnote adds the news flash: 'As recently as February 2013, David Cameron refused an Indian request to return it to its original home'. May the Koh-i-Noor rest in peace.