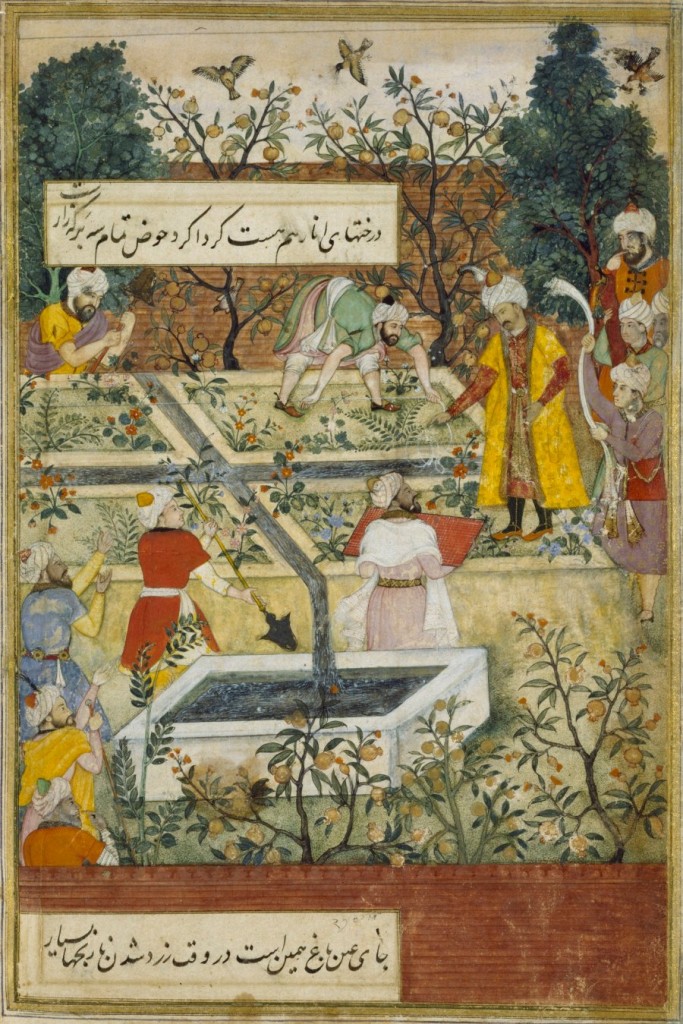 From Baburnama, depicts the Mughal emperor Babur (1483—1530) superintending the laying-out of the Garden of Fidelity at Kabul and planting Anar. By Bishndas and Nanha, ca. 1590.

Anar is pomegranate in Persian. It is one of those fascinating words that travel in space and time: from the Middle East to India through Afghanistan, anar is a word used in Farsi, Kurdish, Dari, Urdu and Hindi.

There is something magic and poetic to the pomegranate: it is a fruit full of symbolic meanings and is present in mythological accounts all across the world. For ancient Romans and Greeks it is the fruit of the underworld; for Christianity it represents resurrection after suffering; in Judaism it is a symbol of fertility and of the Promised Land; in the Qur'an it is mentioned as one of the examples of the beautiful things that God created.

In the last few years, pomegranate has been a constant presence in my life: it strangely became associated to life in a country in conflict as well as to the positive sensations of the small pleasures that make life special.

The taste of pomegranate is connected to vivid and precise memories of places and moments in time.
After her first trip to Palestine, my mother came home fascinated by the discovery of the freshly pressed pomegranate juice. Its unforgettable colour, its rich and thirst-quenching flavour. While talking, we realised that in different points in time, both my mum and I had pomegranate juice at the same stall: in East Jerusalem, in the Old City, just to the right of the Damascus Gate.

In Kurdistan pomegranate is the pride of Halabja — the city that has become the symbol of the Kurdish genocide and claims to have the best anar in the world. The flavour of the pomegranate I had there is, in fact, hard to forget. On top of a hill, in the golden light of sunset, after a visit to the cemetery where the victims of Saddam Hussain's gas attack are buried, with Ayub who worked for the New York Times and told us about the bombs over Baghdad during the Second Gulf War.

And now in Afghanistan, where pomegranate help remember the passing of time, as one of the signs of the changing seasons. When Radio Capital journalist asked me a few days ago what will be the flavour I will miss the most once I will leave Afghanistan I answered: “Pomegranate” without even thinking. I had the first of the season — the special one from Kandahar — talking about the future with Andrea, in the garden of his house in Herat. And again under a pergola in Istalef, a little village nested on the mountains: we picked the fruit from the tree and ate it while looking over the valley suspended in time.

Paraphrasing Marquez. Snow in the time of war.

It started to snow yesterday evening. My first snowfall in Kabul. It started slowly with small flakes that grew bigger through the night until dawn, when the city was entirely covered in white.

This morning I go out early, on my own.

There are very few people on the street. The fresh snow allows me to negotiate my path between the frozen road and the non existing footpaths. The uncertainty of my steps forces me to look down, towards the dirty mix of snow, smog and ice, in search for stability and safety.

It takes me a deep breath and a bit of self control to realise that I am missing out and to lift my eyes off the ground.

And once again the city surprises me with the poetry of its unexpected beauty. What surrounds me pays me back for these efforts.

With my nose upwards and snowflakes on the lenses of my specs: it's all right — I tell myself — even if it takes fifteen minutes to walk five hundred meters and a bit of breathing to fight the fear of slipping and falling: it's all right.

A boy with a green woollen hat smiles and says hello. Salaam, I reply.

It is all so beautiful.

The softened sounds: the magic of silence in a place where the noise of traffic and helicopters dominates the soundscape. The icy embroidery on the naked branches of the trees: a delicate parenthesis in a city scarred by bombs first and by the bad taste of the post war reconstruction later.

A car runs past me sloshing brown snow all over and pulls me out of my reverie. I wonder what army tanks covered in snow may look like, I wonder if the white coat may make them look less scary.
The brown slosh is a powerful coming back to my present: a reminder that is important to think of beauty in relation to its context and that is important not to forget to keep looking around.

Rain, rain. A slow and cold rain. It is supposed to be spring, but it seems it has gone hiding somewhere. The dull grey sky paints an eerie atmosphere that looks like one of Giorgio De Chirico's paintings.

Kabul is strangely beautiful in this light.

Mud softens the sound of our steps, I have the displacing feeling of looking at myself from the outside.

The camera is set on black and white.

Pierce and I walk on the street trying to avoid puddles. It feels like stepping into the Afghan version of a Fellini movie.

Below the hill of Tappeh-ye Maranjan sprawls the whole of Kabul. This is where people go to fly kites on a Friday afternoon. In a makeshift market of improvised stalls, car booths are full of colourful kites and children crouching next to torn rugs balanced between a stone and a puddle sell spools of bright red, blue, green string. There is a cart selling strawberries and one selling popcorn, a cart selling ice cream, one dates and one sunflower seed.
A group of kids with extremely long brooms pointing at the sky run around trying not to trip over the colourful strings.
- What are the brooms for?
- Look over there.
In the kite war, kids use the brooms to get hold of the falling kites — these are the kite runners, bedraggled and with broken shoes. They run and laugh and shout.

A few steps away there is a merry-go-round: a green pole with green arms and small dangling planks of wood. Boys and girls get hold of ropes and planks — when they are all ready, a man grabs one of the arms of the merry-go-round and starts running in circles. Round and round; faster and faster. Feet lift off the ground, legs get a tighter hold of the rope, a hand brushes the ground. Round and round; faster and faster.

A black, menacing cloud surprises us from behind. Rain coms fast. People start running to avoid getting soaked in the storm. We look at each other and smile with a shiver. It is time to go.

A different afternoon, a different hill. The same black and white photos, the same persistent rain.
On Wazir Akbar Khan hill, in the north of the city, there is a swimming pool. Empty but freshly painted, it has three diving boards with bright yellow ladders: a strident contrast to the infinite shades of brown and grey of the city and the sky. Empty, but full of memories: it is rumored that the Taliban used the highest diving board to execute political prisoners. A deadly jump with a stunning view and the city and the mountains as witnesses.

Outside the swimming pool there are reels of razor wire and a military barrack.

A girl walks past eating chips; she has a sailor's hat and a coat of the same shade of blue as the pool.

A few steps and a few puddles away, beyond the soft mud, there are the carcasses of two Soviet tanks; rusty, derelict, abandoned.

We look for the right angle for a photo.

In the background on the top the silhouettes of the diving boards, then the razor wire, the military barrack, the tanks looking over Kabul.

Rain becomes colder. We look at each other and smile with a shiver. It is time to go.

SUMMER: The eye of God. Kabul from above.
Dedicated to T.M.

Earlier this morning I sent him a photo I took last night: three dots — two yellow and one orange — in a black background. This is all my phone could record of the stunning view of Kabul I was surprised with.

“Maybe you should delete it. The one in your mind's will always be brighter.” Comes his response.
It is one of our usual early morning email exchanges. We generally talk about writing and the small, cherished details that life in Kabul offers us: they would be soon transformed into written words. Like the little bird that the guards keep at the entrance of the compound, or the policeman who stops the taxi driver to offer him dates to break the fast during Ramadan.

The last email of this morning's thread ends with these words and no salutation: “Everything in Kabul is caged... the women, the birds, the bookstore, the city itself”. He is referring to his own writings and I can see the expression of his eyes while I read these words — very serious, concerned, almost stern and yet mixed with a glint of excitement for the new discovery — I could hear the intonation of his voice had he spoken them.

As I read his words, my eye fill with last night's breathtaking view of Kabul. A friend invited us for dinner, she had anticipated that the rooftop terrace was what made her fall in love with her new house, she also mentioned that it would be the best place in town to spot the exact location of bombs and attacks as they may happen. I recorded the information without really making sense of it. Until last night.

We climb up the spiral stair case and an immense sky opens over our heads. We are on the seventh floor of a building in the very heart of the city: Kabul surrounds us in all her beauty.
I stand in the wind and turn on my feet, three-hundred-and-sixty degrees, the city is all around me: I feel happy and free and blessed with opportunity to experience a moment like this.

A gigantic orange moon is rising above the hills; I am surprised by the amount of little, dim lights: I was not expecting the hills to be so densely populated. The hills embrace that side of town as a crescent, they look like a necklace full of sparkling precious stones: an unintended homage to the wealth of this country.

There is something peaceful and liberating about the view. Kabul is not a city in a cage, this is a city that secretly hatches hope and the possibility of change. It is a city that is growing, aggressive and resilient, powerful in all the potentials that are yet to be revealed.

Seasons in the Garden of Fidelity | Francesca Recchia | October 04, 2014

[…] This piece was first published in Chapati Mystery […]