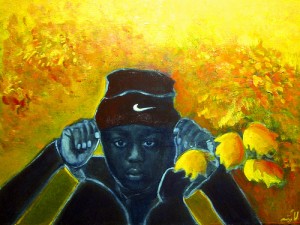 I have a review of Granta's ten years post-9/11 issue up on The Sunday Guardian (New Delhi). When I first wrote my draft, I sent it to Sepoy, because I was worried it was too much of a screed. Sepoy, upon reading it, was disappointed in the lack of screedishness of the review. He had hoped for something more screed-like. Now it is for you to judge, Dear Readers, whether or not this is a piece of screedery. Here's a preview:

Early in the morning on September 11, 2001, I spoke on the phone with a student of mine. After briefly discussing the attacks on the World Trade Center, which had just occurred, he asked, half joking, "will you come visit me at the concentration camp?" He was referring to his religion (Muslim by birth) and his skin color (brown). A couple of days later, a group of female students came to my office. They all wore hijab and were anxious because, they said, their fathers had told them not to wear any head coverings for the time being to avoid hate crimes. They had previously understood their commitment to wearing hijab as an act of pride in their faith that should not be abandoned in the face of ignorance or hate. But should they ignore their fathers? They did.

What do you/sepoy mean by screedishness? I'm guessing you were concerned this was too polemical, while sepoy felt it lacked sufficent edge?

[...] that aid the myopia of empire. Reflections on the 10 years since 9/11 by Sepoy, Farangi, and Lapata delighted CM readers, as did discussions of Imperialism and racism (I, II, [...]