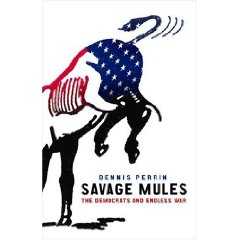 Dennis Perrin, whether he knows it or not, is in contention with Rolling Stone's Matt Taibbi in a contest of nuclear indignance--which of the two will assume the mantle of America's clear-thinking, hyper-independent conscience, left unshouldered since Hunter S. Thompson's slide into obscurity, and lamentable demise?

Taibbi has the lead. He occupies a chair close to Thompson's vacant National Affairs Desk, is a fantastic writer, and seems to get off on speaking truth to, and about, whatever power has the misfortune of catching his gaze. His recent fencing match with Erica Jong will suffice as Exhibit A. Jong meant to teach the young malcontent a lesson about what can, and cannot, be said; in response, Tiabbi handed her a piece of her own considerable ass. Consider, also, Taibbi's furious wood-shedding of The National Review's Byron York, who, following an exchange on the nature of credit-default swap, would do well to never show his smug face in public, or open his mouth in public discourse, again.

Perrin has numerous disadvantages in his quest for a broader audience and the recognition he deserves. His fans must seek out dennisperrin.blogspot.com. Before dennisperrin.com, he blogged under the title Red State Son. Unlike Taibbi, who sits before the camera on Real Time with Bill Maher, Perrin wrote Maher's jokes. Perrin seems to be more comfortable, at least in his role as political commentator, behind a computer-monitor. Perrin's politics, while not explicit--there may not be a good label for them, actually--are a blend of disgust, anarcho-syndicalism, and an absurd comedic sensibility.

One envisions him in a bowler hat, at the turn of the 20th century, gleefully tossing little round, black, crackling-fused bombs at industrialists' motorcades. He may not be sure what follows the revolution, but he's willing to give it a chance.

Savage Mules, Perrin's 2008 catalogue of Democratic party misdeeds, fuck-ups and rank hypocrisy, deserves a broad audience, and when that audience comes to the book, Perrin will win the fans he needs to be competitive with Tiabbi.

Mules is an intensely personal, often jarring history of Perrin's relationship to the narrative driving the Democratic party. It's a story Perrin doesn't buy, even though accident & circumstance often puts him among those who do.

"I've witnessed this up-close and point-blank for much of my adult life. To many of them, the Democrats are a flawed but inherently decent party whose humane outlook is forever compromised by Republican slander and personal insecurity. Even critical liberal bloggers and columnists hand the Dems a pass on most issues simply because they believe that the mules will eventually Get It Right, if only they can move past conservative lies and intimidation tactics."

Carter, Jackson, the Democratic Mascot itself, Roosevelt, Truman, MacArthur, Kennedy, Johnson, Clinton, Humphrey, Nader-Haters, and The Yearly Kos all queue for a clubbing as Perrin, one-by-one, example-by-example, deconstructs the myths with which we surround supposedly well-meaning democrats.

Most of Perrin's complaints have bases in the bloody preservation of American Imperial establishment and expansion, which, by Perrin's reckoning, can be shown first at home with Jackson's genocidal Trail of Tears, and continues unabated, abroad. Perrin's critique echoes Chomsky's common-sensical approach to realpolitik: the assumption that America should husband the world's resources for its benefit, and intervene to protect its "interests" when necessary or expedient, offends Perrin's radically egalitarian ethos. Further, the notion dwells as monstrously and demonstrably in the heads of mules as it does in pachyderms.

It's an admirable stance, and one that forces the reader to take a choice--wake up and do something about the Orwellian mad-elephant, or continue in slumber while Empire thrives. It will be a shockingly difficult choice for most readers, and one that most are wholly unprepared to consider. The assumption that America is good, and its Democrats are good stewards, and that American use of force is not just necessary, but an unqualified good, are so taken for granted that they might as well be scrimshawed in ivory.

And this is where Perrin distinguishes himself. Perrin does not come from a beat--he is a free agent, a gunslinger, whose loneliness in the wilderness permits him to take his critique a step further than he might, were he wed to a masthead. He does not report on the process, nor does he take its permanence, or its value, as givens that needn't be proved by argument. Perrin's exchange with Max Blumenthal's aunt, at the YearlyKos gives an illustration:

"Do you like Hillary?" She asked.
"No, not really."
"Why not?"
"It's probably best not to go into it here." I didn't want to start a conversation about how much I dislike the Dems with someone from the Blumenthal clan, especially right before I was due to speak.
"Well, who do you like?"
"Actually, I'd like to see another system."
"Well, that's not gonna happen."
Not with people like you in the way, I thought to myself.

Perrin's descriptions of his confusion, humility and ambivalence following September 11th come off as particularly endearing, and provide a nice literary counterbalance to the overall tone of the book, which, despite its being earned, can seem unrelenting, like the rare car alarm that has actually been set off by a thief.

The contest between Taibbi and Perrin--of which neither likely has intention nor knowledge--may take years to resolve, if ever. But so long as Perrin continues roasting sacred animals, and literally kicking high-rolling apparatchiks' asses, he should count himself, and we also should count him, among our treasures. A rare thing in these times, truth. And a rarer thing is one who will tell it, as he sees it, and challenge those who disbelieve to prove him wrong.

Dennis is alright and all, don't get me wrong, but Monsieur IOZ kicks the entire Internet's ass.

I'm not one to argue with "our" mr. fun! Thanks for the review and links, kind Steve sir. I've added you to my "new favorites" list, for what it's worth. We can use all the saner, soberer(?) voices we can find on the Internets in the coming months. Judging from what Kuntsler, Arthur, et. al. have had to say recently, it's going to be a long, cold, lonely winter. Levity is certainly one way to fight the coming coronation, and it's attendant intolerance of alternative voices to the Big Dem narrative. Keep up the good work!

Dennis is the new Hunter Thompson.. He tells it like it is. Also he has paid (and still paying) his dues. IOZ and Tiabbi come off as a bit too smart ass and smug. Dennis is honest! If you read his experience of going from being on CNN to cleaning office buildings.. it is right up there with stuff that Hunter T experienced and felt when describing the 72 democratic convention Both did it with a clear eye towards the system.. Yes i'd like to see another system as well and it will only happen if more people see the truth that dennis calmly catalogues in his writings.. No shouting, no trying to be cool.. he just just lays it out there in it's bare nakedness

this was a useful post (it's always good to hear again how rotten the Democrats are!) but by couching it in terms of a "contest between Taibbi and Perrin" you might take the reader's attention away from the main point, which is Perrin's total and accurate skewering of the Democratic Party.

I add Billmon to this list. He is my favorite for taking a clear eyed look at sacred icons