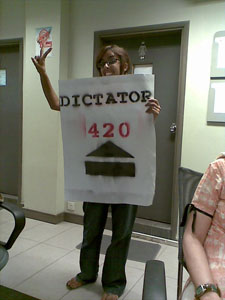 The General's crackdown on media involves the key "code of conduct" which prohibits making fun of His Enlightened Excellency. It is a healthy decree - no society can survive if its Elders are Targeted by Base Humor. Perhaps it was after his trip to the Daily Show with Jon Stewart, where he was treated with deference and respect, that He Who Is Pakistan decided that the Pakistanis need to grow up.

Sadly, kids at 4 Man Show have not learned their lesson. In the guise of exaggerated humility and compliance, they continue to mock him. Ruthlessly. ("Sab Theek Hai. Everything is fine in Pakistan. I saw with my own eyes, the lion and the lamb drinking water from the pond outside. All is just fine in Pakistan. Diamonds are being sold on the street like peas.")

It is hilarious. I urge you not to see it. See an earlier post on the show.

[vid via pkpolitics.com. thx to Huma for the image]

[...] other things, the Emergency provokes some people to make fun of Pervez Musharraf. More at Chapati Mystery. Share [...]

Did CM ever post an explaination of the poster symbol? I think it is the Supreme Court. Musharraf's shoe just landed on it, realized that he cant afford the rent, so he upturned the entire Monopoly board. BTY Diamonds are selling like garbanzo beans, not peas. Please use standard Mexican-American English.

You mean the Eject symbol? I think it is trÃ©s retro-agitprop chic. Kudos to whoever came up w/ it. And I wrote "chickpea" and deleted it thinking no one would know what that is. Good call on garbanzo.

This clip is hilarious! Might be the striking daily show writers are moonlighting for Aaj?

i like that poster: "have you ever subverted democracy through a childish tantrum that threw out a supreme court that was going to follow the law and rule against your continued power-grabbing, declared emergency law, locked up anybody that dared to freely and peacefully assemble against you, and be so sensitive as to punish harshly anyone trying to mock you....... on weed?"

Hilarious. Keep up the good work!

tsk: I thought we talked about this a while back. 420 in Lahore ain't the same as 420 in OC. Your point, though, applies - if I know anything about student activists.....

Dodging media curbs from above and below « Kafr al-Hanadwa | November 23, 2007

Damn but the trÃ©s retro-agitprop chic brings back memories. V interesting to see how the trends & tactics of global activist movements from range of issue-areas are getting reworked & applied here--from the snarky-ass signs to the spraypaint to the teenagers with taped mouths (the last of which being so often associated with "pro-life" crazies). I'll be inducing somebody to translate that clip for me soon, btw. Accessory to sedition! (We like chickpeas better than diamonds anyhow.) BTW we are planning another event, focusing on media. Details to be sent out forthwith.