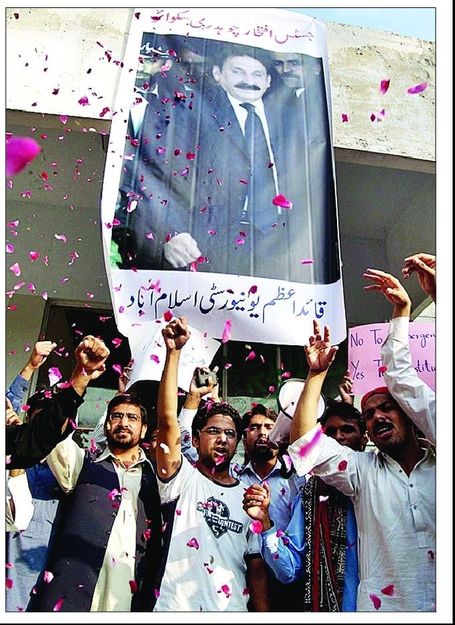 "Mentally and in my heart, I am not a dictator. In my heart, I have introduced democracy," appeals The General during a recent sit-down with Sky News. The proof? He was not a dictator when he was commanding the army. The mind boggles at the logical contradiction buried in there. (Try imagining a democratic army). But, I am giving him too much credit if I say he is contradicting himself. He is lying. There is news that he has arrested key members of the leadership of Pakistan People's Party in Punjab including Abida Hussain, Pakistan's former ambassador to Washington. Democratic, no?

I went to the sneak preview of Persepolis - based on Marjane Satrapi's comic book (see this for background). It is a poignant film - amazing 2d illustrations, perhaps some of the best music I have heard in a movie recently, and lots of "applicability to our current situations" (as I heard one sage describe it on the way out). The story takes place immediately before the 1979 Islamic Revolution in Iran and follows Marjane through the early 90s. Especially notable is the nuanced portrayal of a child growing up and learning what it means to know who she is and how to live with integrity. History and memory weigh heavy on Satrapi, though I am sure she will flick her burning cigarette into my eye for such academic l33t speech. I also know that Satrapi did not write this to "explain" the Islamic Revolution or life under the Mullahs in Iran to the United States at the moment we are actively contemplating "liberating" that nation from its suicidal regime. But that is how the US media will see this movie. I predict lots of reviews about how factual or authentic the description of life under Islamic regime is; how she is an apologist for the mullahs or handmaiden to the Great Satan etc. etc. There is no denying that this movie is grist for the hard news-wallah's mill.

Nicholas Schmidle, reporting in TNR compares Musharraf and the Shah in Iran - with the backdrop of US support of a dictator. The comparison is mostly facile and the fear is not a new one. General Zia ul Haq thought as much in the immediate aftermath and went on to inject his Sunnification policies into the Pakistani bloodstream (often mislabeled 'Islamization'). The Iranian example does provide one crucial point to ponder: the role of the cultural intelligentsia and their ability to know and predict what is going on in their own country. We are focused on the middle class and the youth but we need to guage where the country's over all mood is tilting towards. Let us not get carried away and forget that two of the biggest states in Pakistan are effectively ungovernable by the Federal regime; that an incredibly ruthless adversary is currently operating in Swat; that the people of Baluchistan have long awaited justice and that the Pakistani people are just as scared and helpless to control the direction of their country as we have been in this country. I am hopeful that Musharraf and his uniform and his throne will part soon enough but we need to know what happens next.

In the meantime, we can take heart from Schmidle. After all, it did take two years of hanging out with nastiest Islamists around before he got spooked from anti-Americanism:

At least, not yet. After living in Pakistan for almost two years and traveling to all parts of the country meeting some of the nastiest Islamists around, I had my first encounter with visceral anti-Americanism on Saturday night, an hour after the State of Emergency was declared. I was walking from one side of a police cordon, back into a crowd of anti-Musharraf protesters, when a tall man with a long beard called out from 15 feet away, berating me and accusing me of being a CIA agent. "America is destroying a nation of one hundred and sixty million people to save one person!" he yelled.

I looked back at the line of riot police and wondered if they were going to come to my rescue. But I didn't fault the man with the beard; even though the White House has criticized Musharraf in the last few days, they have spent the past six years telling Musharraf that he could do no wrong. I just wondered how many American journalists faced a similar barrage in the months before the Shah fled Iran.

In some earlier post I mentioned Zakaria and his particular brand of "realism". He now demands our attention with Pakistan's Pinstripe Revolution. Pinstripe? The analysis is so off-base that it screams for a proper fisking - for which I have no energy. Can I just say that when so-called "liberal pundits" are proclaiming "Periods of transition are never placid" a la Donald Rumsfeld than we really need to re-assess the meaning of the word "liberal". The meaning of the word "pundit" thankfully should remain what it is.

Imran Khan finally came out - went to Punjab University - and was tossed un-ceremoniously into the hands of the police by the members of the IJT (student wing of the Jama'at-i Islami, the hardline mullahs). Imran Khan needs to be released, now. He has justifiable fears for his safety. 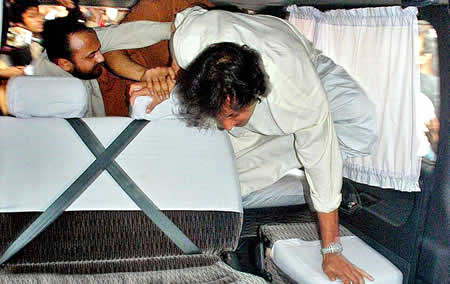 OK just this once. I'll take Zakaria out for a little tour of the drawing room, and then hog tie him to Thomas Friedman. BTW, anyone have theories about why JI would help Musharraf hunt down Imran. Qazi sahib was just calling Muharraf a traitor. Jawad

Jawad; you do not need theories about Imran Khan arrest and JI role. JI is part of MMA which stands for Mullah Nilitary Alliance in Pakistani Political language.

“Mentally and in my heart, I am not a dictator. In my heart, I have introduced democracy,” That is such a Bush line. Makes me wonder if Musharaff is the test case....

There's anti-Americanism, and then there's anti-Americanism, if that makes sense. In an earlier thread, I was chided for saying Pakstan has been America's puppet for years. We may disagree on the extent, but I think most in Pakistan and here agree that America has done its part to make the current situation what it is today. The U.S. is the one that helped fund the Musharraf regime (all for fighting terrorists, of course), and helped to enbolden the Taliban during the Cold War. That the consequences may have been unexpected is another matter. The U.S. never seems to understand there is a chain reaction to its decisions and actions. But I don't see that as anti-Americanism. I see that as stating facts. Of course, all this can lead to anti-Americanism, which is why world leaders must be careful about who they decide to get into bed with.

I just want to see that all educated people need to stand up against Musharaff and all the supporters of dictatorship....we are in 21St centutry, no one can oppress us any more...I am sure we will get our real freedom very soon

Hi guys ..... im Musa from Karachi PAKISTAN .... about the JI's role in detaining Imran khan.... most of the JI leaders have condenmed it ... but there are indications that there were some other elements that were involved in the arrest .... i disagree with akbars view ..... JI will not do such a thing .... and just so that u know .... these student bodies are pretty much independent .... i dont see y QAZI sahab would invite him and get him kicked out ..... Hafeez paracha of JI indicated that there were some intelligence personal amongst the crowd and some plain clothes men with some JI students who carried this out !!!!!

Everyone needs to unite and rally together to demand the release of Imran, lawyers, human rights activists and everyone who has been thrown into jail for standing up for justice. They were brave enough to speak out and fight for it and us. Now it is our turn to fight for them, have peaceful rallies, not just in Pakistan, but in UK and US, to put the current regime under pressure.

Re .. i disagree with akbars view Dear Musa, I hope I am wrong and all the leaders and public representatives can sit together and agree on a formula that meets needs and interests of people of all four probinces and keep arm and Beurocracy to their assigned constitutional duties. However there is a long history backing my observation about JI, to highlight a few wxamples 1) When Yahya started military action in East Pakistan, JI AND ijt' Badr FORCES WERE HELPING MILITARY BRUTALIZE bENGALIS 2) When Zia imposed Martial Law, JI from PNA platform accepted Ministerships and were parteners in ZIA's crimes 3) Whrn Musharraf needed cover from Parliment, MMA helped him pass 17th amendment, the fruit of which we all are tasting now I am still willing to give them benefit of doubt, but I am not overtly optimistic. My first hand experince with IJT WAS DURING MY YEARS AT kING Edward Medical college from 1981-1987, It was a brutal Fascist organization operating in Lahore at that time. I feel Imran was lucky to emerge alive and not tortured and dead from their custody, but again time may have changed regards

@cc: yeah, i'm sorry about that. my comment was made in the midst of a vicious hangover and i basically vented my spleen in an entirely inappropriate way all over sepoy's forum. what i meant was something akin to: his position of power is buttressed by US money and arms, but i find it hard to believe he's taking orders from directly from washington, which is how i read your comment. kind of like giving somebody a sports car and then being blamed for his speeding ticket. "he's the guy behind the wheel" vs. "what did you think he was going to do with it?"