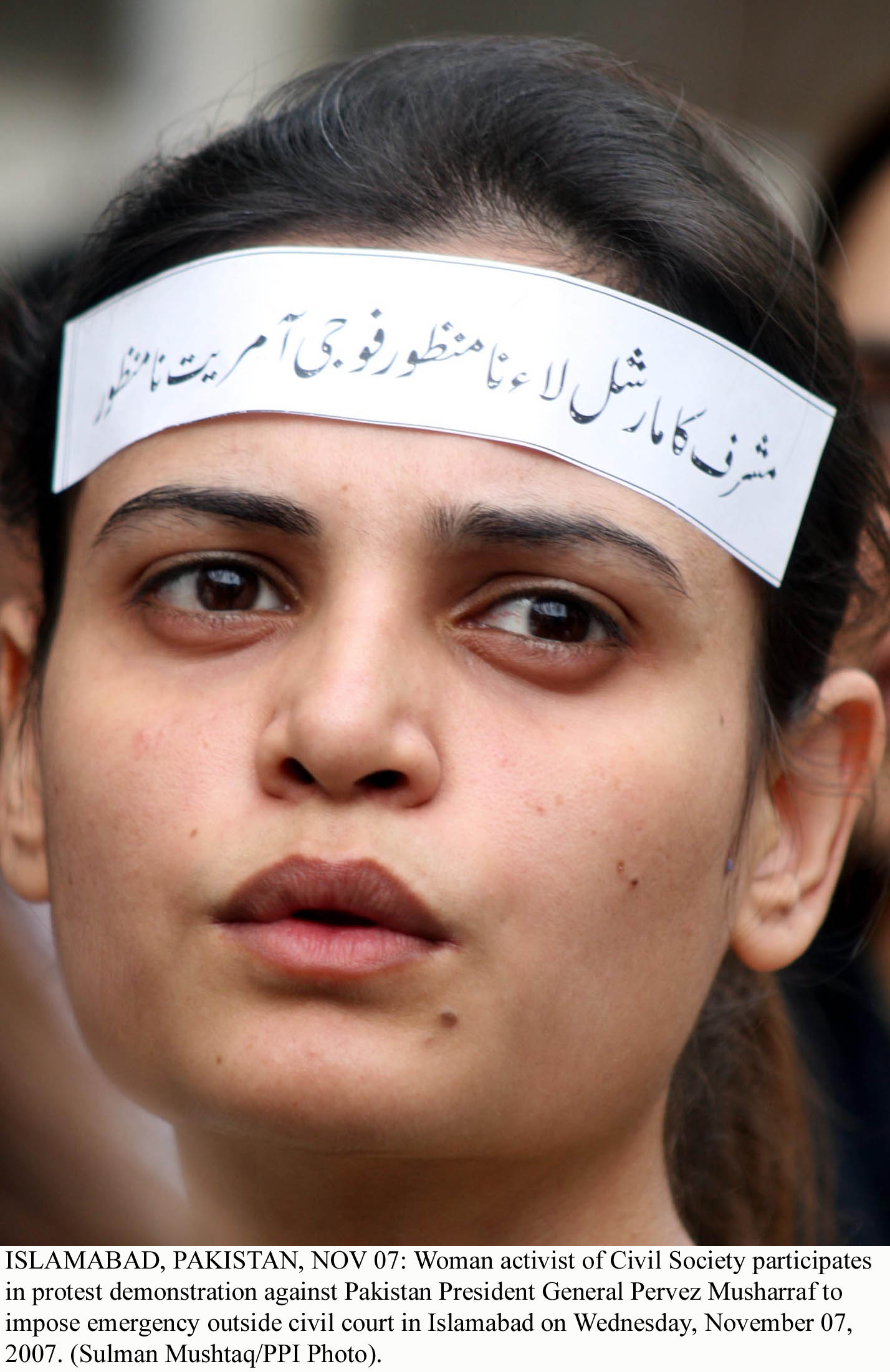 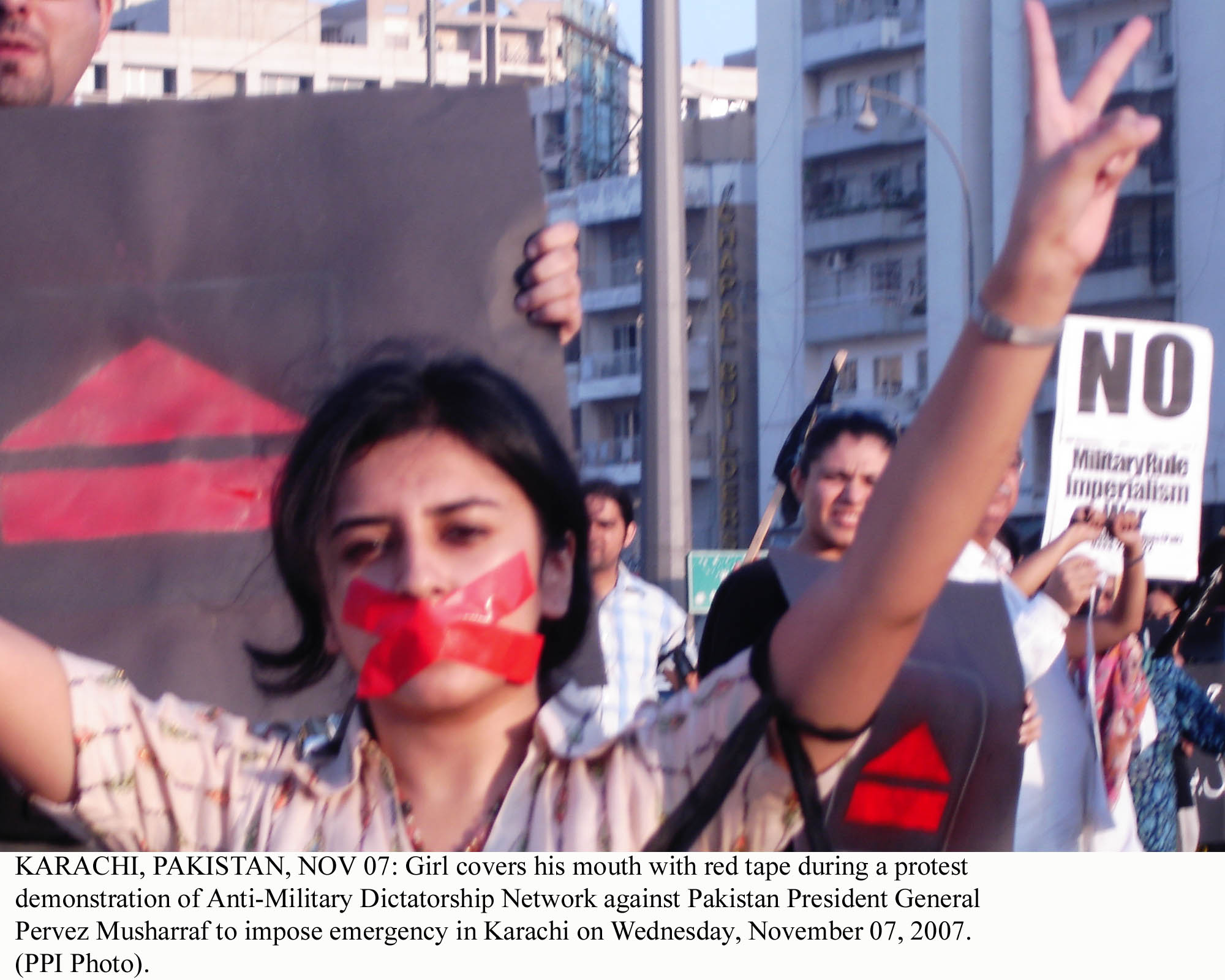 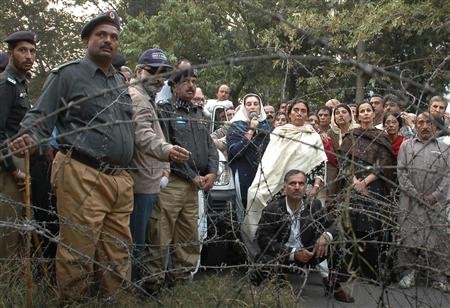 Bibi/Pinky was put under house arrest and then released. I think BG has it about right.

This is a political shadow play. Many Pakistanis know that Bhutto's family and entourage presided over egregiously corrupt and incompetent governments, and that Musharraf's military cronies have been placed in key business sinecures from which they control a large swath of Pakistan's economy.

Amid all this intrigue, the current prime minister, the apolitical former Citibank executive Shaukat Aziz, has fostered stunning economic growth in the last few years, without the corruption of his predecessors. His stewardship comes much closer to the ideals of competence, transparency, and accountability than to Bhutto's penchant for feudal privilege or Musharraf's for Napoleonic authoritarianism. Whatever the outcome of the Bhutto-Musharraf shadow play, Pakistan needs the kind of good governance it has had from Aziz.

Flash mobs are not what you may think they are.

A drastic increase in non-security aid, guaranteed for a long period, would help persuade Pakistan's people that America is an all-weather friend -- and Pakistan's leaders that America is a reliable ally. Pakistanis suspect our support is purely tactical. They point to the aid cut-off that followed the fall of the Soviet Union to our refusal to deliver or refund purchased jets in the 1990s and to our blossoming relationship with rival India. Many Pakistanis believe that the moment Osama bin Laden is gone, U.S. interest will go with him.

When U.S. aid makes a real difference in people's lives, the results are powerful. In October 2005, after a devastating earthquake, American military helicopters delivering relief did far more to improve relations than any amount of arms sales or debt rescheduling. And the Mobile Army Surgery Hospital we left behind is a daily reminder that America cares.

To have a real impact on a nation of 165 million, we'll have to raise our spending dramatically. A baseline of $1.5 billion annually, for a decade, is a reasonable place to start. That might sound like a lot -- but it's about what we spend every week in Iraq. Conditioning security aid -- now about three-quarters of our package -- would help push the Pakistani military to finally crush Al Qaeda and the Taliban.

Aid to the Pakistani people should be unconditioned -- that is, not subject to the ups and downs of a particular government in Islamabad or Washington. But aid to the Pakistani military and intelligence service should be closely conditioned -- that is, carefully calibrated to results. Like it or not, the Pakistani security services will remain vital players -- and our best shot at finding Bin Laden and shutting down the Taliban. Their performance has been decidedly mixed: we've caught more terrorists in Pakistan than in any other country -- but $10 billion later, Pakistan remains the central base of Al Qaeda operations. We must strike a much better bargain.

Getting Away with farce by Ayaz Amir: THIS is unsustainable and cannot last. You can't mock the heavens and think there will be nothing to pay for it. These are the acts of desperate men who know that their moment in the sun is up, from whose fingers power is slipping but who want to stave off the inevitable.

Open Society Institute is hosting a forum on the Emergency with Asma Jahangir (on phone), Ayesha Jalal and CM friend Anil Kalhan (and others) on Nov 14th at 9:00 am in NYC. They will even give you breakfast if you show up. RSVP. I wish I could attend but if you do, tell me about it.

Happy Diwali, to all my gentle readers. Go light some fire-crackers but not in Southern California, please.

America has always had it wrong on Pakistan because Pakistan has never been sure what it wanted from America.

"... Musharraf's military cronies have been placed in key business sinecures from which they control a large swath of Pakistan's economy." BG is telling half truth at the best.I may agree with BB(Noora Kushti) part buT Shaukat Aziz has been one of Musharraf's civilian crony (as you know BB had no say in Govt for last 10 and half years, SHARED BY nAWAZ AND mUSHARRAF in decision making) He was summoned from new york and put in as PM by Military. His achievements , 1)Unprecedented KSE crash and he pull the plug on investigation 2)Sugar scandal and no accountability 3)Trying to sell Pakistan steel Mills to his ex-clients and hence supreme court chief justice'S suo moto action to stop that plundering , leading to SCJ 's dismisal in March and rest is history. May be Boston Globe editors are feeling benefits of his sound policies in Boston but it would be better to ask some Pakistanies living in Pakistan. finally for some fun http://www.youtube.com/watch?v=p8BbbjMVtmo http://www.youtube.com/watch?v=zM1CzT6L0n8

The Boston Globe article certainly is a bit of a whitewash. Firstly, about Shaukat Aziz being non-corrupt: 1. Refer to Hasan Abbas' book "Pakistan's Drift Into Extremism". Abbas, a former NAB (National Accountability Bureau) member maintains that it was Aziz who convinced Musharaf to kill investigations into several of his business friends - maintaining that it would hurt economic growth to go after such major players in the economy. 2. The Pakistan Steel Mills sale in which Aziz is alleged to have received kickbacks. PSM was sold for less than 50% of ITS LAND VALUE ALONE. Incidentally, it was the now defunct Supreme Court that intervened and killed the sale and ordered an investigation. 3. The Stock Market crash which was widely seen to have been rigged and in which several major brokerage houses made millions. The FBI was called in and it was found that "computer errors" had conveniently wiped out these houses' transactions. Once again, people called in favours and Aziz killed the investigation. 4. The Roosevelt Hotel in NY, owned by PIA, was estimated to have a market value of close to a billion dollars. A consortium including Aziz's former employers received a contract to advise in the sale and they accepted on behalf of PIA a bid of $400 million. The sale was halted by PIA's board of directors citing a lack of transparency and fiscal propriety. Incidentally, the consortium, which received Rs. 4.1 million for this worthless advice, itself was not the lowest bidder for the contract (which was Deutsche Bank). So why is there this impression that Shaukat Aziz is 'clean'? This article gives some hints: http://www.dawn.com/2007/08/27/ed.htm

The second aspect of the BG article was that Shaukat Aziz has "fostered stunning growth" in the economy. Now, lets put aside the question of to what extent Aziz and his polices actively fostered this growth, or merely passively witnessed it. Firstly, this growth has been jobless growth. The unemployment rate has not benefited from it. Futhermore, it has been outstripped by inflation every year since Musharaf has been in power. This has had a telling effect on the lowest income stratas. For the vast bulk of the population, they are worse off now than they were 10 years ago. Secondly, even lending agencies that traditionally espouse growth driven, "neo-liberal" economic polices have been very critical of this government's record in poverty reduction and the social sector generally. A recent World Bank report, for example, was outspoken on this front. And as a recent ADB report stated, in most social indicators, Pakistan is now worse off than its South Asian neighbours. http://www.dawn.com.pk/2007/11/05/top16.htm

Thanks for this. I knew CM would be the place to follow the latest on the situation in Pakistan. By the way, am I the only one who noticed Thomas Friedman's bizarre and ignorant attempt to suggest in his latest column that Pakistan's "meltdown"--versus India's success--is the fact that they didn't have an emperor Akbar?! The more I read this column, the more it pisses me off. Friedman writes: "I just returned from India, which just celebrated 60 years of democracy. Pakistan, right next door, is melting down. Yet, they are basically the same people â€” they look alike, they eat the same food, they dress alike. But there is one overriding difference: India has a culture of diversity. India is now celebrating 60 years of democracy precisely because it is also celebrating millennia of diversity, including centuries of Muslim rule. Nayan Chanda, author of a delightful new book on globalization titled “Bound Together: How Traders, Preachers, Adventurers, and Warriors Shaped Globalization,” recounts the role of all these characters in connecting our world. He notes: 'The Muslim Emperor Akbar, who ruled India in the 16th century at the pinnacle of the Mughal Empire, had Christians, Hindus, Jain and Zoroastrians in his court. Many of his senior officials were Hindus. On his deathbed, Jesuit priests tried to convert him, but he refused. Here was a man who knew who he was, yet he had respect for all religions. Nehru, a Hindu and India's first prime minister, was a great admirer of Akbar.' Akbar wasn't just tolerant. He was embracing of other faiths and ideas, which is why his empire was probably the most powerful in Indian history. Pakistan, which has as much human talent as India, could use an Akbar. Ditto the Arab world."

Thomas Friedman is nothing if not tiresome. And almost always wrong. Also, someone get those protesters a literary agent. One of them could be the next Arundhati Roy.

For their looks or for what they have pasted on their foreheads, Lapata? (I can't read the urdu writing, so cannot say if it is worthy of a hefty advance). Friedman needs a basic South Asian history survey course. Sepoy, after reading his idiotic excerpt in the comment above, I am now rapidly revising my 5-people-to-have-a-drink-with list from last weekend. Who were the losers you had suggested?

lapata: I find this thread highly objectionable. These brave girls are not doing this to advance any prurient interests in their striking good looks. dk: I would love to have a drink w/ Friedman since it will give me the only opportunity I will ever have of pouring a full glass of hoppy IPA on his head. Maybe that will help wake him up.

You are right, sepoy. I think maybe I was temporarily possessed by the spirit of Norman Mailer. But he's gone now, probably to pour a glass of IPA over Thomas Friedman's head and stab him with a pen knife.