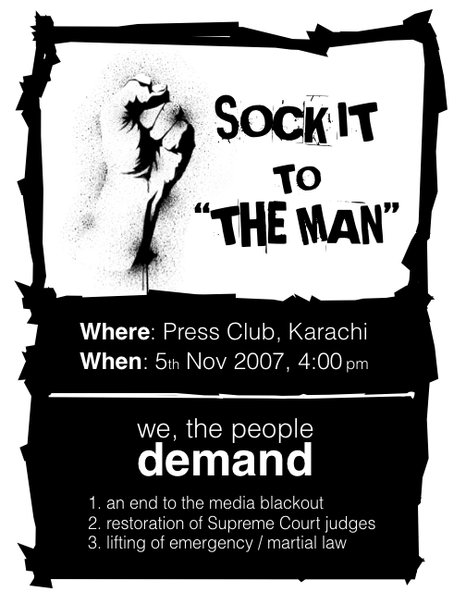 Protests are being planned - most notably in New York/Karachi/Lahore and on Nov 7th in London/Paris/Lahore/etc. Of course, it goes without saying that those walking in the streets in Lahore or Karachi will most likely risk their immediate safety and freedom. I wish I could walk with them.

And a word from Habib Jalib:

If the Watchman had not helped the Dacoit
Today our feet wouldn't be in chains, our victory not defeat
Wrap your turbans around your neck, crawl on your bellies
Once on top, it is hard to bring down, the jackbooted state.

The code of conduct for media has finally been issued by the General. Highlights:

(j) not broadcast video footage of suicide bombers, terrorists, bodies of victims of terrorism, statements and pronouncements of militants and extremist elements and any other act which may, in any way, promote, aid or abet terrorists activities or terrorism;

(k) ensure that no anchor person, moderator or host propagates any opinion or acts in any manner prejudicial to the ideology of Pakistan or sovereignty, integrity or security of Pakistan.

(l) not broadcast any programme inciting violence or hatred or any action prejudicial to maintenance of law and order;

(m) not broadcast anything which defames or brings into ridicule the Head of State, or members of the armed forces, or executive, legislative or judicial organs of the state;

Basically, it comes down to a don't-mock-me law. This is probably ok, though. Most of the media is still blacked out. YouTube is also a good place to get random news feeds - such as these street interviews.

They tried to arrest Imran Khan but he, um, escaped ... here is why it was probably a good idea not to get arrested.

I'm actually curious about something in the strictures above: he refers to the "ideology of Pakistan" but I'm not aware of any specific national doctrine..... What, if anything other than General-worship, is Pakistanianism?

The ideology of Pakistan is a time-honored, sacrosanct belief that Pakistan was established as a separate homeland for Muslims of India who are historically, culturally, and of course religiously separate from the Hindus. Threats against the ideology, in the context above, would be things like questioning whether the Partition was a good idea or agitating for some sort of union/pan South Asian spirit etc. etc.

Ah, yes. That would be giving aid and comfort to Islamic extremists and anti-democratic forces, I can see that now. What's a good result, at this point? How does Pakistan come through this?

Jonathan Dresner you have described it so well, its exactly that General-worship phenomenan. You know it's like a military with a country rather then a country with a military. And remember that dictatorship needs extremists and extremists needs dictatorship, dictatorshipe needs these fanatic-extremists to justify there illegitimate rule and extremist needs dictatorship to prosper as they have never prospered in this history of this country as they did in General-Zia and now General Musaharraf time. Never in the history of Pakistan the religious parties secured more then 5% of the vote in elections (in 1997 general elections only 1 member of these religious parties was elected to a 100 member assembly of Frontier Province) unless under the kind hand/supervision of dictatorship wherein they were given the blessng of forming a government in Frontier Province which is being projected as extremly religious and extremist society but one finds the relity when u visit and spend some time in that society that these extremist forms hardly 5% of that province/society's and are obiously being funded from outside wheras the vast majority of that society are moderate and even secular.

Actually, under the classic 'ideology of Pakistan', Muslim fundamentalism makes perfect sense - it was actually 'solidified' as an actual term and made sacrosanct under Zia ul Haq. Any agitation against his Islamization programme came afoul of this 'ideology of Pakistan'. Thus it has also always been strategically deployed against _secular_ politics, implying (and often directly stating) that their secular politics was actually against the ideology of Pakistan because it undermined the justification for Partition from India, and so was a 'pro-India' move. This is very different, but the seeds of the 'ideology of Pakistan', and hence the state, being collapsed into the head of state was laid very early on and made more complete under Zia.

What do you think of Najam Sethi and his Paper Daily Times? I read the editorial today, he seems to be supporting Musharraf coup.He criticized opposition figures for being irresponsible.

Withholding 'aid' isnt such a bad thing in the long term, for everyones benefit. Thankyou Mushy for introducing me to the word malafide. Duas that it's not the end of the world and the people get through to the other side in tact. I might check out the london protest to see what kinds of people show up.