This trip had, what learned call, serendipity flowing through the pores. One such serendipitous moment resulted in my encounter with the Resettling the Indus project. A group of architects, media and finance specialists, wise fools gathered to help raise funds and resources during the greatest natural disaster in Pakistan last year - the floods. However, even as we (the world) has mostly forgotten and moved on, they are continuing to work in the area, rebuilding the villages and sites swept away by the flood.

Let me pause here to tell you that this post is to raise funds for this project. A project that I can genuinely say deserves every little dime you can spare plus some. I have rarely endorsed/raised money here but you can trust me that this will help people.

As Hyder Ibrahim explained to me the philosophy and genesis of the project, I couldn't help but marvel at the directness and clarity with which RtIndus approached NGO-style work and engaged the "locals".

The most major impact on any affected of any kind of a natural disaster is psychological displacement. This is equally true for the victims of the Pakistan Floods of 2010. Their houses have been washed away or damaged beyond repair; their sources of incomes have been destroyed (in the form of crop or livestock); their lives have been put on a sudden hold. Any kind of rehabilitative work that is carried out for them needs to address the psychological impacts on their lives. Displacement, in physical form or even culturally, may not affect them in the short term; as a matter of fact, they might welcome any kind of rehabilitative work that is 'offered' to them as a privilege. In the long run, however, it will cause an unforeseen shift in their lifestyles to which they may or may not be able to cope with.

Architecturally speaking, people who have lived in mud houses for generations will be satisfied to be living in a brick or concrete house, but in the long run, will they have the resources to maintain these houses? Who will pay for the maintenance of these houses? 'Aid' will be not always be flowing in for them. They need to be given solutions that they can sustain, long after the aid is gone. Mud (or any other local material) is readily available in these areas, and will always be. Why give them an infrastructure, which they will not be able to afford? Why give them an infrastructure that they are not used to culturally, socially and financially?

It is utterly impractical, and insensitive, for any organization to pick up a project that promises more and delivers less. The approach to this disaster should be delivering more by promising them less — in a way that requires the participation of the local population in the reconstruction process.

This might seem like an unsympathetic approach to their vows, but one that understands the overall implications. It is imperative, in our view, that the people affected by this natural disaster are involved in the process of rehabilitation, so that they are a vital part of putting their own lives and their communities back together again. This will not only instill a sense of ownership in them, it will give them a chance to be a part of rebuilding their own lives. Maybe the only opportunity in this disaster is to help these people rise beyond their current states of mind about not being 'able' enough and actually be able to be agents of change in their own lives.

From that starting point, they built a site-specific philosophy: 1. Involve the local afflicted population in the cleaning up process; 2. Teach them the skills necessary to design and construct their own houses. 3. Use common sense, long-existing social and cultural knowledges, work.

It is that crucial step - building in the community the capacity to produce their own rehabilitation which makes this project so worth your support. The RtIndus folks even designed their own brick making machine (the brick-producing industry is a serious roadblock to most such efforts - and usually the greatest money-sink). Their invention, Bhatta Jr., made bricks on site. 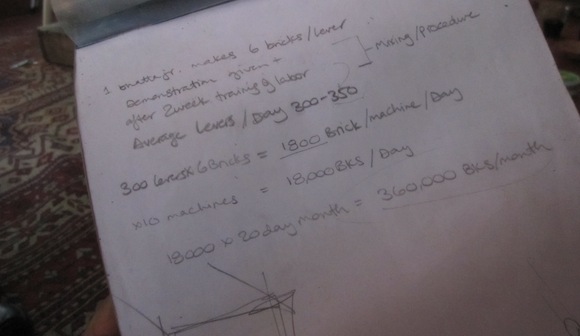 From that philosophy, with that tool, and using the skills of their varied but specialized backgrounds, RtIndus began training and rebuilding - first a community center (mosque, dispensary etc) and then houses. Look at these photos.

This is, quite honestly, the best applied knowledge I have encountered. In another heartbeat, I would be working with them.

This entire project is funded either through private funds or through donations. There are narratives about the post-Flood global aid here but we will go over them some other time. For now: You can donate, and you must donate, to them via Western Union to their account information:

It is fairly impossible to send money to PAKISTAN but you can go to your bank and do a wire transfer using that Swift Code above.

Alternatively, you can PayPal me the money (Paypal Account: manan@uchicago.edu) and I will total and forward all donations after a let's say April 30th.

[...] Mystery introduces the ‘Resettling the Indus' project, which is an initiative of professionals from Pakistan [...]

What a great idea! It demonstrates the promise of multidisciplinary collaboration. Can you ask these guys to create a project on global giving? PayPal doesn't work everywhere, and swift transfers are usually not quite that swift. Do they accept credit card based donations?

[...] course, Resettling the Indus had already gotten the coveted Chapati Mystery endorsement, who gave us this bit of language from RtI’s facebook page: Architecturally speaking, people [...]

[...] that I hope to find here. Umair Javed has pointed this direction along a project that Ahmed brought up earlier, but so far this has also rather ‘only’ been endorsement, no critical approach. [...]