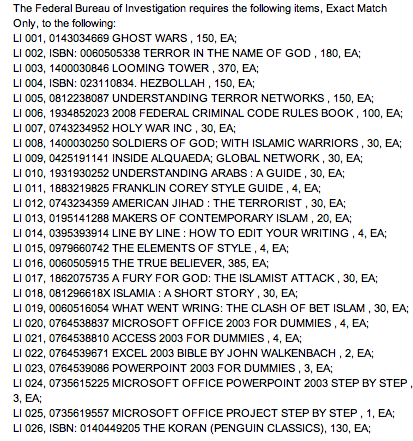 Looking over the list (love that Excel Bible), I can't help but think that any of the books mentioned in this older Middle East Greatest Hits list would be a far better choice.

ps. Only 30 copies of "Understanding Arabs: A Guide For Modern Times"? After all it has such excellent analysis (p. 57-58):

Among Arabs time is not as fixed and rigidly segmented as it tends to be among Westerners. It flows from past to present to future, and Arabs flow with it.
...
The Arabic word (and sentence) Ma'alish represents an entire way of looking at life and its frustrations. It means "Never mind" or "It doesn't matter" or "Excuse me - it's not that serious." You will hear this said frequently when someone has had a delay, a disappointment, or an unfortunate experience. Rather than give in to pointless anger, Arabs often react to impersonally caused adversity with resignation and, to some extent, an acceptance of their fate.
...
Initial reactions by your Arab counterparts to your suggestions, ideas and proposals can be quite misleading if taken at face value. Arabs are not likely to criticize openly but are more likely to hint that changes are needed or to give more subtle indications that the proposal is unacceptable - by inaction, for instance.

If only Iraq was an impersonally caused adversity.... 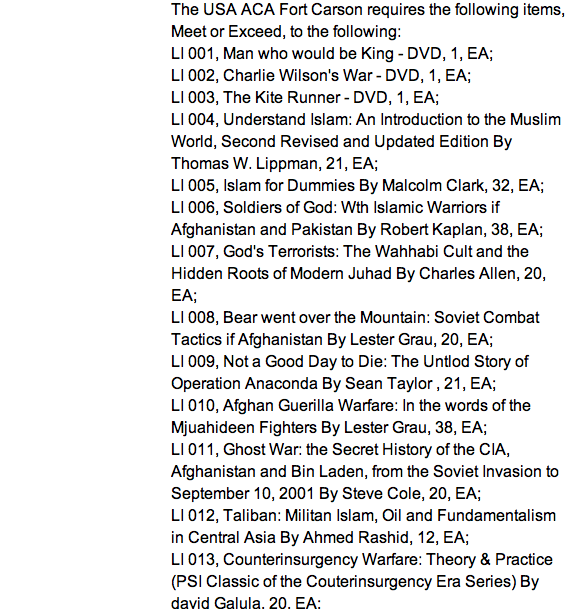 Also noteworthy is the exclusive inclusion of The Koran (Penguin) the least non-partisan translation.

Another interesting thing is the typos. Notice "Islamia: A Short Story"? I was getting frothy imagining a rich socio-cultural vignette set in Afghanistan or Saudi, with star-crossed lovers where the man goes to fight the Jihad against the wishes of his sassy, west-loving beloved. You know, "Hills like White Elephants" meets al-Jazeera. Ah, no such luck, put in that ISBN in amazon and you just get Karen Armstrong's "Islam: A Short HISTORY"...how boring. Aren't they supposed to know Islam 101 by now? Oh, and 370 copies of Looming Tower? What, are the FBI in bed with the New Yorker now? No wonder Seymour Hersh keeps getting high level leaks,

I know we discussed this before, but I want to paste it here for posterity's sake:

This is notice that Naval Special Warfare Group One, San Diego, Ca. intends to award a sole source Firm Fixed Price Contract to Terrorism Research Center, Inc. of Burke, Va. under the authority of 10 U.S.C. 2304Â© (1) as implemented by FAR 6.302-1. This is a simplified acquisition. FSC 5820 NAICS 334220 FAC 2005-26 This notice is not a request for offers. The contractor identified is the only known source for the subject requirement. Responses to this notice will be used to determine if bona fide competition exists. Any such responses must be in writing and include technical and pricing information. The Government will not pay for any information submitted. All responses from responsible sources will be fully considered. A determination by the Government not to compete this procurement action, based on responses to this notice is solely within the discretion of the Government. F.O.B Destination See Numbered Note 22. A written solicitation will not be issued. All responses must be received not later than 9:00 AM PST July 7, 2008. No extensions will be granted Statement of Work: Mirror Image Training Course Course Dates: 27 July 2008 to 03 August 2008 Location: Camp Morena, Ca. Number of Students: Thirty (30) Course to be conducted should be designed to replicate terrorism recruitment training, techniques and operational methodology in order to better prepare students to fight the War on Terror. Course of instruction should look towards placing students into simulated terrorist cells in order to receive insight into the mindset and rationale of the terrorist through hands on experience. Cells shall be comprised of approximately eight students per cell with an assigned instructor per cell. Instructors shall have strong backgrounds in unconventional warfare. For instructions and presentations addressing terrorism, contractor shall provide personnel who are high level experts in their field. (CIA, FBI, Department of State, etc...). Contractor will be required to provide resumes for all instructors and personnel providing instructions/presentations throughout the course. Within each terrorist cell, students should be assigned functions that they play throughout the week. Cell Adviser should be immersed with the cell throughout training and provide insight and guidance as the cell plans and executes terrorist attacks. Cells should conduct casing, surveillance, planning and logistics to execute the following types of attacks: ambushes, IED attacks, assassinations form nontraditional vehicles, checkpoint attacks, dealing with black-marketers, customs within a camp (including salat), downed pilot exercise, critical infrastructure intrusion and attack, kidnapping, attack on convoy, military council briefing and a FOB attack. During the course students should be exposed to terrorist ideology worldwide, including: Afghanistan, Iraq, Pakistan, Gaza and the West Bank, Jordan, Lebanon, South America, Northern Ireland, Libya, Indonesia, Malaysia, and the Philippines. In addition to operational planning exercises, contractor should present lessons on: Islamic names and kunyas, radical Islam, selection and logistics of getting to a terrorist training camp, salat and its role in the camps, roots of the global movement, inside al-Qaeda and their 11 year war, inside JI, terrorist strategic planning, terrorist ops planning, terrorist innovations and intel gathering, cell recruitment and internal security, evolution of Jihadists, Afghanistan warlords, Taliban, and Al-Qaeda, targeted assassinations, historic attacks in the Middle East, background behind the 2005 London bombings, Arab society and mindset, history of suicide bombing, resistance to interrogations, intelligence gathering for martyrdom attacks, Al-Qaeda in the US, and lessons learned from over 30 years of terrorism. The course should replicate the customs and culture that would take place in a terrorist training camp, to include training at a remote location and serving Middle-Eastern meals. Contractor should plan to serve two Middle-Eastern meals each day replicating real camps plus an extra tea time with pita mid-day. Contractor should provide students with traditional salwar kameezes and shimaghs during the course and sleep on cots in tents each cell in a different tent. Cost of the course should include all meals, salwar kameezes, shimaghs speaker fees, course handbooks, any other relevant books and reading material.