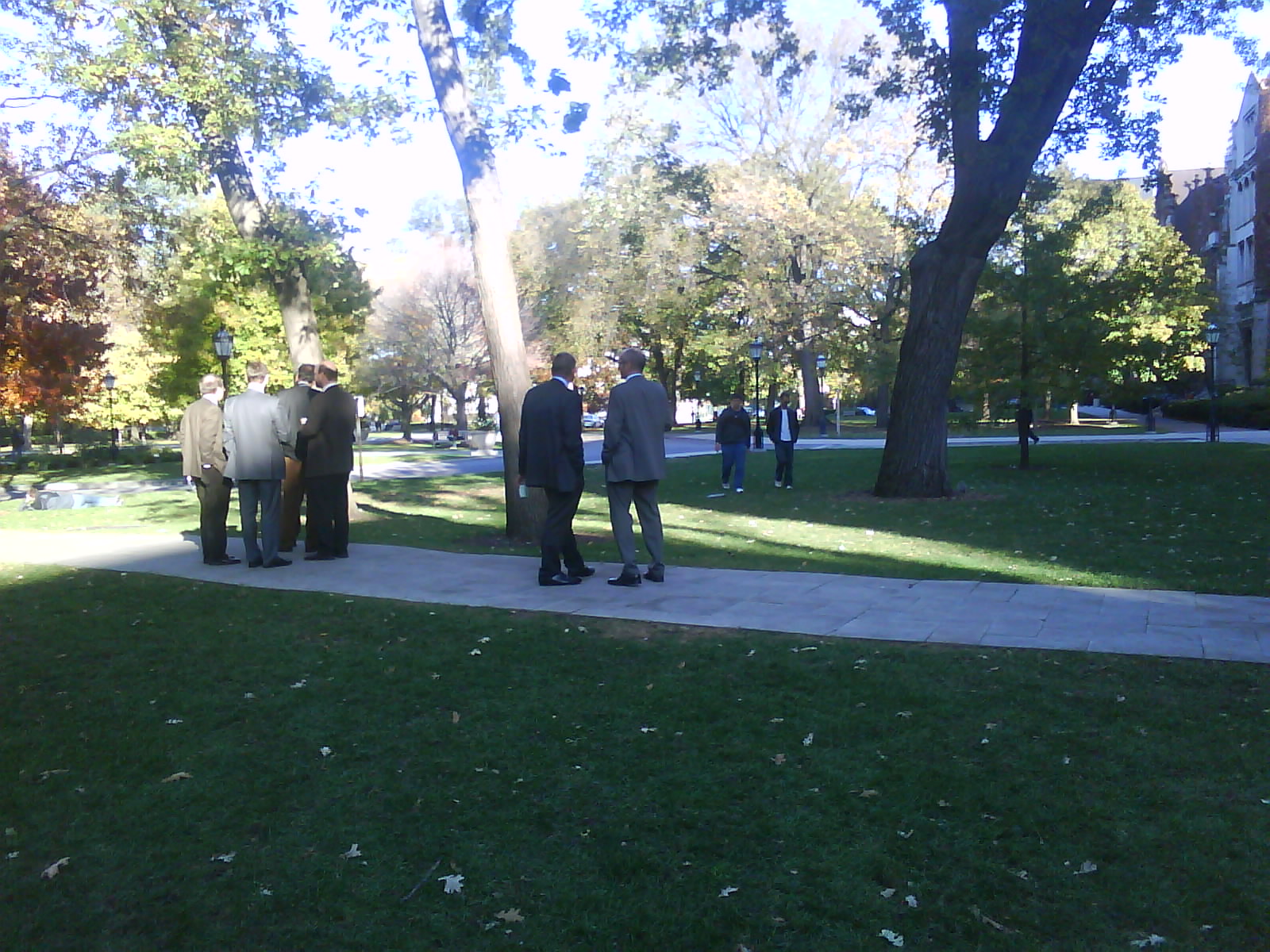 Last night, from Sarah Palin, Keith Olbermann, Rachel Maddow (♥!) and Jon Stewart, I heard about "yet another radical professor from the neighborhood who spent a lot of time with Barack Obama going back several years", "Rashid Khalidi". It is a startling realization; one that has caused me to reassess my impression, and my feelings for Hyde Park. Some of you may not know that Hyde Park has lots of "professors and such". And now, with this bombshell, people are going to look at these innocent workers with suspicion. It cannot be. Let me be the first to defend the Hyde Park Professors as god-fearing, church-going, freedom-loving true-blood Americans who live in the Real America ©. These are not the people we need to fear.

Now, this Khaleeede guy. I have, I am forced to admit, taken classes with him. He led me to believe that he was just some generous-hearted, razor-sharp intelligent, thoughtful, New Yorker who cared deeply about his scholarship as well as his students. I even held him to be a "role-model"; someone to emulate. I was obviously brain-washed.

I will, certainly, undergo the hundreds of hours of "Re-education" that is needed. And I will do it with a smile.

Others, like Juan Cole, can spin a masterful defense of the "idiotic wind" that went through my neighborhood. I will just focus on cleaning up the name of these fair grounds.

PPS: By default, anything Daniel Pipes says is bullshit, but, um, here: Khalidi and the PLO, if you must.

Update: Sadly, the Obama campaign can only manage a how pro-Israel we is defense, instead of pointing out the racism of McCain's attack.

Doggone it, how in the world can Gov. Palin run on the same ticket as someone who has given almost half a million dollars of hard-earned American money be used to pal around with such radicals? And in order to study the "sociopolitical attitudes" of Palestinians? I mean, do real Americans even care about their "sociopolitical attitudes"? We all know that what real Americans *really* want to learn about are Alaskans' attitudes towards secession. (*Wink*)

I was going to write about this but you and Professor Cole have said it better than I could. Three thoughts or observations, from the brief clip I saw on CNN last night of Sarah Palin a) She pronounced his name "KHA-LAA-DEE". b) The crowd appears to have started booing when she referred to him as a Palestinian. The boos got louder as she suggested the 'terrorist' link of course. Professor Cole is absolutely right. Khalidi's only crime is that he is a Palestinian. c) Some of the booing may have had to do with the fact of his being a 'professor'. Rohit

is reading your blog, by virtue of your connections with this fellow, a dangerous and potentially life-threatening activity? inquiring minds need to know.

CM and its gentle readers are already on every possible checklist. Have no fear.

"I have, I am forced to admit, taken classes with him....I even held him to be a “role-model”; someone to emulate. I was obviously brain-washed." Not only brainwashed, but also a terrorist. Hyde Park professors, students, and alumni better be on high alert tomorrow, for HP and their thuggish, communist-leaning, Palestinian-loving and Mastercard Marxist associates are going to get one Halloween they will never forget!

[...] Chapati Mystery plays on Sarah Palin’s mispronunciation of Khalidi’s name: Now, this Khaleeede guy. I have, I am forced to admit, taken classes with him. He led me to believe that he was just some generous-hearted, razor-sharp intelligent, thoughtful, New Yorker who cared deeply about his scholarship as well as his students. I even held him to be a “role-model”; someone to emulate. [...]

Doug Bandow Blog Archive John McCain: He is a Dishonorable as well as Crazy Warmonger | November 01, 2008

[...] discussion of the issue. Likewise Barnett Rubin (”My Friend the Neo-Nazi”) and Chapati Mystery suddenly alarmed about the Hyde Park [...]

Hitchens has called McCain's attack on Rashidi "appalling:" http://www.slate.com/id/2203619/ "If Rashid chooses to state that he doesn't care to be evicted from his ancestral home in order to make way for some settler from Brooklyn who claims to have God on his side, I think he has a perfect right to say so. I would go further and say that if Barack Obama was looking for a Palestinian friend, he could not have chosen any better. But perhaps John McCain has decided that he doesn't need any Palestinian friends and neither do we. Perhaps he thinks it's all right to refer to refugees and victims of occupation, who have been promised self-determination and statehood at the podium of the United Nations and the U.S. Congress by George Bush and Condoleezza Rice, as if they were Hitlerites. How shameful. How disgusting. How ignorant."

Not related to Khalidi, but an Al Jazeera article on whether the Chicago School of economists is on its deathbed: http://english.aljazeera.net/news/americas/2008/11/2008113224029983965.html Sorry, election fever has got me going a bit link crazy :)

[...] Jump to Comments Several other people covered this while I was buried in essay-writing and housing issues last week, but I can’t leave it [...]