First installment of an essay by Prashant Keshavmurthy ((Prashant Keshavmurthy is Assistant Professor of Persian Studies in the Institute of Islamic Studies, McGill University. He spends his days biting his finger in wonderment at the strangeness of pre-19th century Indian and Middle Eastern literary cultures and his nights disentangling the dreadlocks of his affections.)) on the radical disruption of scholarly speech in India. 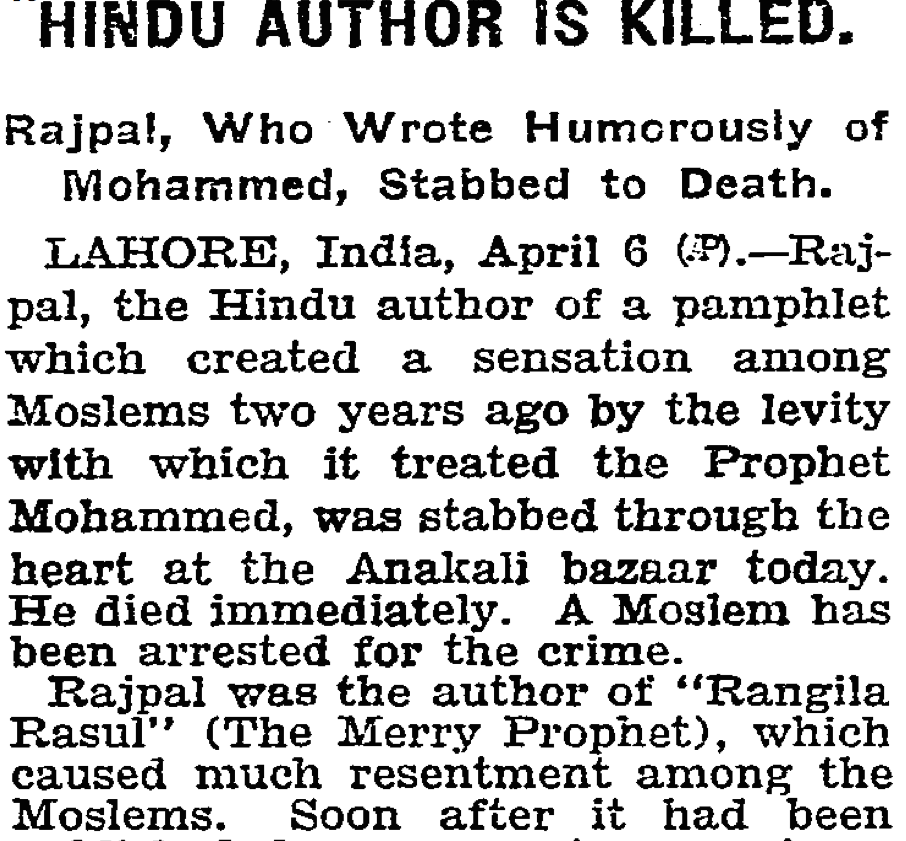 Shall she not find in comforts of the sun,
In pungent fruit and bright green wings, or else
In any balm or beauty of the earth,
Things to be cherished like the thought of heaven? ((Wallace Stevens, “Sunday Morning”, The Collected Poems (New York: Vintage Books, 1982), 67.))

Beginning at regionally varying dates in the eighteenth and nineteenth centuries across the world any thinking describing itself as political in whatever sense has had to simultaneously satisfy two minimal conditions: regard the crowd as a legitimate political actor; and grant ontological primacy to the everyday. These two correlated conditions also minimally define the public.

The former condition originates in the awareness that the people, not the king, are the real locus of legitimate power. The king's once sacred body then vacates an altar whose emptiness, in a sense, begins to constitute democracy. ((I am indebted for this phenomenological theory of the modern political to Claude Lefort, Democracy and Political Theory (Cambridge: Polity Press, 1988), “Power was embodied in the prince, and it therefore gave society a body. And because of this, a latent but effective knowledge of what one meant to the other existed throughout the social. This model reveals the revolutionary and unprecedented feature of democracy. The locus of power becomes an empty place” (17).)) It begins to constitute democracy in the sense that the people's awareness of the impossibility of legitimate power inhering in an individual's body justifies their sense of its dispersal across themselves. Henceforth, the signs of political legitimacy would increasingly be sought and scrutinized, not in an individual's mysteriously inherited radiance, but in the masses of ordinary bodies seen in an ordinary light.

This brings us to the latter condition. The people is made up of bodies standing in the sort of quotidian light that Vermeer, the seventeenth century Dutch painter, helped make imaginable. Rather than otherworldly effulgence Vermeer's is a tranquil window-light, suffusing a woman's stole and cheek as she holds a dully-gleaming metal jug in a basin. Cloth, flesh, wood and metal each come into their own in this profane, diaphanous and impartial medium. To be political in the modern world has meant to gaze at it in this light, to grant that this everyday object-world was more real than any other. After Ghalib (d.1869), canonized as the last practitioner of the traditional Urdu (and Indo-Persian) ghazal, objects in the ghazal never shone so brightly. Displacing the wine, goblets and gardens that were allegorically always more than themselves in the traditional ghazal, the railways, telegraph and bread loaves (“double-roti”) of Akbar Allahabadi's (d.1921) ghazals dramatized the impossibility of such transcendence in a colonial political economy. ((I am indebted for this interpretation to the essays on Akbar Allahabadi by the great Urdu literary critic, Muhammad Hasan Askari, contained in his posthumously published collection of essays, Vaqt kÄ« rÄginÄ« (Tune of the Time) (Lahore: Quasain, 1979).)) Henceforth, the legitimacy of political aims was increasingly to be determined, not in the name of the next world, but according to whether and how it entailed a transformation of such this- worldly and everyday object-relations.

Before it was judged to be totalitarian, democratic, fascist, republican, socialist or communist, political thinking had to satisfy this double condition to be considered political at all. And to be political thus was to grant the reality of the public. This placed the practice of politics under a distinctly modern burden: the people were constrained to derive their norms of action by interpreting the public; that is, by interpreting the dispersal and ambiguity of the signs of legitimate power. Not that pre-modern politics entailed no such ambiguity and interpretation. But such ambiguity in the pre- modern world had still been confined to royal and aristocratic bodies. It had a locus. And so, too, did its interpretation which was legitimately undertaken only by specialists of one sort or another: priests, jurists, an aristocratic peer- group...Now, it was the people at large who scrutinized the signs of the political at large. From this collective scrutiny of an ambient object-world arose the necessarily tentative interpretative consensus over the necessarily provisional norms by which a state was to be organized. To be political in the modern world has thus meant granting the necessity of popular interpretation of the everyday as the means for the disclosure of norms of state.

This throws into explanatory relief the numerous and vehement demands in India, beginning in the 1920s, to censor this or that text “hurtful” to this or that “religious sentiment”. Each such demand assumes the unambiguousness of the signs in question. (Even apparently unambiguous hate-speech is hardly unambiguous when we ask whether, why and to whom it might be important to pay attention to it at all.) This impatience with interpretation is a discomfort with the idea and reality of the public. It is a fear of the semiotic ambiguity inherent in even the most rudimentary forms of representative democracy. It is a demand that legitimate political authority be relocated in unambiguously identifiable bodies. Not in the king's body, to be sure, but not in those of the people at large either. Rather, it is in the body of a demographically determined group mistakenly taking itself for a primordial, monolithic and changeless entity.

This year a judge of the Indian Supreme Court re-criminalized homosexuality under Section 377 of the Indian Penal Code by overturning the Delhi High Court's earlier de-criminalization of it. The Supreme Court judgment declined to even engage the constitutional reasoning adduced by the Delhi High Court when it “read down” 377 “in order to decriminalize private, adult, consensual sexual acts”. This reasoning argued that 377 infringed Article 14 of the Constitution, “which deals with the fundamental right to equality” and “Article 15, which deals with the fundamental right to nondiscrimination” and “Article 21, which covers the fundamental right to life and liberty, including privacy and dignity”. Simply disregarding the specifics of this reasoning, the judgment showed what a former judge of the Delhi High Court has termed an “exaggerated deference to a majoritarian Parliament”. In other words, it violated a fundamental right by citing the numerical minority of the homosexual community. Rather than a republican commitment to fostering a polity whose majorities and minorities were shaped by debates around legally protected values it was the numerical majority of the mob that determined the law. In this the Supreme Court bent its knee before the leaderships of every religious community in India — legions of offended holy men — who, over the four previous years since the Delhi High Court's judgment, had been smugly defending what they claimed were the (heteronormative) traditions of a primordial and changeless group.

Dina Nath Batra, the complainant who filed a case under Section 295A of the Indian Penal Code against Wendy Doniger's The Hindus: an Alternative History for insulting all Hindus, also spoke in the name of what he takes to be such a group. He follows in a long line of Hindu, Muslim, Christian and other such litigants each of whom claimed injury to the “religious sentiments” of their respective group. What is remarkable about Batra's forbears is not that they all similarly mistook colonial census identities for primordial ones. This is, after all, a commonplace by now among those aware of the effects of the colonial census on identity formation among colonized populations: social groups repeatedly identified under specific census categories increasingly internalized such governmental identifications, coming in time to naturalize them. Rather, what is remarkable is the centrality to the formation of such community identities of their emotional response to signs. Beginning as statistical identifications, community identities — especially those of religious communities — in modern India seem to have then been consolidated around rage at the hurt caused by signs taken to be unambiguously meaningful. A certain kind of electorally effective and socially dominant religious subjectivity in twentieth and twenty-first century India seems to have been defined — and to have defined itself — as an intensity of emotion formed like a never-closing cicatrix around a core of hurt.

Counter-balancing the formation of such “affective communities” in the late nineteenth and early twentieth centuries was the imperative felt among native elites to “reform” their respective communities. Reform, always an elite preoccupation, resisted the anxious decisiveness with which signs were decoded as “hurtful” or “offensive”. After all, Reform assumed the need for reform and therefore depended on granting the validity of certain criticisms of group customs and practices. Instructive here is the archive of the legislative assembly debates of 1927 on the popular demand of Muslim populations in the Punjab and North West Frontier Provinces to amend the law concerning offense to religious communities. The historian Neeti Nair has shown that the debates undertaken in the wake of popular unrest over the publication in Lahore of RangilÄ rasÅ«l, an Urdu pamphlet first alleged by Gandhi in his Young India to have been unmentionably offensive to Muslim veneration for the prophet Muhammad, evince an openness to the ambiguities of the text and affair: “The consensus that was section 295A left much to be desired. However, the process of negotiation — the speeches, the interruptions, the contingency, even the urgency — reveal the possibilities for conversation and dialogue that were still available in 1927” (Nair 2013, 337 — 338). ((Neeti Nair, “Beyond the 'Communal' 1920s: The Problem of Intention, Legislative Pragmatism and the Making of Section 295A of the Indian Penal Code”, Indian Economic and Social History Review 50, 3 (2013), 317 — 340.)) Nair upholds such openness as a model for the deliberative practices the Indian polity must adopt today.

However, this openness, as Nair herself notes, only characterized the miniscule minority of Indians who had the power to decide, in however limited a way, on the laws of the colonial state. It was only such Indians who responded to British Orientalist denigrations of Islam or Hinduism, not by threats of violent disorder, but by writing tracts, travelogues, novels and poems. Furthermore, a consideration of the wider body of Reformist writings discloses even an elite anxiety over the indeterminacy of the signs of the religious identity of a place, person or thing. I pause here to interpret a case of such Reformist anxiety over the ambiguity of signs for it will let us understand the earliest entwinement in India between the political (as I have described it in the opening paragraphs of this essay), the public and religion- as-hurt-sentiment.


Profanations II: The need for the public practice of the humanities in India | March 07, 2014

[…] installment (part 1 here) of an essay by Prashant Keshavmurthy.1 on the radical disruption of scholarly speech in […]