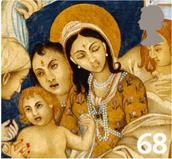 In the Chhatrapati Shivaji Maharaj Vastu Sangrahalaya, also known as the Prince of Wales Museum of Western India, lives an unattributed 17th century Mughal painting of Madonna with Infant Jesus.

The Royal Mail decided that the painting was cool enough [and it sure is] to put it on their 2005 Christmas Stamp collection - along with a Haitian, Aboriginal, Native American and Italian madonnas.

The Hindu Forum of Britain, on the other hand, thinks this is really uncool:

Royal Mail sources claim that the original painting printed on the face of the stamp is dated 1620. While many people doubt the authenticity of the age of the painting, we believe that even if this were true, it would be insensitive to use it at a time when the issue of conversions in India has been a subject of heated debate. Even if we accept that an artist in 1620 AD took the artistic license to portray practising Hindus worshipping the Baby Christ, we should be asking if this is politically and sensitively correct in the 21st century,â€šÃ„Ã¶âˆšÃ‘âˆšÏ€ added Ramesh Kallidai. â€šÃ„Ã¶âˆšÃ‘âˆšâˆ«We therefore urge the Post Office to withdraw the 68 p stamp immediately or issue a redesigned version that does not have the Hindu markings on the foreheads of the two characters in the stamp.

Come on, folks. Is Valmiki's Ramayana written in Qur'anic calligraphical style also insensitive? And "redesigned"? It is not a "design" to begin with! I know that the Hindu-kitsch is over-the-top and offensive. I don't like seeing Ganesh on underwear or on Madonna's forehead either. But, there is a difference between a marketing exec's decision to stamp "Indic designs" to sell the allure of the East and the Royal Mail's quite well-intentioned celebration of the universality of human faith. I am not a Christian. But, I dig.

With Yom Kippur, Diwali and Eid overlapping this year, perhaps, we can all celebrate the ways in which our histories intersect rather than collide.

I beg of my UK readers to drop me a postcard. With an appropriate stamp:)

update: From Gauvin Bailey's The Indian Conquest of Catholic Art: The Mughals, the Jesuits, and Imperial Mural Painting*:

After inviting the first Jesuit missions to court in 1580, Akbar ordered his artists to paint hundreds of iconic portraits of Jesus, Mary, and a panoply of Christian saints in the styles of the late Renaissance to adorn books, albums, jewelry and even treaties. These images were used in court rituals and major royal festivities such as coronations. The dramatic culmination came when imperial throne rooms, harems, tombs and gardens were prominently adorned with mural paintings of Christian figures. Astounded and delighted, European travelers wrote home declaring that the Muslim regime was on the verge of conversion. They could not have been more wrong. Far from capitulating to Western cultural superiority, the Mughals took European material culture and put it to work for themselves.

Bailey goes on to describe the various uses Akbar had for the Jesuits and pointedly notes that such indiginized paintings and murals were "intended only for a the select group of elites who gained entrance to the Hall of Public Audiences" and not to "offend the religious sensibilities of the general public".

err...I am a little ambivalent on this--it does seem like the opposition has a point. perhaps my reservations arise out of my ignorance and sepoy can elaborate a little more: was this painting truly intended in the spirit of universal humanism or was it targetted to converts...perhaos placing the image in its historical context will help? sepoy?

of course, i appreciate the sentiment that you express...and im all for it, in fact i personally feel very strongly about it!

reminds me of (i believe its midnights children) the whole thing with jesus being blue and mary pereira eh?

If you really want it, email me your postal address and I'll see what I can do. The fact it's a 68p stamp makes it somewhat easier. I think I know the postcard for you..

Give Address - Will post. :) It's beautiful. And with offers pouring in - you can surround yourself with Mughal Christmas Cheer!

oh, that is gorgeous, and i think it will mean a lot to a person very dear to me. must go out and buy some promptly. reminds me of the year a friend put USPS's (also lovely) Eid stamp on all her Chanukah cards, which caused some interesting fireworks. At one time I used them on various sorts of correspondence to the Middle East, on the grounds that the juxtaposition of "USA" and "Eid Mubarak" in sulus script might be pleasingly thought-provoking. also they are just very pretty. does anyone know if they're still available?

I was thinking same as hoopoe. Like people Islamize or Christianize things same way the painter Hinduize Jesus and seems like Jesus converted to Hindusinm. ... No blasphemy intended but this is what you end up thinking.

hoopoe: "was this painting truly intended in the spirit of universal humanism or was it targetted to converts...perhaos placing the image in its historical context will help?" the tradition of painting madonnas in localized settings is quite tremendous. The arrival of the Jesuists in Akbar's court bought many of these styles creating new hybrids. Seeing your blog-name, you'd be interested in reading this. I will go get another Madonna from the library and post on it soon. Also of interest should be Kunal Basu's Miniaturist. elizabeth: the Eid stamp is still available [and lovely] and my stamp of choice whenever I buy some - an extremely rare event, nonetheless. and to all well-wishers in UK, willing to drop me a line on a postcard [with the _right_ stamp]: Address: 1115 E 58th Street Walker 202B Chicago, IL 60637

I can certainly see why the Hindu Council *might* be offended by the public use of this image. By interpreting the painting only in the context of contemporary debate on Hindu conversions to Christianity., however, they have excluded other possible interpretations, some of which are much more neutral. The painting clearly could be seen as both culturally and religiously syncretic, folding Hindu and Christian traditions into one. A third interpretation might be that the painting adds Mary and the Christ Child to the Hindu pantheon, assimilating key Christian figures to Hindu faith, rather than assimilating Hindu believers to Christianity. Why assume that the *worshippers* are somehow "the converts" in the painting?
Does anyone know where to find the complete painting?

Gerry you are right. I have had attended and had discussion with several Hindu lecturers on religion (all of them were Brahmin's) and they believe that they are on the top and try to define the Hinduism in a way that everything else falls under it. So I go with your third interpretation that "the painting adds Mary and the Christ Child to the Hindu pantheon, assimilating key Christian figures to Hindu faith, rather than assimilating Hindu believers to Christianity. Why assume that the *worshippers* are somehow "the converts" in the painting?"

I think all the hullabaloo is uncalled for. It's a beautiful painting and should be treated as such. It will be a shame if the Royal Mail caves in and withdraws the stamp. It is indeed a sad state of affairs that the first conclusion members of the Hindu Forum drew was concerning Hindus converting to Chirstanity and not the potentially (and quite possibly, intended) syncretic nature of the painting that Gerry mentions.

Emullah: I think the concerns of the Hindu orthodoxy are justified. Every religious orthodoxy is more or less insecure about the threat of usurpation. If I am not mistaken, there is an insistence in mainstream Islam to avoid the adoption of non-Islamic religious symbolism; I know this because at a point in my life I was considering growing dreadlocks and came across some information on the web in regard to Islamic perspectives on dreadlocks. On a sidenote, I never did grow dreads...but anyway. I don't think the concerns of the Hindu Council should be dismissed just like that, even though I don't agree with their objections to the painting. I really don't know how to resolve a conflict of interest such as this. I want to be able to respect the view of other people (recognizing that some people more or less are working with an indispensible teleology, which is very dear to them...people fall apart when their "things fall apart") but at the same time, how does one come to terms with the Taliban destruction of the Buddhist monuments? I don't even know if that is a correct analogy. But this is my dilemma. Sepoy: thanks a lot for the links :-)

this is all superb. but what about that other, grayer, figure in the upper right corner? i say: put a "Hindoo marking" on her and watch what goes down.

I think when people Indianize, or Brazilite, etc the religious figures the real identity of the person is lost. Heretics have always questioned about the identity and existance of Jesus. The KKK has its own claims so who jesus belonged too. Jesus who said I am the Man, his person is lost in all the controversy and social baptization. An social baptization (culture based paintings) will make the myth even more stronger down the generations and people will keep questioning who he was and did he ever existed and there is voting going on to find out if bible is accurate in characterizing who he was. So much scepticism about one man despite all the good work he did and good words he said.

Hi - sorry to come into this 2 years late! I'm trying to track down a hard copy of this painting and I'm wondering if you've any ideas?

sarah: I seem to remember seeing a reference for a reprint in an Art journal; but its been a while. It _does_ exist and the usual search indexes should bring it up.