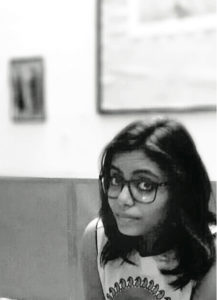 [Shubham Shree's irreverent Hindi poem "Poetry Management" has been awarded the 2016 Bharat Bhushan Agrawal Prize by renowned Hindi author Uday Prakash to howls of rage from the Hindi poetic establishment. Below, I share my translation of the poem, and Hindi poet Mangalesh Dabral explains what's got them so mad. Urdu readers can check out Aftab Ahmad's translation by clicking here. Many thanks to Hindi poet Asad Zaidi, editor of Three Essays Collective, for introducing me to Shubham Shree's work and to Aftab Ahmad for invaluable translation assistance.]

(Translated from Hindi by Daisy Rockwell)

Unprofessional profession!
Part time!
Why didn't I do some MBA-type thing?
It'd be a blast, man!
I'd write a poem; the SENSEX would fall
The poet Mr. So-and-So has written a poem against capitalism
The SENSEX has fallen
Chatter on the channel
This is an example of the fall of American imperialism
Will America be able to control poets inspired by Venezuela?
Assurance from the Finance Minister:
Have faith, small-time investors!

The RBI will immediately increase the repo rate
Hubbub in the media
A contemporary poetry collection is coming out:
What do you think, how will the common man, the aam aadmi, deal with this collection?
SMS your response to us
But hey, the glory of the CPO (Chief Poetry Officer) will skyrocket!
Ads will show up for every program:
Reliance Digital Poetry
makes life poetic
Tata poetry--
every word just for you
People will hang poetry in their drawing rooms
Ooh, it's so lovely!
Seems like something by someone from Sahitya Akademi!
No, sir, it's imported
The original is worth millions of dollars
This one's a copy
Children will write essays:
When I grow up I want an MPA
LIC Poetry Insurance:
Your dream is ours too
DU, Poetry Honors, cut-off sky-high
The girls have come in first again
in the PAT (Poetry Aptitude Test) exams
Students have burnt the VC in effigy
protesting PAT reservation cheating
Approval granted for eight new poetry institutes
At only three years of age, three thousand poems memorized:
India's tiny miracle
America, anxious about the situation in Iran--
defeated by the Farsi poetic tradition!

This is All India Radio
Now you'll hear the news in Hindi from Seema Anand
Namaskar!
Today the Prime Minister departs for a three-day International Poetry Conference
All the country's poetry groups are participating
The Foreign Minister made it clear that India will not change its poetry policy for any price
The India-Pakistan Poetry Negotiations were again unsuccessful
Pakistan demands India retract its claims on Iqbal, Manto and Faiz
China again tested new poetic adornments
Sources say these adornments will now create the most powerful
poetry collections in the world
India's foremost poetry producer, Mr. Wandering Loverâ€”Ashiq Awaraâ€”died at dawn today
More attacks on Dalit poets in Utter Pradesh today
In the meantime, in games, for the third time running, India
has won the gold medal in Antakshari
India won the match in straight sets, 6-5, 6-4, 7-2
That's the news for today!

Dude, this is fun
Keep talking
I'm gonna be a hero
Handing out autographs everywhere I go
It's gonna be awesome, dude
Shut up, man
Third Division MA
Who's gonna pay for an MPA?
Enough of your bullshit!
Sit down and proofread

Twenty-five-year-old Hindi poet Shubham Shree is in the eye of a poetic storm. Her poem 'Poetry Management' was selected for a prestigious award established in the name of the late poet Bharat Bhushan Agarwal for 2016 by the well-known poet and short story writer Uday Prakash, one of the jury members. The selection gave birth to a huge uproar on social media, with a number of people damning the poem because it apparently mocked the business of writing poetry in a world full of careerism, pragmatism and worldly wisdom. The propaganda was so viciousâ€”bordering on vulgarity and misogynyâ€”that some senior poets who are active on Facebook, etc., had to come forward to defend the young poet and poem in question. The entire episode became disgusting, not to mention depressing, for the young poet.

Shubham Shree has been a research scholar at Jawaharlal Nehru University, a renowned institution, much maligned in the recent time by the Bharatiya Janata Party Government in India and many communal ultra-rightist organizations affiliated with it. She has a number of brilliant poems to her credit. Most of her poems deal with the inner world of the Hindi academia, leftist politics, male chauvinistic behaviours and radical feminist discourse. Much to the chagrin of the bosses in Hindi academic world, she has kept dissecting the reality behind the mask of scholarship at the level of higher education. Irony, dark humour, questioning and extremely playful language have been her weapons of dissection. With these, she has created a niche for herself in a short time while remaining aloof from the literary hullaballoo. The uniqueness of her questioning is evident in one of her much-discussed poems, in which she asserts that the cleaning staff in the university refuses to handle the menstrual pads of the girl students unless they are completely covered in newspaper, while nobody has a problem with underclothes full of the stains of male semen. 'Rather,' she writes, 'there are many hymns in praise of semen.'

Shubham's poem 'Poetry Management' deploys some of her favourite weapons. On the face of it, the poem does mock poetry itself and highlights the fruitlessness of the act of writing poetry as it does not serve any worldly purpose. It's an 'unprofessional profession.' Then the poem proceeds towards a playful fantasy of imagining the importance and might of poetry where everything, from the SENSEX to all of world politics is impossibly overshadowed by poetry--which in the end becomes 'bullshit'. This makes the poem a hilarious, and absurd, experience. But this is just the surface of the poem and behind it, we can perceive the intense irony at work. However funny this construct may appear, its bricks and mortar are made of empathy and compassion for poetry. Reading between the lines, it scoffs at the insensitivity of the world around us, which is highly competitive, management—oriented and opportunistic. It brings to light the futility of managing poetry in the world of business management. We can hear the lamentation of poetry itself beneath the comical faÃ§ade of the poem. As in many of her other poems, here too Shubham breaks away from the traditional, accepted, 'literary' mould of poetry, and tries to create a structure that is 'non-literary' and 'non-poetic', and is more prosaic, more functional and theatrical. What we get in the end is an intense critique of our times, where the MBA has become the central concern of the humankind.

Sadly, those who misunderstand 'Poetry Management' have simply shown how business management has clouded our ability to see beneath the surface of language and read between the lines.

BUT why to denounce critics as such. Every criticism is valid, and should be welcomed, provided it's bereft of vulgarity and misogyny. Is it not? Why to get unnecessarily emotional? Rather, it becomes incumbent upon the poet and their awarders to talk more and more about poetics so that uninitiated like me gain some ability to peep into poetry

I am amused to c that this translator is so obsessed with the critics...nd We r not bestowed with such profound vision to c beyond nd beneath:-)RIP retards..

[…] features while appearing to shun them. The original text is available here. Daisy Rockwell’s translation is […]