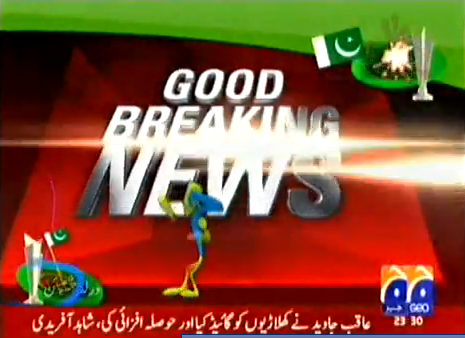 "I'm the second Khan winning a World Cup for Pakistan, so I'm very proud of my Khans," said Younis. "This is my dream. I dreamed all the time of lifting the World Cup. My thinking in all my career is that I will be remembered for a team like 1992. I was not in the Imran Khan team, and this is a dream come true. I'm really happy. Though this World Cup is Twenty20, at least we won our second World Cup. This is a gift to our whole nation."

What do you know ... those three good Talibans - Shahid Afridi, Umar Gul and Younis Khan - gave a gift of smiles uncountable.

We wus robbed! LOL! Seriously not looking forward to the gloating from my Pakistani colleagues, but well played. Sri Lanka didn't really turn up!

it was the most incredible night i have ever experienced in pakistan - the aftermath of that win... absolutely insane scenes in the streets of karachi. 17 years in the waiting, it was so worth the wait! :)

Don't think anything will beat the '92 final though. I still remember bunking off school with all my friends to listen to the match on the radio. Plus, it was England in the final :-)

thabet: I am sure today's schoolkids will say the same bout '09.

Younis' moving appeal to teams to tour Pakistan was really touching. But the problem is that I don't see any way out of this morass: other teams are unwilling to tour Pakistan, and the victory is unlikely to change it. Actually (the BCCI's smugness notwithstanding) the whole cricket world is on the verge of a precipice: England resumed their tour to India after the 26/11 attacks (just barely); the IPL was shifted to SA (yes, it clashed with the elections, but it would certainly not have been shifted if the attack on the SL team in Lahore had not occurred), and before the latter decision was taken, the NZ board had refused to clear its players to play in India, and when the SL civil war was winding down, the Australian tennis authorities did not allow a Davis Cup team to visit Chennai -- any more attacks would raise serious questions about the World Cup in India as well. [Aside: Miandad's dog-in-the-manger attitude on the whole thing is also unhelpful, not to mention eyebrow-raising given he's now related to Dawood Ibrahim!]

Aside: Younis Khan has long struck me as one of the nicest people ever to lead a cricket team...