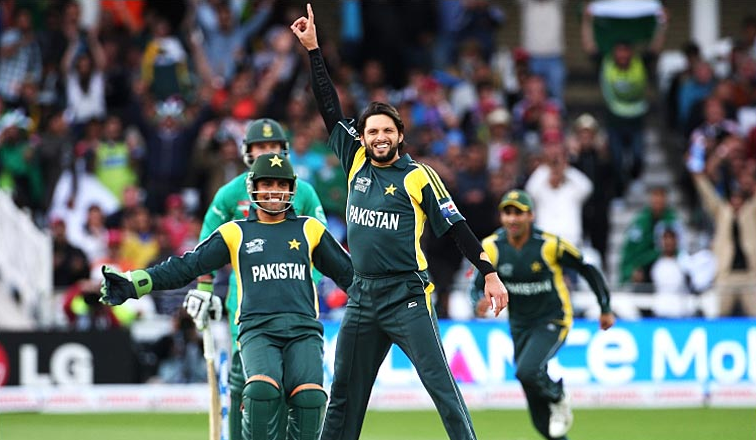 If it worked for Zia, it could work for Zardari.
Pakistan beat SA in ICC Twenty20 World Cup Semis.

ps. I cannot believe my blood pressure still goes up watching these things. 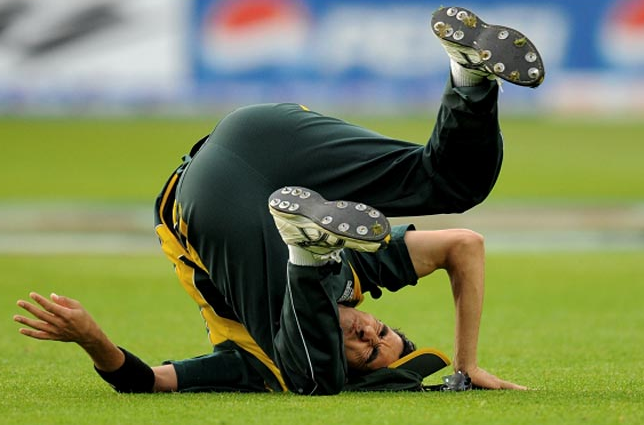 for the record, that bearded guy in the middle is one of those "good" taliban.

The thought of Shahid Afridi being Taliban anything is making me giggle. Also, I have for the longest time had a soft spot for the SA team (weird I know - but its a hang over of loving and crying over that 1999 team) and as of now I want to punch something. I mean seriously, when the fuck will they stop chocking?!

He is silly like us; his gift survived it all.

Szerelem: I have heard of "non-natives" having soft spots for WI, or SL, or Pakistan...but South Africa?! Takes all kinds... :-)

what is it with pakistanis manufacturing the essential rock stars everytime? i don't know a better celebration in world sport than the finger pointing, chest puffing look around... agree with you on the blood pressure thing - it's so infuriating, especially as this time around one had to go through it in matches involving holland and ireland as well...

Qalandar: ha, yes I'm probably one of the outliers! :) I was for the longest time obsessed with Rhodes and Pollock and also liked very much Kirsten, Gibbs, Boucher, Klusner - you get the drift, basically most of the Cronje era SA team. And then everything just kept going downhill from that 1999 WC semi final. I do like Smith though, but overall have more or less shifted loyalties to football!

for the record, that bearded guy in the middle is one of those “good” taliban. Does that even qualify as a beard by 'Taliban' standards?!

Sahibzada Muhammad Shahid Khan Afridi is a Tebleeghi Jamaat devotee, like numerous former (and current) players, some of whom have successfully laundered their pasts with their association with that group... (yes, match fixing)... In Afridi's case, it is a peccadillo worth forgiving if he keeps performing the way he has been of late...

Twitter outplayed all other social medias in this T20 Game. http://techflipper.com/2009/06/21/green-revolution-hits-twitter-—-t20-world-cup-final-pakistan-vs-sri-lanka/ Every single shot, every single wicket pours in thousands of tweets as if twitter is their virtual cricket stadium and they did something very astonishing, an entire new trend — they changed their display pictures to Green.

... and he does just that! Congratulations everyone... given the situation at home, this victory is sweeter than '92 in a lot of ways... Tonight we celebrate!

Congrats to all Pakistan team supporters! Given the challenges Pakistani cricket has been facing over the last couple of years, this will be a welcome boost I am sure. And, in keeping with the "pan-desi" vibe on this site, I note that all 4 finalists in the 2 20/20 world cups so far have been sub-continental teams...

Qalandar: Nice. Though, in terms of subaltern reach, the 1983 Ind-WI World Cup final at Lord's may take the cake.

Actually, my comment got me thinking: in fact, even w/r/t the ODI world cups, 6 of the 9 world cups have featured one desi finalist (3 of them winners); the last five have all done so (2 of them winners, Pakistan in '92 and Sri Lanka in '96). In a historical sense Bangladesh has really under-performed: despite flashes of brilliance, there has been no sense that the team has become stronger in the decade since it was accorded official status. [By contrast, even historic under-performer India had shown far more consistent threat in its first decade (1930s); SL was a slow starter, but by 1992-93 was clearly significantly improved from when it was granted official status in the early 1980s; and Pakistan had won a test match in England as early as 1954.]